IN ART, as in life, things become tangled. Ideas collide, inspirations wind together, and the results can be extraordinary.

“Entanglements,” curated by Lisa Jaye Young and Melissa Messina, brings together the work of six female artists—three from Savannah, three from Atlanta—in an expansive, thoughtful exhibition at Laney Contemporary. 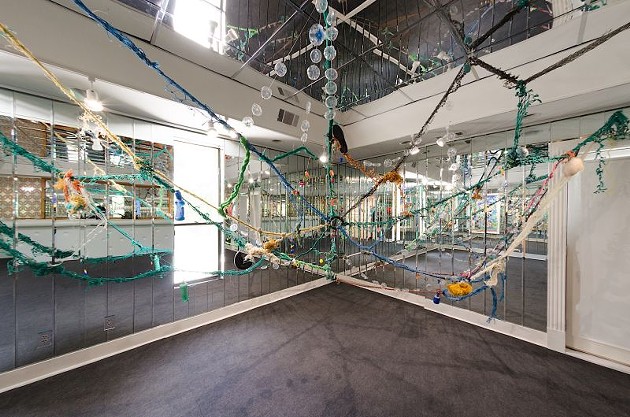 Young and Messina have worked together in writing and editing through the years and were glad to co-curate for the first time and establish more dynamic, creative pathways between Savannah and Atlanta.

“We were excited to be able to not only use this opportunity to bring some Atlanta artists to Savannah, but to bring Savannah artists to a new platform,” says Melissa Messina. “Part of the impetus for the show is, ‘What can Lisa and I bring that Susan [Laney] doesn’t already do so well? It was nice to be able to bring these artists together who have not shown together before and show all the ways in which their work connects to the theme of ‘Entanglements’ and the way their works are sort of entangled with one another.”

Of particular interest to the curators was the fact that the artists didn’t know each other prior to the exhibition.

Young was considering the work of Sargent and Norwood and the way they both used line in their work, and that’s partly where the idea for “Entanglement” began.

“We were thinking about, what is entanglement? It has all these different cultural aspects, physiological aspects, formalism and the line work and the digital culture,” ponders Young.

“I work a lot in my curatorial practice with abstraction and where notions of abstraction come from,” says Messina. “So many of the artists are using line work or abstracting the line in a way that is very laden very rich in its context. Sometimes, it’s purely formalism, but for the most part, all these artists in this show are thinking about that line work, their materials, their processes, how all of that’s coming together, and what is the larger metaphor for that? How do we tease out some of those ideas of artist being magical people who are able to process and infuse their work and their thinking with where we are at this time and space?”

Of course, Longobardi’s work fits right into that larger metaphor. Longobardi creates work with found plastic as a commentary on environmental preservation and stewardship, and she has said, “Not only is no person an island, no island is an island.”

In a moment of serendipity, one of James’ pieces in the show is titled “Entanglement II,” which the curators chose for inclusion in the exhibition before learning the name of the piece.

“It was a natural fit here in many ways, because it’s dealing with the grid so clearly, but she’s along the lines of post-minimalism,” says Young. “She’s working within the formal lines of the grid, but thinking about how to challenge the grid, how to disrupt the grid and all its formal qualities of the grid, which is the sense of order.”

The layout of the exhibition itself is a commentary on entanglement.

“We didn’t want to give each artist an isolated space, but to use it as an opportunity to show how conversations exist between the artists and how their contexts and themes and formal considerations are also kind of woven together and entangled,” says Messina.

Another inspiration for the show was the idea of mapping. 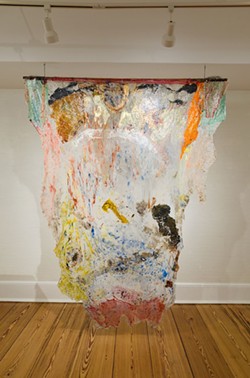 Suzanne Jackson, "Light, light, into Being."

“Each of these artists is using their line work, and that line in its progression and development becomes this sort of map,” says Messina. “As I move through this show, I’m reminded that every piece is almost a map of these lines, which is a map of the artist’s thinking and process.”

The idea of transparency also came into play in the show, particularly with Jackson’s work.

“When we installed Suzanne’s piece here, Liz’s piece hadn’t quite arrived yet, and when it got up on the wall, we were like, ‘Click!’ Everything just clicked together,” shares Messina.

Jackson’s work is also currently on display in a 50-year retrospective of her luminous career at the Jepson Center, and the curators were happy to include her work in the show.

“She’s now having a real moment where the art world at large is paying greater attention to what she has been doing for all these years,” says Messina.

Jackson’s career itself can be considered an entanglement of sorts. From set design to poetry to sculpture to painting, Jackson’s creative process has darted about over the years.

“It goes from figuration to abstraction—she doesn’t move from one to another, she’s moving back and forth. There’s no separation there,” says Young.

There’s a wide variety of media represented in the show, an important curatorial choice for Young and Messina.