Smith chats about doing his career on his terms

COREY SMITH has built an impressive business for himself in music. It hasn’t always been easy, but he’s managed to live an artist’s dream of maintaining a thriving career without compromising artistry. Since his first release in 2003, Smith has issued 10 albums on independent labels and achieved both country and folk chart success.

Ahead of Smith’s show at Grayson Stadium on Fri., May 10, we spoke with him about all things music and what it takes to make it as an independent artist. 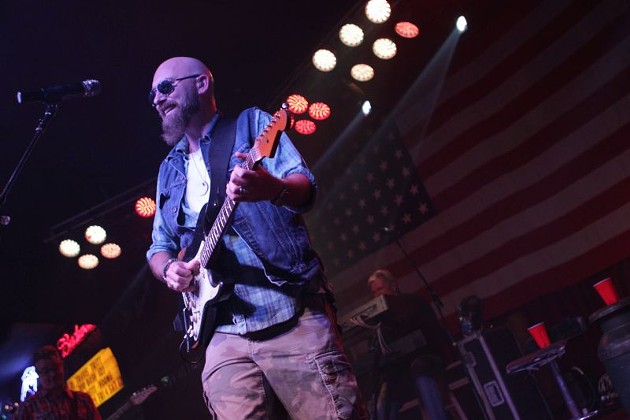 What do you think kickstarted your love of music and writing songs?

Smith: You know, I didn’t really expect to have a career in music. I was a high school teacher for four years. When I was a teenager I played guitar, learned a bunch of covers, and dabbled in writing a little bit. At some point I started going out and playing little bar gigs, just making extra money. At that point I wasn’t really sure what I wanted to do, but then I decided to take my college education seriously.

When I dropped out of college, I was going and playing little bar gigs. I got free food and drinks, and I thought that was pretty cool. But ultimately, I was like, “I don’t want to do this for a living. This would suck.” People were just kind of plunking quarters in me and I felt like a human jukebox. I had songs that I’d written at that point, but people didn’t really want to hear those.

So I just sort of put all of that on the back burner, and took my education very seriously. But then I realized that I still loved playing guitar and writing songs. When I got back into it, I knew I didn’t want to be just a cover artist. So I was able to really focus on how to write songs that resonated with people.

You’ve had this really amazing trajectory in music where you’ve been able to do things on your own terms. Even early on, you did everything yourself when you were making records. Do you remember the moment when you realized things were really starting to take off?

Smith: Oh, yeah. In retrospect, it happened really fast. It’s been 13 or 14 years since I left high school, so that seems like a whole lifetime ago. But back then, it all seems like it happened really quick. The bulk of it actually happened when I was still teaching high school. I was able to make one record because I won an open mic contest and the prize was 12 hours of studio time. I was able to get more bar gigs because I had a record, and then people started sharing the record. Back then you had Limewire and Napster, and then Myspace became a huge thing.

A year later, I’d saved my money from those bar gigs and was able to make another record. And the next year I did the same thing. So I put out three records when I was still teaching school, and they had songs on them like “Twenty-One” and “If I Could Do It Again.” These songs were really growing in this organic, grassroots way. I didn’t even have a manager - the numbers just started growing exponentially. And then, before I knew it, I was the number one unsigned country artist on Myspace.

To me, it seemed like a fortune back then. The one moment that I point to is the first time I played the Georgia Theatre in Athens. It was in December of 2005, I think. It sold out in advance. I remember leaving the gig and realizing that I’d made more money from it than I would make in two or three months of teaching. I thought, “Okay, well, I probably ought to pursue this.”

It seemed like the sky was the limit, but ultimately every time I talked with major record labels it was always an awkward conversation. Because I wasn’t really desperate to move on. Basically, what I was going to have to sacrifice in order to play in that sandbox just wasn’t what I was interested in doing.

Now that you’ve been making records and writing songs for so long, what do you feel like interests you lyrically these days?

Smith: Well, there are only so many themes. There are love songs, there are songs that are introspective, songs that touch on political or social issues, biographical songs - there are only so many themes in life. But I find that with maturity and age, I approach a theme differently now than I would have a year ago or a month ago. Fundamentally, I don’t approach the writing any differently. I don’t make myself write - I don’t do it if I don’t feel like writing.

But now I think I’m much deeper into the musical side of it. For instance, I’m in the my studio now and I’ve been working on a guitar part for the last three hours. Really digging into what glues songs together. Exploring different harmonic and rhythmic possibilities. Each song could be done an infinite number of ways.

Because I’ve done all my records on my own, I’ve only worked with a producer one time. And I will say that that’s one of the things I have missed. When you work with a major label, they have access and funds to get world class producers and musicians that have made hit records. They’ve made the records that people love to listen to, and there’s tremendous value in that.

For me, I’m still in my own little world trying to figure out how to do that. It’s kind of a love/hate relationship because it’s really hard work. On one hand, it’s why I love music - there’s no end to it and there are infinite possibilities [in the studio]. But at the same time, I need to put out music. It’s what I do for a living. So sometimes it’s hard to tell myself to stop and finish something [laughs].