Could SRS be the new Yucca Mountain? 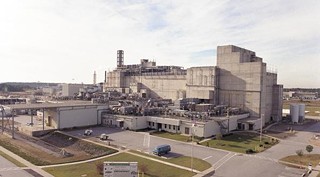 With its federally–funded clean–up projects coming to a close this month, the Savannah River Site (SRS) will send the last of 3000 stimulus–backed jobs packing.

In an effort to consolidate waste and operations at the Dept. of Energy’s (DOE) oldest weapons–grade plutonium plant, temporary workers contracted by the site’s managing entity, Savannah River Nuclear Solutions (SRNS), have spent the last two years sealing off old reactors, bringing down old buildings and shipping out contaminated waste accumulated during the Cold War.

“We’re kind of in celebration mode around here,” says Barbara Smoak, an SRNS spokesperson. “We were glad to be able to provide those jobs, even if some of them were temporary.”

Now that the clean–up is “complete” (while much radioactive debris has been removed from the property, only two of the site’s 49 tanks of high–level, radioactive liquid waste were filled with concrete) and $1.6 billion of taxpayer money has been spent, what’s next?

The Savannah River National Laboratory and the Tritium Extraction Facility, which produces an element to make bombs blow bigger, are already in operation at the 312–mile nuclear industrial complex. A mixed oxide fuel (MOX) production plant is also being constructed (in spite of not having the permits to operate.)

With all this nuclear activity already underway, the DOE just might decide that SRS is also the perfect place to store the country’s spent nuclear fuel.

“It really fits nicely into a business plan,” says Tom Clements, the Southeastern Nuclear Campaign Coordinator for Friends of the Earth.

Clements has been a watchdog of SRS since the mid–’70s, and the Columbia, S.C., resident continues to follow the site closely. “It’s a way get new funding to harness expertise and utilize existing infrastructure. They have ‘boosters’ who want to see this happen. But it’s a bad, bad idea.”

As of now, spent uranium and plutonium from the country’s 104 nuclear reactors has no permanent home. It’s currently stored on site in pools at the individual reactors, or, in a few instances, in dry casks as the pools fill to capacity.

Approximately 65,000 metric tons of commercial fuel have accumulated in the U.S., according to statistics found on the Nuclear Regulatory Commission website.

Up until 2009, the long–term plan was to consolidate this waste in a repository under Yucca Mountain, an isolated volanic ridge near Las Vegas. Controversy surrounded the Yucca Mountain Project, including its ballooning budget, transportation safety and outcry from Nevada residents that storing the nation’s nuclear waste in their state (which has no nuclear power facilities) was unfair. Fulfilling at least one campaign promise, President Obama cut funding for the project soon after coming into office.

But all that spent fuel still needs to go somewhere. The frightening events at the Fukushima reactor last spring made clear that nuclear plants are subject to unforeseen disaster.

Current U.S. fuel storage facilities cannot be guaranteed to withstand hurricanes, earthquakes or terrorist attacks—including those at Plant Vogtle, the two- (soon to be four) reactor facility just across the Savannah River from SRS.

Last year President Obama authorized a Blue Ribbon Commission to come up with a strategy to deal with the end result of American’s nuclear fuel use, which provides about 20 percent of power usage.

“This nation’s failure to come to grips with the nuclear waste issue has already proved damaging and costly,” writes the BRC in its executive summary of a draft report to the Secretary of Energy, available at brc.gov.

The commission has recommended the prompt development of one (or more) geologic disposal facilities as well as a consolidated interim storage facility.

Given that it already has the ways and the means, as well as 3000 people looking for jobs, could SRS be slated to become the new Yucca Mountain?

Or at least the place all that spent fuel goes before the DOE figures out a permanent storage solution?

That was concern at last Thursday’s meeting of the Coastal Group Sierra Club, where about 25 people reacted to a presentation given by Clements, who quickly ran down this and other topics related to Savannah’s nuclear future.

(Other themes included the current rate hikes by Georgia Power to pay for new reactors at Plant Vogtle that won’t come online until 2016 as well as government subsidies to build plutonium “reprocessing” plants to feed a new generation of reactor that doesn’t exist yet.)

“We already live downstream from one of the most potentially dangerous places on the planet,” says Stacy Kronquest, a Sierra Club executive committee member of both the Coastal and Georgia groups and a writer who frequently covers environmental issues.

“People need to understand that bringing in more waste poses tremendous risks for our groundwater supply and beyond.”

The BRC, which is holding a public meeting in Atlanta on October 18, lists “a new consent–based approach to siting nuclear waste management facilities” in its draft. But there is always the possibility that silence may be construed as “consent.”

“If we don’t want this, we’re going to have to push back,” says Steve Willets, president of Coastal Group Sierra Club. “Sign the petition, get on the BRC website and comment.”

There is no official position on becoming an interim storage site from the SRS itself.

“We are long way from a decision on storage at this point,” says Jim Giusti, the DOE’s director of public affairs at the SRS. “The BRC will make their report, and we’ll get a recommendation from the Department of Energy. We can’t—and won’t—move forward until then.”