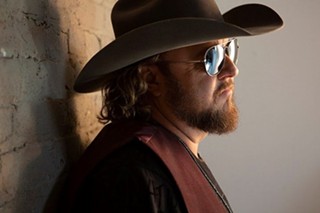 It’s interesting to see the current state of mainstream country music. It’s essentially an amorphous evolution of where country music was in the 90s, with a modern edge in production and hip hop influence.

Years before the genre had reached its current point, Colt Ford was doing the exact same thing. Ford has been recording and touring regularly since his debut in 2008, and has achieved considerable success along the way.

He’s also collaborated with just about every major country artist, writer, and musician you can think of. It’s a truly impressive trajectory for someone doing it entirely on their own label and from essentially a DIY beginning.

Ford is prepping the release of his latest album, We The People, Volume 1, on his own Average Joes Entertainment label. He’ll be celebrating the album launch with a show at Saddle Bags on Sep. 20, the day the record comes out. We chatted with him ahead of the gig.

Mainstream country music these days sounds a lot like what you’ve been doing for over a decade now. Is that weird or surreal for you, as someone who’s essentially a pioneer of the country rap genre?

Ford: Yeah, I guess! I mean, I didn’t intend for that to be. It wasn’t like I set out to do that. It just happened. Looking back at it now, I’ve been doing this for 10 or 12 years now. All of the sudden it’s like, “Oh, we’ve discovered [this genre].” It’s like—no, this has been having for a minute [laughs]. It’s cool though. My first record, you know, we were just trying to make the best songs we could make, and I still continue to do that.

I still try to push myself, try to be the better artist, the best artist I can be for the fans. It is neat to see all the stuff that’s happening. Although it’s funny to me—it seems like I’m kind of more traditional mainstream, and everybody else is further outside. You know, it is what it is [laughs].

That said, how did you land on this fusion of country and hip hop? Were you always gravitating towards those styles musically?

Ford: People always ask, “When did you get into music?” I tell them, “Never. Music got into me.” It’s just something that’s in me. I chase a lot of things, I guess. When I went in to do Ride Through The Country, I didn't have any rules or preconceived notions. I just wanted to make the record and we went in and did it.

It seems like that's sort of a trend you see with people doing more unique musical things. When the most trailblazing stuff happens, you aren't playing by rules or working within the confines of what people think a genre is.

Ford: That's 100 percent what I did, and it wasn't necessarily intentional. I didn't know any better. It was like, I'm just going to make the best songs I can make and then we'll see what happens and it'll be whatever that sounds like. With the country rap thing, it's like, I've always said I'm just a country artist. And I still believe that I'm just a country artist. Talking in country music has been around before the term "rap" was ever even invented. Wyclef Jean said the first rap song he ever heard was "Devil Went Down To Georgia."

Ford: If you really break it down, that's pretty correct. But for me, I just continue to try and make the best music I can make. I push myself to be a better artist—I'm doing a lot more by myself. At the same time, some of the songs that I thought were killer haven't done as well as some of the more hybrid stuff. That stuff's easy, and the other stuff's much harder for me to make. But you don't really know why some stuff works and some doesn't.

Is there a song of yours that you'd recommend for people who maybe aren't familiar with your work and are thinking of coming out to the show?

Ford: There's a few things that are different. "Chicken and Biscuits" is one of my favorites—that's a hit song that's never been on the radio, you know? And "Ride Through the Country" very much establishes who I am. "Dirt Road Anthem," obviously. As you move forward, you get to "Dirt Road Disco" or some of these songs where I'm doing a lot more singing by myself.cs