When the doors of El Coyote opened just this year, they promised not one, but two additional food concepts for Savannah to enjoy within the large industrial building. You will find the chic yet beautiful oyster bar at the very top of building overlooking the west end of Victory Drive.

I asked owner Brad Syfan, who is experienced in running local seafood restaurant the Wyld Dock Bar, why open another seafood spot?

“We love raw seafood and felt like doing something to showcase that passion, that was definitely something we definitely wanted to do,” Brad said.

Since the brand new restaurant is an oyster bar, you must try at least one type of oyster offered. For me, I ordered every mollusk on the menu.

Six different varieties are available served raw and on the half shell.  Two types, the May River and Helena Salt, come from South Carolina.

Both of these oysters stood up to their northern counterparts on the tray, and could easily put the South on the map for offering quality briny and fresh oysters.

A bit further north in Virginia, you will find the Blackberry Point Oysters. They are sourced from the waters of the Northwestern Prince Edward Island before arriving at your table in Savannah. They will stand out among the others you order, because they are characterized as being larger and plumper than most.

The menu currently also offers oysters from Massachusetts, the Nasketuckets, and Maine, the Moon Dancer. Both of these variations are a flavor house of clean salty juice that can be attributed to their cold origins.

Finally, the Beausoleil oysters are from the coldest waters of them all—Canada. The characteristics of these highly prized oysters are meaty in size yet clear in taste.

To be expected, the raw oysters are served with a mignonette, lemon, horseradish, and cocktail sauce. The tin of crackers, made by Auspicious Bakery, are delicious on their own and rich in flavor because of the addition of lard. 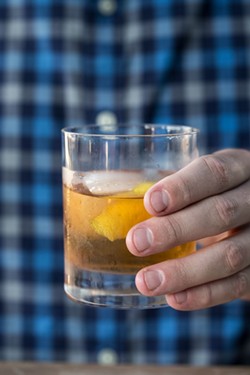 Before ordering my first course of raw oysters, I was sure to select a specialty cocktail that would work in harmony with the subtleties of oysters in the raw. The Forsyth Park Picnic was a homerun, and tasted almost as delicate as the saltwater delicacies.

White rum is infused with lime then paired with grapefruit and blanc vermouth. The final touch is a skewered Luxardo cherry, which was the heaviest flavor of the entire cocktail.

All twelve of the craft cocktails offered at Coyote Oyster Bar were created by Syfan himself. He told me the “twelve unique craft cocktails were made especially for the upstairs and priced so that everyone can come try a thoughtful, meticulously made drink.”

The Isle of Hope Afternoon is Syfan’s “riff on a Caipirinha,” he elaborated as I glanced through the lengthy cocktail list. The addition of aperol sets his version apart, and makes the overall flavor of the cocktail reminiscent of a those red snow cones many Savannahians enjoyed as kids at Seaweeds after a hot summer day on Tybee Beach.

Because my husband grew up on Bonaventure Road, he insisted on ordering the Bonaventure Fox. I would describe this cocktail as a twist on a classic Old Fashioned, the twist being the use of Japanese sake alongside rye bourbon and cherry.

“The Oysters Wyld are something we’ve played with for a long time. They are simple but so delicious. Roasted oyster with fresh thyme, garlic, and bacon fat flash roasted and served hot,” Brad explained, but he forgot to mention the fresh lemon that is served with the dish as well.

Although topped with ultra savory and rich components, the delicate sea-flavored meat of the oyster sitting underneath its topping is not lost. The combination hinted at the flavor of a scampi but with a crunch on top, which was the best part of the entire dish.  The texture of the topping was like that of a streusel you would find on top of a blueberry muffin but the taste was much more savory.

The menu has the largest selection of crudo that can be found around town. Crudo, a preparation of raw seafood dressed with oil and/or citrus, is one of those dishes that I order anytime I am lucky enough to find it on a menu. I devoured two of the three preparations, the Fluke and Hamachi. The final option was the Tuna Crudo.

The Fluke Crudo was served with an arrangement of apricot, coconut milk, thai basil, and green chili. Taking your first bite, you will experience the silky, subtle characteristics of the raw white fish. Next the the slight tinge of pepper hits your tongue before being swept away by the sweet and creamy coconut milk.

The Hamachi Crudo is just as delicate as the Fluke Crudo, but the flavors are balanced by a completely different combination of ingredients. Hamachi is slightly fattier and a richer fish, but it still maintains all of the delicate characteristics of a white fish. The raw preparation is served with a topping red Serrano peppers, pickled pineapple, cilantro, and ginger.

The most surprising dish of all was the Salmon Tartare. I can almost guarantee that most local menus offer some version of salmon or tartare dish that you have tasted or seen before. This oyster bar’s Salmon Tartare is unlike any tartare or salmon I have sampled before, which is attributed to one ingredient—green apple.

The pungency of the green apple hides any “fishy” qualities of the salmon, especially considering salmon can have a bit of an oily taste. What remains in the dish are all of the mild flavors that most love about the fish, tangy crisp apple, acidic lime juice, and fresh green cilantro.

The large crostinis, served on the side, add a bit more fattiness that some may want with how incredibly bright and light the dish is on its own.