Service was founded by Kevin Ryan, a West Point graduate who trained soldiers in Alaska, or “pushed people out of a bunch of airplanes” as he puts it.

THERE MAY be hundreds of different beers from all over the world being consumed during Craft Brew Week and the Savannah Craft Brew Festival, but it’s comforting to know that there several terrific beers being created right here at home.

“I really feel like Georgia has some incredible beer coming out of it and that’s something everybody should embrace and celebrate,” says Carly Wiggins, co-founder of Southbound Brewing Company.

“‘Support local’ is so big right now, so everybody should be drinking a local beer. When we first got into town there was maybe one local tap and we were like ‘there should be ten!’”

It was only a few years ago that Southbound opened up the first production brewery in Savannah. I was wondering why it took Savannah so long to start producing its own beers.

Carly explains: “There was nothing on the books that allowed for production breweries, just brew pubs.”

But, after spending a year educating the city council on how a brewery operates, legislation was finally passed, the gates were lifted, and Savannah got put on the craft brew map.

Carly and co-founder/brew master, Smith Mathews gained experience working for Sweetwater Brewing before assisting a start-up brewery in Charleston, and finally setting out on their own in Savannah. 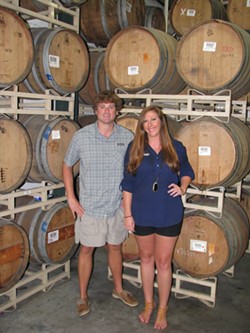 They’ve come a long way since experimenting with brewing in their college days. “The first beer Smith ever brewed in his entire life tasted like a hot dog,” jokes Carly.

Woven into Southbound’s brewing identity is their love of classic rock. “I think music and craft beer just go hand-in-hand,” says Wiggins. “Music is a big part of who Smith and I are.”

Their musical tastes can be seen reflected in the intricate illustrations by SCAD alum Beka Butts that decorate the bottle labels and also in the clever names of the beers. Some of the names are obscure references that only the most devoted music fans would catch.

“As we transitioned into the Atlanta market, what could be better than to brew a beer that represents that?” says Carly.

One technique that Smith has been playing around with is aging some of the beer in oak barrels. As soon as I walk into the brewery I can see the barrels stacked everywhere.

“Smith has a bit of a barrel addiction,” explains Carly. “I say ‘Stop! We don’t have anywhere to put them!’”

At the tap bar, she pours me a glass of a Wild IPA aged in a wine barrel. I’m pleasantly surprised by the amount of winey, white oak character the IPA has taken on.

Southbound is sponsoring the Savannah Craft Brew Festival and will be sharing many of their latest and most popular brews at the event. Some of the beers on tap include Duppy Conqueror, a sour India Red Ale made in collaboration with Moon River Brew Pub, Moonlight Drive, a stout made with PERC coffee beans, and Hop’lin IPA, a smooth finishing, malty East Coast style IPA that may renew your interest in hoppy beers if you’re tired of the harsher West Coast style.

Service Brewing Company, a veteran owned and operated brewery, is also making local beer Savannah can be proud of.

Service was founded by Kevin Ryan, a West Point graduate who trained soldiers in Alaska, or “pushed people out of a bunch of airplanes” as he puts it.

In 2003 he was deployed to Iraq as a company commander. “I lived in a shipping container for 7 months of the time I was over there,” says Kevin.

Meredith Sutton, a SCAD graduate and Kevin’s girlfriend used his military experience as inspiration for the interior design of the brewery’s tap room. Parachutes and flags adorn the walls and shipping containers house the cooler and office spaces.

Meredith also reached out to Savannah’s art community to design a series of tap handles that are displayed by the entrance to the brewing facilities.

Kevin pours me a glass of S.B.C.1, a brew Service crafted for their one year anniversary. It’s an American Strong Ale made with Georgia blueberries, cocoa nibs, honey and vanilla. It’s rich texture and flavor is fruit forward, but finishes with the slightly bitter cocoa and sweet vanilla.

Kevin points out how amazed he is by how much flavor 5 vanilla beans can produce in an entire batch.

Kevin’s passion for beer was ignited when he received a home brewing kit from Meredith for Valentine’s Day. Seven months later he was already making moves to open his own brewery.

“At the time I didn’t have a family to put at risk so it was easier to take the leap,” says Kevin. “No time like the present.”

Some of the recipes Kevin developed at home got carried over, such as a chocolate-strawberry IPA that he’d made for a friend’s birthday and Ossabaw IPA which is brewed with ASI tealeaves.

“Certainly in that short stint of home brewing I was able to carry several recipes into the professional side of things,” says Kevin.

Kevin is passionate about his craft, but there is more to Service than just the beer.

“We made it a part of our mission right up front to give back to charities that support military service and to use the brewery as a platform to let people know about charities that are doing great things, very efficiently, that may not be known to the general public.”

Service will showcase four beers at the Craft Brew Festival. There is Compass Rose, an East coast style IPA with citrus and floral touches, Rally Point, a traditional German pilsner that is their next large scale production canned beer, Honey Saison made with 120 lbs. of whipped clover honey from Savannah Bee Company, and then, of course, a Double IPA.

Breweries like Southbound and Service, as well as Moon River Brewing Company and Coastal Empire Beer Co., are working hard to create a robust craft beer culture in Savannah. There’s a reason the craft brew market is so popular and continues to grow.

“Different breweries have different personalities,” Kevin explains. “They have a different style tendency that interest them and that’s what is most important. Not necessarily brewing beer that you are going to try to please the masses with as much as brew the beer that fits your personality and, most importantly, you have to love it before you can sell it to somebody else.”