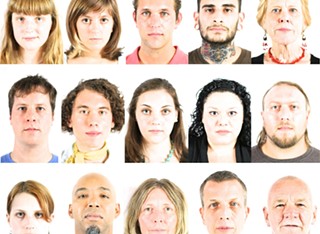 In "The Laramie Project: Ten Years Later," 19 actors portray a total of 54 characters.

On Oct. 7, 1998, University of Wyoming student Matthew Shepard was brutally beaten and tortured in a rural area of Laramie. He died in a hospital five days later, never having regained consciousness.

The political science major was murdered by two fellow Laramie residents, young men who knew that Shepard was gay and had targeted him for that reason.

Both killers were convicted and sentenced to life. The incident set off an emotional debate about hate crimes, which over time led to badly needed special legislation signed into law.

The Laramie Project, a play written by members of the New York–based Tectonic Theater Project, was taken from interviews conducted with residents of Laramie, friends and family members of Shepard’s, and people who knew the perpetrators, Russell Henderson and Andrew McKinney.

Tectonic returned to Wyoming in 2008 and re–interviewed many of the same people, also speaking with Shepard’s mother (now a public advocate for LGBT rights) and, in prison, Henderson and McKinney themselves. This became The Laramie Project: Ten Years Later.

That’s because the Matthew Shepard Act was passed by Congress, and made law by President Obama, in 2009.

“In the last couple of years, we’ve seen so much change in the realm of LGBT rights and legislation,” Coles explains.
“When this play was written, nothing had passed – there was no repeal of Don’t Ask Don’t Tell, the Justice Department was still defending the Defense of Marriage Act. So to me this was a good one to basically say ‘This is where we were three years ago.’ And at the curtain call, I have added an announcement that says ‘This is where we’ve come since this show.’ So many changes have occurred in such a short period of time, and I don’t think people realize it.”

The original play, Coles continues, “was basically getting residents’ perspectives on whether they believed it was a hate crime or not, what they thought the motivating factors were. And also, their opinion on how the rest of the world was looking at them in a fishbowl. Because this could have been anywhere. And unfortunately, for the people of Laramie, it happened in Laramie. And so it became a defining feature for them.”

In 2004, the ABC–TV program 20/20 re–examined the crime, suggesting among other things that Shepard was HIV–positive and, most troubling for those whose wounds were still raw, airing the murderers’ contention that Shepard, like them, was a methamphetamine addict and that the incident was the result of a soured drug deal.

ABC, Coles says, “conducted a very leading interview, making suggestive remarks. As a result, PBS actually did a counter–story, to point out the plotline that 20/20 had established before they even went to Laramie.

“20/20 phrased it as just a couple of meth–heads and a robbery that went bad. And they negated the hate crimes part, which angered a lot of the folks in Laramie because, they said, ‘While we’re ashamed of this, this is what happened and you can’t change the story just because it’s uncomfortable.’”

All of which led to Tectonic’s re–visiting of the story in Ten Years Later. “It actually examines how people’s stories have changed in 10 years,” says Coles. “There were people that 10 years ago said yes, absolutely this is a hate crime. But later, their opinions have changed: ‘Maybe it wasn’t a hate crime ... maybe this was just a robbery gone wrong.’”

It’s not a play in the strictly linear sense; rather, it’s a series of “moments,” of interview and testimony, portrayed by 19 actors as a total of 54 characters.

“This is just after Cabaret and just before Rocky Horror,” he says. “Cabaret is both funny and serious, and of course Rocky Horror is nothing but fun. For a theater company, for the sake of integrity, I think we need to do some serious work as well.”