Going out on a revolutionary French limb 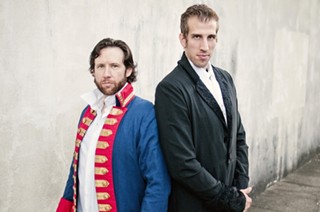 Every once in a while, the creative team at the Savannah Theatre just has to shake things up.

"We like to give the actors the chance to do something different from the musical revues that we do the rest of the year," says Michael Meece, the theater's founder and creative director, the man behind The Beat Goes On, Jukebox Journey and the other razzle-dazzle shows the triple-threat cast puts on for months (or more) at a stretch.

The Savannah Theatre's core cast is good, really good at that stuff, and for 11 years musical revues have put plenty of butts in seats and sent many tourists (and locals) home happy, with a song in their hearts.

Yes ... but still. "It really rejuvenates the cast to sink their teeth into something different," Meece says. "And we like to provide a change of pace for the locals that come and see our normal musical revues, but would like a different diet every now and then."

This week, Meece and company go out on a revolutionary French limb with a fully-realized performance of Les Misérables, for eight performances.

"This is one that we were wanting to do the second the rights were available for non-Equity productions," explains Meece, who's directing the (relatively) massive undertaking. "We actually had our name in the hat, and were on a list to be notified the second that they became available. And literally, we were notified online and grabbed it the very second day."

Les Misérables, of course, has a very, very big cast. Last spring, Meece held auditions for every role in the big historical musical. "When we said this one was totally open, we even made our own people audition for it," he explains. "I didn't want people to think that it was just a done deal that all the largest parts were going to be filled by our own people. It was a fair and square audition, where everybody had the same chance."

On the recommendation of his best buddy, Savannah Theatre regular Sheldon Pinckney, Equity performer Jonathan "Goose" Burgard has been bought in to essay the pivotal role of Inspector Javert. "When you see him you'll see why so many regional theaters around the country have cast him as Gaston in Beauty and the Beast," Meece enthuses. "He has that sort of physical stature." ("Goose" stands six-foot-six.) At last count, Burgard had done nearly 400 performances as Gaston, in as many as six Equity productions of Beauty and the Beast around the country.

Non-regulars in the cast include Richie Cook (Enjolras), Michelle Turley (Madame Thenardier), Les Taylor (Bishop) and Finn Repella (Gavroche). As for the ensemble, "Assorted Convicts, Prostitutes, Beggars, Rebels and Townspeople" (as it says in the script) are played by a combination of Savannah Theatre regulars and those hired during the audition process.

Originally, the Savannah Theatre production was to be the "concert version" of Les Misérables, with the actors — in character, in costume — at center stage microphones.

This, quite serendipitously, has changed.

"We only chose to do the concert version because we assumed that our stage was not capable of having the giant 'barricade' set," Meece says. "But we have a creative way of pulling it off; as we got into the staging we realized yes, we can do the whole thing.