Curious George and his golden meatball

EVERYONE knows Curious George. He’s perhaps the most beloved cartoon monkey in history, and he’s had a continued legacy that spans decades. Savannah Children’s Theatre is bringing the wonder and joy of Curious George to their stage with their production of the musical Curious George: The Golden Meatball, a unique tale directed by longtime Children's Theatre director Carmel Cowart.

“This musical is not based on a specific book. It’s been developed and embellished off of the character and fun storylines that we’re used to where there’s always some sort of conflict and George gets into curious trouble, and has to find his way out of it,” Cowart explains. 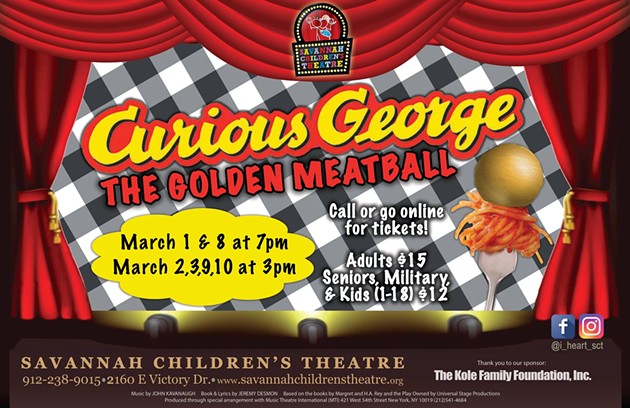 “In this show, he’s traveling to Rome. [Prior to this], he learns how to make meatballs with his friend Chef Pisghetti. There’s a new character in this show who has created a Meatball-o-matic 9000 machine that makes instant meatballs.”

The meatball machine quickly puts Chef Pisghetti out of business due how fast he can produce meatballs, prompting him to take George to Rome to enter the “Golden Meatball” contest.

“They go to the contest to try to prove that the best way to make meatballs is with love and by hand,” Cowart says with a laugh. The director, who’s been with Savannah Children’s Theatre for many years, says she’s excited for people to see the show - which is a fairly new story in the Curious George universe.

“I’m very excited that we chose this one,” she says. “It’s pretty new, and most people don’t know the musical. It’s going to leave everybody smiling and singing and swinging to the beat. It’s just a very high energy and fun show.”

For Cowart, getting to do shows like this one is an extension of a love she’s always had for theater - having done it since she was young.

“I was a theater kid and didn’t have an outlet like the Children’s Theatre. There was very little do for children in Savannah 20-30 years ago. There wasn’t a lot that was geared towards not just putting on a show but educating and inspiring them,” she says.

“It’s been my passion for a long, long time. That’s why I continue to do it. I love to teach and instill that in kids who remind me of myself. This show in particular has been really special. George is fun and lovable and mischievous in a kind way. I love the George stories.”