A veteran local director is back with Falsettos 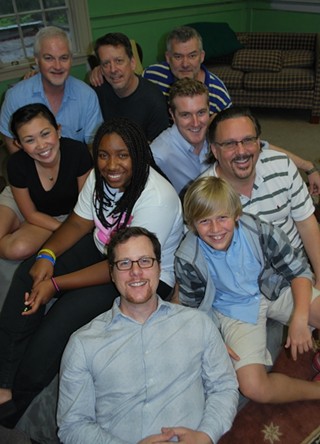 There was a time, somewhere in the middle of the last decade, that DJ Queenan was pretty much the center of our community theater universe.

As theater arts coordinator for the City of Savannah, he directed one jaw-dropping show after another — dramas, comedies, musicals and all those things that fall in the cracks between. He worked with the reverently-remembered Cardinal Rep, and with the also-long-gone Little Theatre of Savannah.

Queenan's final City of Savannah show, Once On this Island, went up in the summer of 2008.

That fall, he created the theater program at Savannah Country Day School — it's just wrapped its fifth successful year — and enrolled in summer classes at Central Washington University in Seattle.

Queenan now has a Masters degree in theater production, and his summers are free. So he's directing again — Falsettos, a musical by William Finn and James Lapine, represents the re-introduction of his theatrical toe into Savannah waters.

Falsettos runs June 14-23, on the weekends, at Muse Arts Warehouse.

"Working with students has been incredibly rewarding for me," Queenan explains. "What I found was that turning a young kid on to theater was so incredibly rewarding that I ended up receiving as much as I was giving. This year, my students won the Georgia Theatre Conference with their one act production of The Laramie Project."

He doesn't miss the city and its teeny-tiny Black Box on Henry Street (anyway, the theater program was tellingly shuttered for good two years after Queenan's departure).

Just as much, he loves Savannah Country Day. "The rewards have just been incredible working in a 400-seat proscenium theater, working with a budget and working with administrative support," he offers. "It's really been great.

"But what I have missed is working with adults."

The moniker refers to a traditional working-class British dish — sausages and mashed potatoes.

"I guess the idea for me is that it's bits and pieces of something hearty that you can take a bite out of," says Queenan. "And that's what I want the theater company to be like. I absolutely love light, fluffy theater, I adore it, but I want the things we do at Bangers & Mash to have more meat to them."

Enter Falsettos, a poignant (and ultimately) uplifting musical about Marvin (Ray Ellis), who's left his wife for another man (Whizzer, played by Dan Finn). It won two Tonys in 1992, for Best Book and Best Musical Score. Variety called the show "A masterly feat of comic storytelling and ...visionary musical theater."

"The great thing about Falsettos," points out the director, "is that it's not just a gay story, it's not just a Jewish story — it's very Jewish, which makes it so rich — and it's not just a story about heterosexual people, or about childhood in a family of divorce ... it's about all of those things."

Queenan first saw the show — which is an amalgam of three William Finn one-acts — as a resident of the New York/New Jersey area in the 1980s.

"I lived there when the AIDS crisis came," he says. "And watched all of my friends die, and my partner. And so this is the tail of the beginning of that — in this play, they don't even know what HIV is. At the time, they called it GRID, Gay Related Immuno Deficiency.

Falsettos preceded Rent, another incredibly moving musical that approached many of the same subjects.

“When I heard this music and went to see the show,” Queenan recalls, “I could, on a human level, relate to what was happening.”