THE WEEK before the Savannah Bicycle Campaign’s annual Midnight Garden Ride is always busy for me. This week before this year’s ride also provided troubling reminders of the challenges we face in making our streets safe for people of all ages and abilities.

And there were bright spots as well. 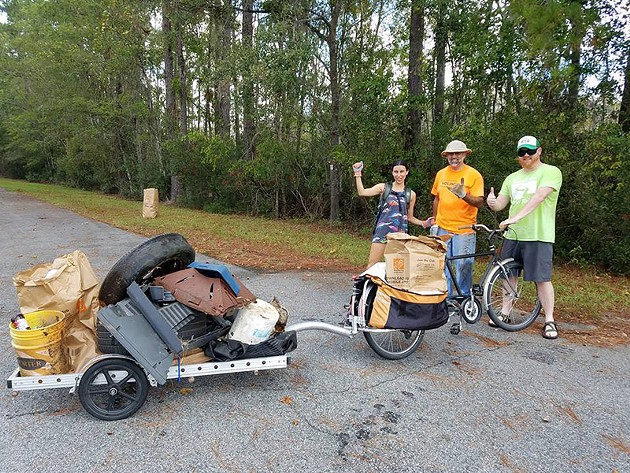 L-R: Jenna Nick, Dr. William Jamerson, and Brent Buice were among the volunteers who participated in a trail clean-up in south Chatham County Oct. 15.

Sunday: A group of volunteers met near the Ogeechee River for an event organized by the Savannah Bicycle Campaign, the East Coast Greenway Alliance, and the Ogeechee Riverkeeper as part of the River Relay, a “3,000-mile celebration of the nonprofit East Coast Greenway Alliance’s 25th birthday and 50 key rivers along the Greenway. Since Aug. 24, the organization has teamed up with local groups to “encourage more people to get out and walk, bike, and run the greenway and explore the rivers we connect.”

Atiba Mbiwan, an alliance board member, and Nedra Deadwyler, a staff member at Georgia Bikes, crossed the Ogeechee River around noon Sunday heading south on U.S. Highway 17. They served as the riders for the Savannah to Hinesville portion of the relay.

While Mbiwan and Deadwyler were preparing to get underway, SBC volunteers descended on the nearby Chief O.F. Love Trail, the only segment of the East Coast Greenway that currently exists in Chatham County. They hauled out five car tires, the carcass of an old TV, and other debris. Most of it was collected from the areas of the trail that are closest to roadways, suggesting it was not trail users who deposited the litter.

Monday: Several miles north of Kings Ferry Park, where the River Relay events were based the day before, James McCurry, 55, was struck by a hit-and-run driver in the 3000 block of Ogeechee Road. McCurry later died. Ogeechee Road has long been a deadly place for people who walk and ride bikes. It is designed to function as a highway, yet also serves as a city street. As a result, people who don’t drive are vulnerable to fast moving cars and trucks as they try to reach their homes, workplaces, and stores.

Tuesday: I was a last-minute, fill-in guest on “Savannah Lexicon,” a talk show on WRUU, Savannah’s community radio station. (Disclosure: I volunteer at the station). I’ve been talking to journalists about bicycle and pedestrian safety for more than a decade now. When I first started, interviewers were eager to hear me condemn people who didn’t wear bicycle helmets or scold people for not using crosswalks (even on streets like Ogeechee Road where they are few and far between). Wayne Waters, host of Savannah Lexicon, took a different approach. He was more interested in how distracted and aggressive driving contributed to unsafe conditions. Waters isn’t alone. I’m finding many journalists now have a broader understanding of how to improve safety on our streets.

Wednesday. Well, last Wednesday was just like any other Wednesday in the Coastal Empire. Traffic crashes happened all over Chatham County. Local television stations reported on a few of the collisions. Those of us who watched the broadcasts also saw automobile manufacturers’ commercials featuring footage of cars speeding on city streets, along with ads in which personal injury attorneys promise to get us the money we deserve for our car “accidents.”

Thursday: Tim Moody, 47, was struck by a driver while riding his bicycle on Wilmington Island early Thursday morning. According to police, “Through thorough investigation, it was determined Travis Ray, 26, was the driver who fled the scene. Ray was arrested and charged with hit and run, serious injury by vehicle, and improper passing of a bicycle.” Moody remains hospitalized as I write this.

Friday: According to police, “A car was traveling on President Street, when a 13-year-old male reportedly ran into the street, in front of the car. The driver was not able to stop in time.” Like Ogeechee Road, President Street is both a highway and a street, an especially dangerous combination when children are nearby. The location of Friday’s incident was near the Pine Gardens neighborhood and within a mile of two schools.

Saturday: Hundreds of people on bicycles issued forth from Grayson Stadium just after 7 p.m. for a 9-mile ride into the Historic District and back. The Midnight Garden Riders outnumbered drivers on every street they used, however, a police escort was hired to provide safety. For some, it is the one time a year they feel safe riding a bike in the heart of our city. For others, it was a chance to share an activity they engage in every day. For one boy, it ended in disappointment. He was sad to learn Midnight Garden Ride doesn’t happen every Saturday night. Hang in there, kid. We’re working on it.