IN HONOR of the Scarborough House’s bicentennial this year, Ships of the Sea Maritime Museum hosts "Crossing Horizons," a retrospective exhibition of Cynthia Knott’s work.

The museum is within the Scarbrough House, built in 1819 for William Scarbrough, a shipping merchant who was principal owner of the ill-fated SS Savannah.

“Scarbrough was an artist, a philosopher, a daydreamer, an eccentric,” Knott explains. “He got this bee under his bonnet that he wanted to have three things going on in one ship. He built this ship that was only about a hundred feet long. It was pretty beamy, plus it had an engine to produce steam, a full set of sails, and then a paddle wheel.”

That’s a lot of different elements at work for just one boat, but as Knott notes, it was built at the height of the local shipping era, designed to maximize the possible output. 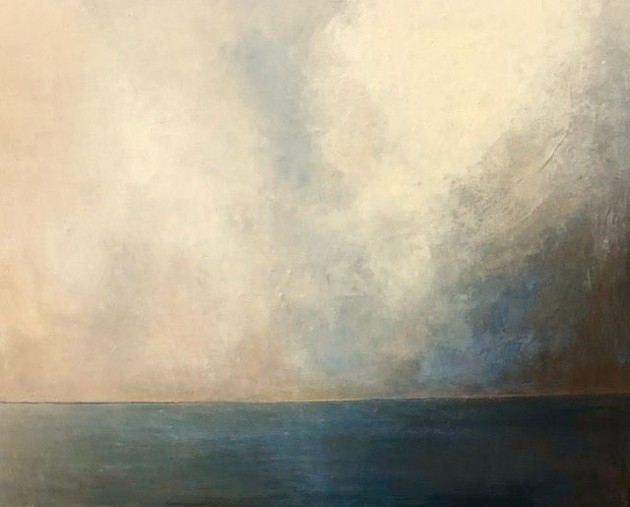 “It gets into port, and they have this really big celebration,” explains Knott. “James Monroe came for the sailing of the ship with William Scarborough to a luncheon party on deck. They took it to Tybee and they had lunch, and they served artillery punch. Monroe deemed it quite a ship.”

Monroe’s proclamation didn’t do much to inspire people to sail on the ship, though—many were afraid of all the elements at work and refused to get aboard.

“They took the paddle off first, and then they started dismantling it,” says Knott. “Eventually, within a year, it became a mail ship. Three years later, it ended up sunk off of Fire Island.”

For such a history, the SS Savannah was only around for one year.

“I find that this is a very elusive, mysterious boat,” Knott muses. “It’s not quite at port, not quite going to get there, not going to have this great history, but they had a wild time on that trip to Tybee.”

Knott was inspired by the ship coming into port and painted “The Arrival of the SS Savannah” to commemorate the event.

“The fog is rising, and the sun is burning up because it’s May, and the ship is coming in and you can’t find it yet,” says Knott.

“You don’t know what it is because you’ve never seen it before. This ship has been in and out of the fog in my painting for months. It’s kind of there, then it’s kind of not there; then it’s elusive, then it comes out.”

That’s a common theme with Knott’s work—she often has to work through the painting to figure it out, and her painting “Bloodline” traces that idea.

“The horizon line takes me forever to figure out where it is,” says Knott. “It goes up, it goes down—it’s like a chess match. I wanted to have his bright red one, and I wanted to have this refining of gold throughout.” 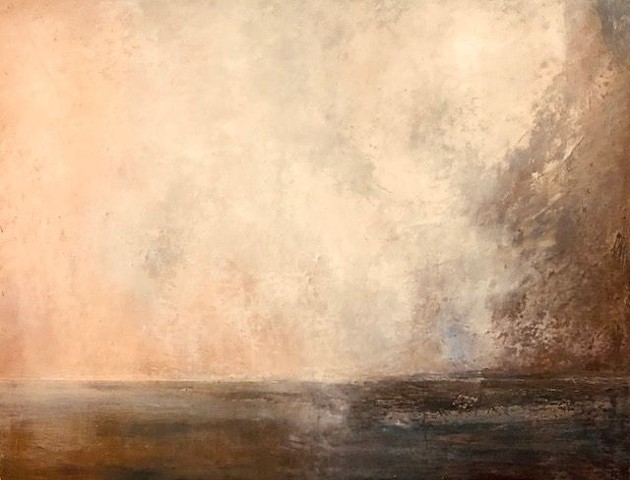 “Bloodline” is also indicative of her fascination with the place water holds in history. She was inspired to paint it after learning about the history of Ebo’s Landing, where in 1803 the Igbo people, captured from Nigeria and aboard a slave ship, committed suicide as a refusal to submit to slavery.

“I wanted some sort of purification. Through the fire they walked through to be in another space where they would fly away home. This is where I first started getting attached to Queen Quet and the Gullah Geechee.”

The legend of the Igbo tribe says that as they drowned themselves, their souls left their body and flew back to Africa.

“I think about the things that are historic about water,” Knott says. “I like to think about Jesus walking on water. You get the vibratory rate of the Igbo tribe and you get maybe a tide that’s coming in on a full moon, maybe you’ve got the wind blowing a certain way, maybe the light is happening a certain way. The phenomena of everything coming together—it was just all this stuff. Of course they flew away.”

Another environmental event Knott took inspiration from is the 1989 sinking of the SS Exxon Valdez and subsequent oil spill into the waters of the Pacific Northwest.

“I was really taken by the enormity of what that was,” says Knott. “This is a big painting, and I had to make a big expression out of something because it went straight to my heart.”

The painting, “Sea of Love,” is named after the Al Pacino film that came out around the same time.

“As I was painting, I noticed I kept putting a heart in it,” Knott remembers. “That was in the time period when Al Pacino did this movie called ‘Sea of Love,’ and I kept thinking, ‘It’s got to be called “Sea of Love.”’ It’s the love of the environment, but also the apocalyptical sky and the woe and terror of the industry and what forces of nature can do. It’s a very strong melancholy.”

Indeed, “Sea of Love” is a brooding piece. Using both tar and copper and done with a palette knife, it’s at once powerful and beautiful.

“It looks like it’s really heavy water with all the oil on it, and the tar looks like the water is going to sink everything,” says Knott.