Damned if you don't

The Savannah Philharmonic takes us on a journey into the afterlife

Peter Shannon’s trademark enthusiasm is at an all–time high. The musical director and conductor for the Savannah Philharmonic Orchestra and Chorus is telling me that Friday’s The Dream of Gerontius will be his group’s best concert yet.

There’s a gleam in his Irish eyes I haven’t seen before. When he talks about the dramatic music and the otherwordly text, he speaks quickly, as if he can’t get the words out fast enough. His hands are animated.

“I think the best way to describe this piece is kind of a melange between a fantasy movie and science fiction,” Shannon exclaims. “It’s this soul that dies and meets a guardian angel – it’s almost like a kids’ story.

“It’s very Catholic in its background, of course, but the idea of meeting a demons’ chorus on the way to hell, that’s right out of a science fiction movie.”

The Dream of Gerontius is a two–part oratorio by British composer Edward Elgar (1857–1934), who’s probably best known for the stately “Pomp and Circumstance,” which we’ve all heard a million times at school graduation ceremonies. He’s also well–regarded for the complex Enigma Variations.

Unlike many of his contemporaries, “He’s not a churchy composer only,” Shannon points out. “He’s most famous for his non–liturgical pieces.”

Elgar wrote The Dream of Gerontius, for orchestra and chorus, around a beloved 19th Century poem by England’s Cardinal Newman. It premiered in 1900.

Gerontius (it roughly translates as “old man”) worries, on his deathbed, whether the afterlife will be everything it’s cracked up to be.

He dies, and his guardian angel takes him on a journey of unimaginable scope; via orchestral dynamics and a rich English–language libretto, we visit heaven, hell, purgatory and all points in between, and hear references to crucifixion, benediction, saviors, demons and final judgements. God himself makes a cameo appearance.

I don’t know, I say to Shannon. It sounds a bit “churchy” to me.

“In fact, it’s a particularly non–churchy piece in that way. Cardinal Newman, and Elgar, meant Gerontius to be somebody on the borderline, who really doesn’t know if he’s going to end up in heaven or hell.”

Part Lord of the Rings, part A Christmas Carol, I think to myself.

“It’s not this kind of heavy, traumatic piece that you’re wading through,” declares Shannon. “You’re going to be flicking the pages, going ‘I can’t wait to hear the next bit.’”

So how does it end? You’ll have to go to the concert and find out.

Savannah Philharmonic Orchestra and Chorus: The Dream of Gerontius 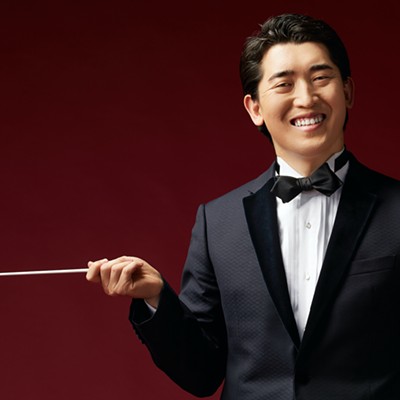