Bay Street Theatre's new show is not your parents' 'Cabaret' 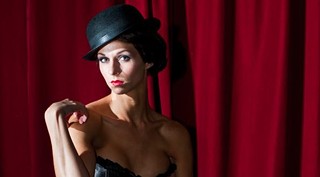 What goes around comes around.

Cabaret takes place in 1931 Berlin; the play opened in New York City in 1967. The Oscar–winning film version appeared in 1972, and in 2003 the look of the show was almost completely overhauled (“deconstructed,” to use the appropriate theater term) in London and became something a lot closer to what Berlin was like in 1931.

Despite all this travel through time and space, the message of Cabaret has never changed: Freedom comes with a hefty price tag.

Set in a seedy, pan–sexual nightclub, Cabaret unfolds as Germany’s tenuous Weimar Republic is crumbling. Hitler and the Nazi party are coming to power, and therefore everyone –and everything – is threatened.

“It was the fall of the ability to be who you were, and to celebrate who you were,” says Jeff DeVincent, who’s directing the show for three weekends, beginning July 8, at Club One’s Bay Street Theatre. “Cabaret is a musical, but there’s a lot of tragic information in there.”

A musical it is, by the estimable John Kander and Fred Ebb (Chicago). History remembers Liza Minnelli, as sexy club singer Sally Bowles, insisting that “Life is a cabaret, old chum.” Or Joel Gray, as the bizarrely made–up Emcee, bidding us all “Vilkommen.”

“It’s not your parents’ Cabaret, as it were,” DeVincent says. “It’s still a robust musical, there’s amazing music in there.

"The music is wonderful, and the theatricality of the piece is pretty amazing to watch, but it’s an historic account – and it’s very, very accurate. Some of it’s not spelled out as overtly as some people might expect in a history play, because it’s very theatrical.”

An air of impending doom hangs over the Kit Kat Club, where most of the action takes place. The Emcee – an unsettling combination of white–faced pierrot clown, drag queen and evil–eyed Fred Astaire – performs one strange (and often perverse) song and dance after another, accompanied by the club’s trashy female dancers.

Decadence is the key word here. It’s all very decadent.

“The Kit Kat,” DeVincent explains, “is a mix of all different kinds of places. The main club that it’s based on is the Eldorado. It was the first trans–gendered gay cabaret. They had everybody there.

“And as part of Hitler’s Night of the Long Knives, when he went around and killed everybody that was gay, the Eldorado was turned from the big cabaret freedom spot to Hitler’s political office.”

And DeVincent has set the club’s musical numbers in the midst of the Bay Street audience. The “serious scenes” – Sally’s unhappy romance with an American writer, the dramatic and comedic interactions between the plot’s secondary characters – take place on the Club One stage.

“I’ve turned it on itself,” the director says proudly. “And the entire set is mirrored, so everywhere you can see action. It was a challenge, but I really wanted the piece to reflect on itself.”

At SCAD, he’d done Cabaret before, among dozens of other shows, and his extracurricular Savannah credits also include a few seasons of The Rocky Horror Show.

As for this new bottle of Cab, he says, “I have not been so excited about a piece of theater in a very long time.”

And, of course, the Kit Kat Girls.

Flood designed the choreography, while the costumes were done by SCAD alumnus Ariel Pellman, who’s now working on Broadway.

“If we just did the songs and performances, that would make the show,” DeVincent says. “But the decadence, mixed with the tragedy of the era, and the beauty of the way they boiled down the script, is just unbelievably striking.”

Club One, he adds, is “the perfect space” for a show like this version of Cabaret. “I feel rather decadent myself, because I’m being spoiled rotten.

“Club One, and everyone involved with it, has spoiled me. I really feel like I’ve found a home with Club One and Bay Street.”