Dark side of the Blackrune 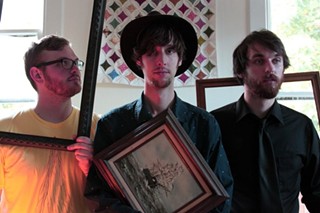 Like an immense, gauzy beast rising slowly from a dark ocean, Blackrune will pursue and envelope you, and swallow you, and pass you on to a strange and multi-hued chemical world where nothing is as it seems.

Well, that may be laying on the imagery a bit thick, but accurately describing this music requires a whole lot of words that Mr. Webster hasn't even thought of yet.

Blackrune is the latest musical project of P.M. Goerner, who used to make atmospheric psychedelia, using computer keyboards and synthesizers, under the moniker Magic Places.

"Electronic music," Goerner says, "was really kind of a refuge for me, when I didn't have the instruments to engage with other people on more of an organic, creative basis. It was a way for me to make music and investigate things when I didn't have any equipment."

Goerner refers to this era as "playing the buttons."

Ah, but Goerner's dad had instilled in him a love of Pink Floyd, and the band's expert use of sonic textures to drive home this dreamlike image or that.

From his mom, he turned on to Neil Young and other iconoclastic singer/songwriters who weren't bound by the shackles of commercial success and its attendant expectations.

In 2012, Magic Places morphed into Blackrune.

"I bought a guitar again, that's what happened," Goerner laughs. "The first instrument I was really trained to play on."

Blackrune is now a live band, too, with Goerner out front, coaxing and drilling his guitar through a bank of sinewy effects, washes and feedback. Chris Goggans plays bass, and Matt McCullough is on drums.

They'll be at Ashmore Gallery Friday, June 28, for a Safe//Sound show, along with Hallucinex and Rivals.

Goerner, an admitted "control freak," is chomping at the bit for the trio to play his hazy shoegaze time-travelogues for another appreciative audience.

"I'm adept at indulging my own imagination," he explains. "And to make that effective, and not just totally indulgent, you surround yourself with musicians that are better than you.

"It's good to be able to split the difference now, to indulge those very personal ideas — but it doesn't really come to life until you bring it back to that organic space and do it with some other people. Find a way to do it live that really affects and engages people."

He's releasing a handful of new studio tracks this week, in conjunction with the Ashmore show.

P.M. Goerner is an artist, in that he's creating his music for himself — and hopefully, you'll tap into it. If not, well that's OK. Like so many artists, he's not making art in hopes of getting rich and famous.

"It's almost like a musical existentialism, in the sense that I look out in the world and I see that there's this huge ocean of voices," he says. "And the whole idea of competition seems really defeatist. It's pointless. It takes away from the idea of people creating their own spaces.

"There was a time and place for that, of course. A lot of times, I feel that the biggest bands in the world deserved to be there, because they worked hard enough to get themselves there, and they were talented enough to do it. It happens so rarely these days because that competition is divided among so many competitors.

"I like this quote from Kurt Vonnegut: 'The idea is not so much to fit in to something that's already defined, so much as to connect like-minded people in new ways.'"