Project includes renovation of nearby historic pharmacy on Broughton Street

Nick Robertson/Connect Savannah
The Kennedy Pharmacy on Broughton Street will house the Davenport House gift shop and staff offices following the renovation.
The Davenport House Museum is a carefully restored landmark showcasing what life was like in Savannah 200 years ago – but the Davenports were not the only family living under this storied roof back then. The Historic Savannah Foundation, which owns and operates the Davenport House Museum, launched an extensive renovation project in December to install a new exhibit that will recognize the enslaved people who lived and worked at the home. As part of the process, HSF will also be renovating the adjacent Kennedy Pharmacy on Broughton Street while constructing an entirely new building for events and meetings, which will be designed to seamlessly blend in with its venerable neighbors. According to HSF CEO and President Sue Adler, the initiative behind creating the Davenport House Urban Enslaved Exhibit began years ago, and was born out of a desire to tell the complete story of life in Savannah during the early 19th century when slavery was a widely accepted practice. “It’s important that we tell the story,” Adler said. “We really have a major story to tell.” The creation of this new exhibit continues an ongoing movement of historic American house museums providing a fuller picture of the enslaved laborers who lived onsite. In recent years, administrators at George Washington’s Mount Vernon, Thomas Jefferson’s Monticello, and James Madison’s Montpelier have all expanded their displays to more accurately reflect the properties’ true history of racial subjugation. Here in Savannah, the Owens-Thomas House integrated the history of its enslaved former residents into the house museum’s exhibitions in 2018, with its Slave Quarters now being one of the site’s most renowned features. According to Adler, the new Davenport House exhibit will present similar insight with the distinction of providing details about specific enslaved people who lived there. “There’s Bella, and there’s Ned. These are real people,” Adler said, adding that the circumstances of the Davenport family were closely intertwined with their enslaved laborers. “Mrs. Davenport, when her husband died of yellow fever, she had 10 children. … The enslaved helped her, and the enslaved had children of their own.” Adler emphasized that the exhibit will clearly state that this arrangement was to the detriment of the enslaved Davenport House residents. “They were very much enslaved,” Adler said. The Urban Enslaved Exhibit exhibit will be situated on the ground floor of the Davenport House, but in order to make room for its displays, the museum’s gift shop and staff offices need to be relocated. This is being made possible with the renovation of the Kennedy Pharmacy – also owned by the HSF – which has recently served as an event space with apartments upstairs.
click to enlarge 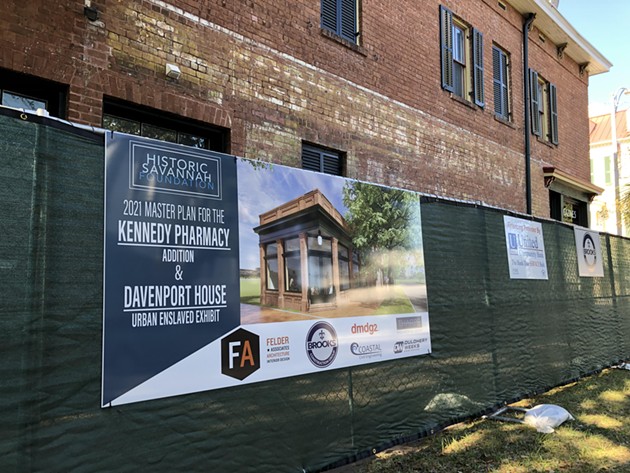 Nick Robertson/Connect Savannah
The Kennedy Pharmacy on Broughton Street will house the Davenport House gift shop and staff offices following the renovation.
These second-floor residences will be converted into the new staff offices, while the Davenport House gift shop will occupy the former pharmacy space, adding a new store to the eastern segment of Broughton. Meanwhile, the new building, to be called the Murray C. Perlman & Wayne C. Spear Center, will fill the role of an onsite facility for meetings and events, Adler said. “It’s very exciting to have a new building,” Adler said, adding that she hopes for it to become a frequent venue for gatherings among diverse local groups. “We really want to keep the community engaged.” According to Adler, the entire project is estimated to cost $1.8 million, and is expected to open to the public in 2022. The Felder & Associates architectural firm is designing all of the renovation and construction projects, with particular expertise in Davenport House history; the firm’s founder, Brian Felder, was the immediate past chairman of the HSF’s Board of Trustees. “After extensive research and collaboration with the HSF building committee, we have curated the educational interior of the Urban Enslaved Exhibit, keeping the integrity and history of the Davenport House Museum while allowing for thoughtful contemplation and reflection of the lives and living quarters of the enslaved who lived and worked in the Davenport household,” Felder said. Adler noted that Davenport House management is striving to keep the museum open throughout the renovations and construction, and that when the entire project is completed, it will benefit Savannah in multiple ways. “It’s going to be wonderful for the city,” Adler said. Visit davenporthousemuseum.org to learn more about the Davenport House Museum.