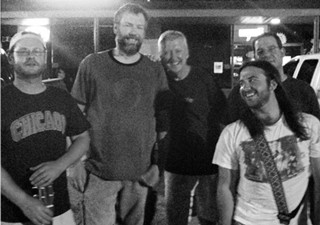 David Lind-Westbrook, bass player for the Charlie Fog Band, sums things up succinctly: "We know that people will enjoy what we're doing," he says. "The biggest thing is figuring out how to reach them, and let them know about us. We're looking for those people who say 'I had no idea there was a Dead cover band in Savannah.'"

Well, allow me. There is a Dead cover band in Savannah. With a name taken from the song "Tennessee Jed," the Charlie Fog Band consists of five guys who've pledged allegiance to the Grateful Dead motto: Musically, there are no rules.

When pressed for a generic description, something that will appease the curious and doubtless confound those who're used to having their music pre-packaged and professionally labeled, guitarist Greg Sonneberg tosses this out: "We're a country-fied psychedelic jam band."

The Dead made a lot of records in their time, but none of the studio works compared to the majesty of the band's epic live shows. Jerry Garcia and company once described themselves as a jazz band that played rock music. Every concert was an adventure, through song selection and song structure (both of which changed dramatically each night) and through the virtuosity, and willingness to experiment, of the various band members.

And that's what the Charlie Fog Band is doing. The song itself is a road map, but the squiggly red lines go in lots of different directions.

"It's hard to put your finger on it," guitarist Dan Berman explains. "You're really looking for a moment in time, chasing it. You're really hoping it finds you as a group. And we hope that the group that we're playing for will also realize that we're chasing that moment together, and they appreciate when it get there.

"It might be a fleeting moment that we're all there, and it might also be a moment that we get there and we don't realize it, and the crowd recognizes it."

The band performs July 12 and 13, Friday and Saturday, at Molly MacPherson's Scottish Pub.

Charlie Fog, which also includes Jim Todesca on mandolin and Mike Carr on drums and percussion (plus, everybody sings), draws from the Dead's vast repertoire, from the impossibly catchy acoustic stuff like "Friend of the Devil" and "Uncle John's Band" to the poly-textured space jams ("Space Jam").

It's an American music road trip (a long, strange one at that).

Says Berman: "You want music to take you somewhere. And as musicians, I think the music lays the groundwork for that to possibly happen. We're not just getting together and dicking around."

Historically, the Dead were sort of a long-haired melting pot, where the "no rules" rule mandated that no music — if the band members dug it — was off-limits.

"I think part of the appeal of the original Dead was that they introduced their audience to Americana," says Todesca. "Songs that hippies didn't hear."

In school, Berman adds, "I was getting turned on to Marty Robbins, Merle Haggard, Johnny Cash, Chuck Berry, all this great American music, through Dead music. You'd go to a Dead show, and you'd hear a rock song, a blues tune, a bluegrass tune all in the first set."

And sometimes all in the first song.

For Sonneberg, who started the band as an acoustic duo with Berman, there's an even sharper point.

"I grew up in Texas, listening to '50s and '60s country radio," he says. "I didn't have any exposure to the Dead. I went to college and somebody handed me a Grateful Dead tape, and said 'Here. You need to check this out.' In my brain, I thought it was a metal band. Death metal, whatever.

"I put on this tape, and there's the Marty Robbins, and the Johnny Cash — it was a Dead show from the '70s — and they did gospel tunes. I was blown away that there was a connection to the country music that I knew. Then I went to see them live, and it was all over."

Carr, who plays djembe at Charlie Fog's acoustic shows, sits behind a full drum kit when the band goes electric. Likewise, Lind-Westbrook gigs on both acoustic and electric bass.

You never know what will go down at a Charlie Fog show. Leave your preconceptions at home and check 'em out.

"I think our biggest challenge is that we don't do the 'Brown-Eyed Girl's and the 'Wagon Wheel's," Lind-Westbrook believes. "We don't do that stuff. It's not that we don't want to make people happy with music. It's just that this is what we do."

More »
More The Music Column »
All Music & Clubs »
Comments (2)
Add a comment
Subscribe to this thread:
By Email