But it's not your typical field trip.

Michelle Obama will personally award him with the National Arts and Humanities Youth Program Award, the nation's highest such honor.

Massey, now a freshman at Woodville-Tompkins, started at Deep as an eighth-grader at Mercer Middle School.

"I thought I was just going to write a few poems and maybe get a chance to read them in public. But, Deep did more than that—it changed my life," Massey says.

"It showed me how to express myself, and through my writing, I reconnected with my father."

Deep Center Executive Director Dare Dukes tells Connect, "André's most difficult relationship in life was with his Dad. He wrote this wonderful poem about that relationship, but he didn't expect his Dad to ever read it."

André's father heard his son read the poem at a recent "Deep Speaks" event, where students in the program recite their own work.

"It really affected his dad and really got them talking. Now André says, 'he's my best friend,'" Dukes relates.

When Massey became a part of Deep, "He was bullied in middle school. He really had a hard time there and certainly didn't see himself as a writer. He'll say it's one of the first places where anyone ever asked him how he felt," Dukes says. "We told him to write about whatever you want, but write it really well."

Dukes says that is a perfect microcosm of how Deep likes to characterize literacy.

"In one way, literacy is a set of skills, like reading a menu and writing a check. But it's also knowing your story and knowing how to tell that story well. It's knowing you have a unique place in the world and in your community. When you tell your story in a powerful way you can change things," he says. 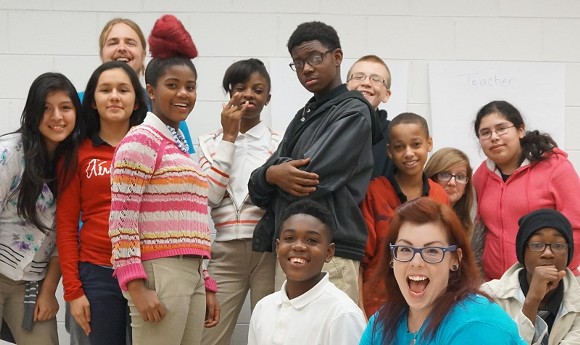 Photo by Melanie Goldy
Group shot of the Deep Center workshop at Mercer Middle School, with André Massey at center.

"Andre is a kid with a lot of passion and a really keen mind but he kept bumping up across obstacles. We don't shove kids in our program who don't want to be. Our value is to meet kids at their joy," Dukes says.

"When you do that you create kids who not only achieve better in school and make for better job applicants—they have the potential to be community leaders."

To that end, Dukes talks about the value of the award not just to Massey and to Deep Center, but to Savannah itself.

"This gives Savannah a moment to really celebrate young people at a time when most stories about young people in Savannah, and especially in the community that Deep serves, are negative," he says.

"This gives a space for Savannah to celebrate some of our kids."

This is only the third time since the award began in 1998 that a Georgia organization won the award, and the first time a city outside metro Atlanta has won.

At the core of Deep Center's efforts are a cohort of about two dozen creative writing volunteers a year.

"But the word 'volunteer' doesn't really describe what they do," says Dukes. "They give 100 hours of their time. Some of those moments are very joyful, and some are very, very hard."

Deep serves schoolchildren who typically don't have access to their kind of programming — and more specifically a high population who qualify for free or reduced lunch, which is essentially every public school in Savannah.

"We encourage them to write about their personal histories, in whatever genre they want to write about—fiction, nonfiction, poetry. We push them toward mastery, because that's also a value," Dukes says.

"We encourage them to honor the fact that their scholarship is fully paid for, and they perceive it as an honor to be in the program, with no stigma about being in the workshop."

Dukes says Deep's writing mentors are transferring their passion to young people who don't always have great opportunities, and it also shines a real light on the importance of after-school programs.

"I hear this in Savannah a lot: People think after-school programs are fancy babysitting, a way to keep off streets," Duke says. "But at Deep we think of after-school programming as way to continue young people's education and development in a holistic way, where we're not beholden to the same institutional structures that people inside the school system are. Deep has the flexibility to both educate and mentor in ways that fit their uniqueness."

Dukes says the case for more and better after-school programming is a case that needs to be made across the country.

"There is a real place for thoughtful, intentional, outcome-driven after-school programming. And I'd love for this award to be an opportunity to have that conversation," he says.

While technically Deep Center and the White House announced the award last week, "We've known since June but it's been embargoed," Dukes says.

"What can I say? When the White House says don't tell, you don't tell," he laughs.

"So we celebrated loudly but secretly in June."

In August, the awardees went to Washington to take part in a unique workshop.

"Part of the award is learning how to do consulting and communicating around the award. So they give you a two-day retreat. We basically created a whole media plan just waiting for the right moment," Dukes says.

"So that's what we've been doing: Grinning secretly until it came time to let the cat out of the bag." cs