Bay Street 'celebrates' the season with the offbeat 'The Eight' 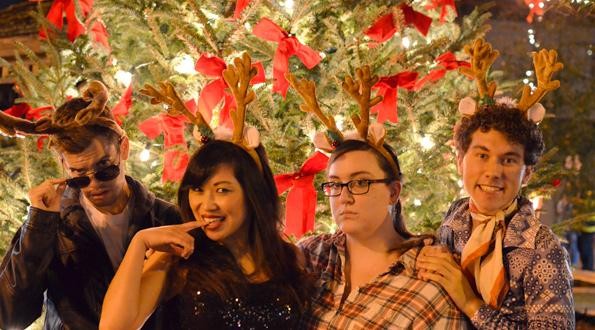 Santa’s reindeer are revolting. Well, they’re in revolt — some of them, anyway. Things are definitely polarized at the North Pole.

The doors are blowing off the cozy confines of the toy workshop as each of the Great Eight comes forward with their own version of Santa’s shenanigans — it seems he has been, um, ungentlemanly to Vixen, the sexy reindeer, and there’s more. Oh, so much more.

“It’s not like we’re ‘waging war on Christmas,’ like Fox News says,” laughs Bay Street co–founder Travis Coles, who’s directing The Eight on the Club One cabaret stage. “But we don’t leave any stone unturned. There’s no sacred cow, so we definitely keep our minds open to anything.”

That’s the Bay Street manifesto laid bare — even Christmas isn’t sacrosanct when there are laughs to be mined, stereotypes to be punctured.

“It’s another one of those shows that you wouldn’t see anywhere else,” Coles adds. “Although there’s not a lot of explicit language, it’s certainly not a family–friendly show, by any means.”

But The Eight, he says, “fits our space. It’s adult humor, for sure. Hopefully it will tie in well with the drag shows over that weekend. Get that kind of crowd to come in and enjoy it.”

The show is a fundraiser for Heads Up Guidance Services of Savannah (HUGS). “Part of our mission,” says Coles, “is to do community outreach and fundraising.”

“She’s at the center of turmoil because Vixen’s accusing Santa of sexual harassment and rape ... and she’s not the only victim. She’s also not a fan of Mrs. Claus either. She’s laying it all out on the line and could not care less if you believe her or not – because she knows she’s up against Santa — the one person who can do no wrong — but she’s going to tell her story anyway.”

(Donner party, your table is ready!)

“Of the Elite 8, Vixen’s closest to Blitzen,” Arango says. “Blitzen’s the one reindeer who supports Vixen and believes that people should know about the ‘real’ Santa. She’s probably also close to Cupid and Donner because they don’t hold back on their true feelings about Santa.

“There’s some tension with the other reindeer because either they don’t believe her story or don’t want to accept the fact that Santa’s capable of such deeds or know Santa’s not exactly innocent, but would rather push it under the rug so that things remain normal for Christmas.”