Photographer and SCAD alum looks at mental health in her mother

"You Have Nothing to Worry About" is part of SCAD's ninth annual deFINE ART event, featuring internationally known artists Janet Cardiff and George Bures Miller as honorees. Taking place Feb. 20-23, 2018, at university locations in Savannah, deFINE ART highlights emerging and established artists and visionaries. For more information and a list of programming, please visit: https://www.scad.edu/defineart2018

MENTAL HEALTH remains stigmatized in today’s society, due in large part to those who don’t understand it. Ask a person who suffers from depression how many times they’ve been advised to cheer up and it’ll all get better.

It’s not a comfortable topic of discussion, but Melissa Spitz keeps the conversation up and thriving with her photography project “You Have Nothing to Worry About,” a physical version of her Instagram account. 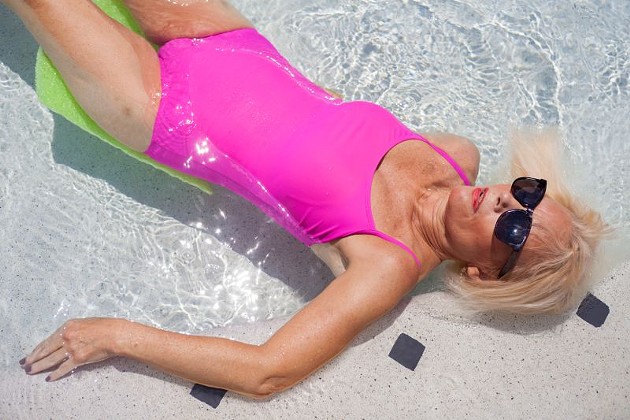 @nothing_to_worry_about started as a platform to share photos about her mentally ill mother and now has over 50,000 followers, earning Spitz the TIME Instagram Photographer of the Year.

“You Have Nothing to Worry About” doesn’t restrict itself emotionally. Portraits of her mother hang next to pill stashes and punched holes in walls. We see Adams bruised after a fall, holding a gun, smiling with her family.

Spitz includes archival material in the exhibition to show the viewers the heart-wrenching complexity of loving her mentally unwell mother. Adams wrote her family suicide notes and directions on how to get money out of her account, then pens poems to Spitz and her brother.

Adams suffers from a battery of mental illnesses, which Spitz has always been careful not to name.

“Because if she has bipolar disorder, that’s not going to make it go away. We live in this society where we think, ‘If I put a name to it, it’ll get better,’ and that’s not how mental health works. It exists on a spectrum. Those extremities can happen in a six-month period of time over a span of three years. It does’n matter what she has. She is mentally ill. That’s something I want to address. I want people to realize that just because you have a name for it, it’s not going to make it better.” 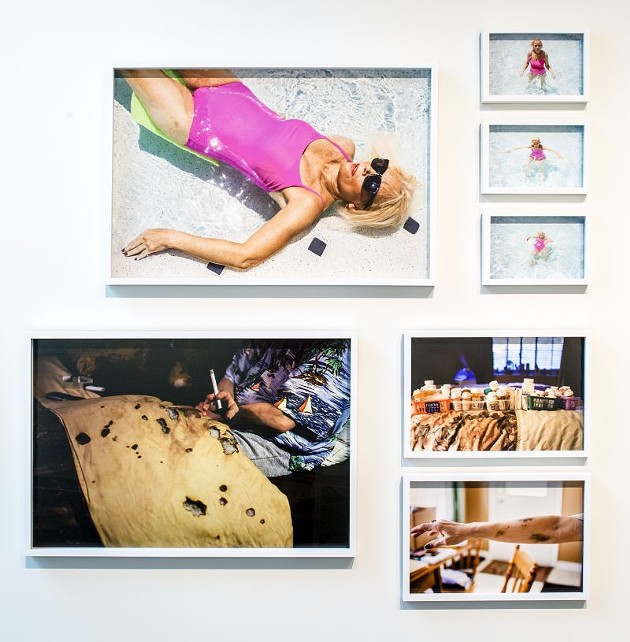 When Spitz was twelve, Adams got cancer and went through a full round of chemo and radiation, something that Spitz suspects intensified her mental illness.

“At my bat mitzvah, my mom was wearing a wig and totally bald,” Spitz recalls. “That was like a light switch. Mom had been institutionalized and in and out of mental institutions, but after the cancer it was just, that was the first time I had to be strong for my mom. It’s not like some people’s parents who have cancer and are like, ‘We’re going to do the race for the cure! We’re going to beat this!’ My mom was like, ‘I’m going to die. This is going to take me.’ Cancer was a really bad thing, and I think she blamed cancer on a lot of other issues. It wasn’t an empowering thing for her.”

Mother-daughter relationships are fraught enough without the addition of mental health, and Spitz found a niche in that.

“There’s not a lot of photography about mental health, but there is a ton of photographers taking pictures of their family,” she explains. “I love family photos. I remember being a kid and being like, ‘Wow, that portrait makes us look so much happier than we really are. We look great!’ And then we’re so messed up at home.” 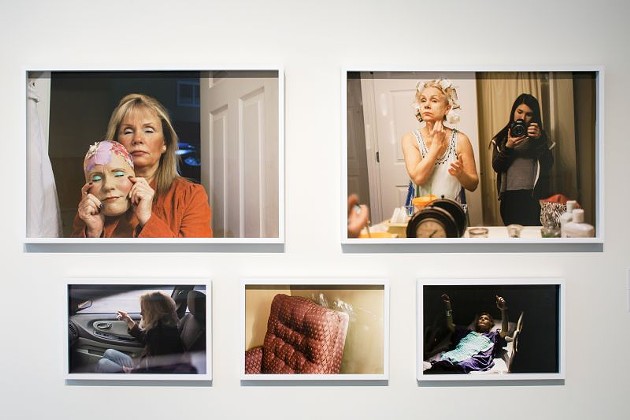 Having so many followers means that Spitz and Adams live their relationship in the spotlight, which proved especially difficult on their last trip together.

“My mom recently had a full mental breakdown I hadn’t experienced since I was 16,” says Spitz. “I felt like I was on a pitching mound in the middle of a baseball stadium with thirty thousand people looking at me. It was this moment where I felt so obligated to share, but then I was like, ‘I don’t have to do this.’ I took a break, I shut the account down for 30 days. I have to step back and focus on my own mental health and what it does for me to put this all out in the open.”

There are also plenty of critics—though Spitz notes her fans always shut them down—worrying about how Adams feels about this project.

“She thinks it’s amazing,” Spitz says. “I FaceTimed her from the exhibition and she thought it was really nice. I showed her [the archival material] and she got really emotional and was like, ‘I can’t believe you saved all that stuff.’”

Though Adams approves of the project, Spitz won’t ever put her on display.

“That’s not her,” Spitz says. “I know people asking my mom questions would overwhelm her and she’ll start overthinking. It could be good for her, but I can’t risk the alternative. The museum has already been kind enough to let us in privately to view it together when it comes down.”

Even through the project, Spitz and Adams’ relationship is and will remain complicated.

“There are times that I think she’ll be normal and I’ll try to talk to her about dating and she’ll be like, ‘Well, your father cheated on me,’” Spitz explains.

“Sometimes I’ll forget. Sometimes she’ll seem so normal and then the response is just out of left field and I’m like, ‘Oh, now I remember.’ But there are these glimmers of hope.”

The exhibition remains at the SCAD Museum of Art through April 29.