In 1975, Dell Belew picked up her first paint set from Kmart. Something about painting had caught her attention, and she wanted to try her hand at it.

When she brought the set home, it raised her then-husband’s eyebrows.

For all he knew, he was right—Belew had never painted before. Determined to prove him wrong, she painted an arrangement on her kitchen table. When she showed it to her husband, he was impressed, but he challenged her to replicate a painting they’d bought from his coworker’s wife.

“Well, if you can paint, paint that,” he told her.

Sure enough, the next day, Belew had replicated the painting to look exactly like the original.

“He said, ‘Well, I think you need to go take some classes,’” she remembers him saying.

Years later, Belew is an accomplished painter and has an exhibition of her work on view in June at the Jewish Educational Alliance. The show, “My Quarantine Challenge,” includes new and revised paintings created during the quarantine. 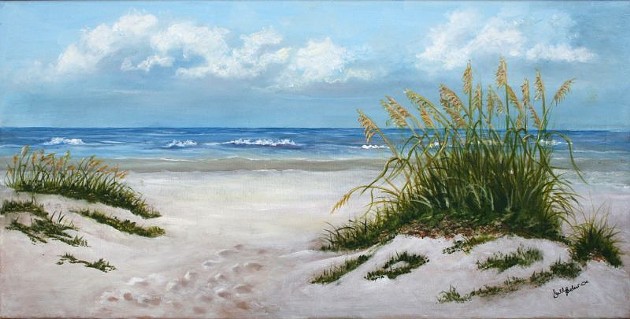 “Early in our nation’s lockdown, I decided to be purposeful in the way I ordered my life,” she says. “I had my share of misfit and discarded painting and ideas floating in my head that I had not pursued, so I challenged myself to get some things accomplished as if I had been given a gift of several months in which no one was keeping me from making it a productive and satisfying break in my life.”

The exhibition, which is one of our art community’s first returns to a physical gallery showing, was planned for April, but coincided with the JEA’s Holocaust remembrance exhibition. She graciously allowed her exhibition to be moved to June, right before everything shuttered.

“I think it might have been providential,” muses Belew.

In her artwork and in life, Belew is a bit of a chameleon. In addition to painting, she’s also a photographer, a painter, and an ordained minister. Her faith is a major part of her creative process.

“When I approach anything, it’s by faith; I know it’s from a spiritual being,” she says. “It’s hard to put an exact point on it insofar as painting is concerned.”

Even her pride in her paintings comes from a spiritual place. Originally, she was hesitant to take pride in her work. One night, she worked in her studio until 3 a.m. and was torn between pride and humility in what she’d accomplished.

“I felt like the Lord was saying, ‘But it’s okay, because I was proud of my son,’” she says. “When Jesus was baptized, the Holy Spirit came and said, ‘This is my son and whom I am well pleased.’ And I thought, ‘Okay, it’s alright to feel good or even brag about myself.’”

Belew’s talent is certainly something to be proud of. As she learned with that first painting experiment in 1975, she’s adept at replicating a scene and capturing its spirit.

Because she’s also a photographer, she often works from her own photo reference.

“I’ve been doing more plein air paintings the last, I’d say, year and a half,” she estimates. “I go out with a painting friend when weather permits, but generally speaking I take a photograph and I finish in my studio. I’m a very slow painter. By and large, I’d say I probably work from my photographs more often than not.”

Belew loves photography as a medium on its own, so when she takes photos, it’s not specifically for painting.

“Photography for photography’s sake is not necessarily the impetus for painting,” she says. “Sometimes they’re very distinctly different, but if it appeals to me to photograph, I’m usually going to find some way to get it on canvas at some point.”

Belew’s versatility is a great asset, but back in the day, that trait was not seen as an advantage by her professor. 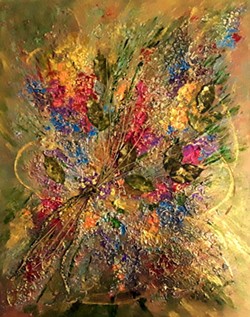 “I had a photography professor who was commenting on my work at the end of the quarter and he said, ‘You know, you really need to decide on a focus: either your photography or your artwork or your writing,’” she recalls. “So I mentioned that to a friend and she said, ‘Oh, that would be so boring!’ If you got it, flaunt it.”

It would be the second time that Belew’s creative talent was nearly stifled by the opinion of another person, but Belew has always stayed true to herself and her own purpose.

While she’s multifaceted, Belew considers her greatest calling to be her writing. She’s an author of over 20 books, most of them teaching inspirational books.

At 73 years old, Belew is still refreshingly passionate about bringing her work to others. Since retirement, she considers herself much more productive; last year’s exhibition had over 50 paintings, and this exhibition also features quite a lot of work.

She’ll continue to create work that she enjoys.

“I paint out of my own desire and need,” she says, “but I don’t need people to like it—that’s not the point.”

"My Quarantine Challenge" will be on display at the Jewish Educational Alliance at 5111 Abercorn St. through June 30. For more, visit dellbelew.com.