Strangelove swings through Savannah for a gig at Coach’s Corner

Depeche Mode is one of those bands that seems to be having a bit of a resurgence, and is even getting popular these days with younger audiences.

The groundbreaking electronic group, perhaps best known by the general public for their massive hits “Enjoy The Silence” and “Personal Jesus,” has a vast and incredibly inventive body of work that spans decades, and the band continues to sell out arenas worldwide.

For those times when you just want to enjoy the music without sitting in nosebleeds or shelling out arena prices, Strangelove is a truly special substitute. They’re also simply a great band of stellar musicians in their own right, but they’ve truly committed to flying the flag of Depeche Mode all over the world in tribute to the synth pioneers and their legacy. 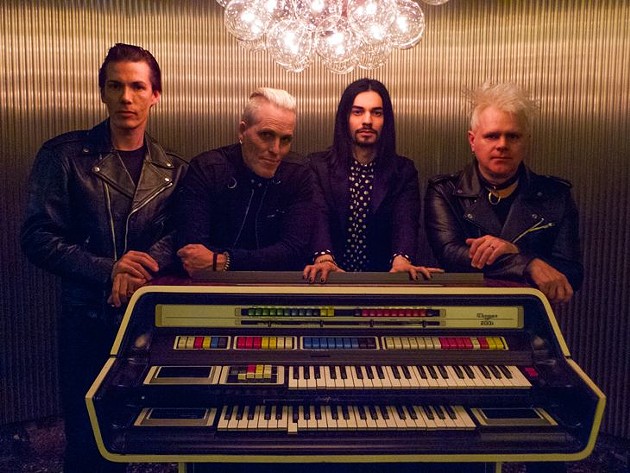 Ahead of Strangelove’s show at Coach’s Corner, we spoke to founder and guitarist Brent Meyer about his passion project-turned-career and what the music of Depeche Mode means to him.

It’s really great to see y’all carrying this band’s music around in the way you do, especially when Depeche Mode isn’t on the road. It seems to open more people up to their catalog as well.

Meyer: Yeah, and thankfully the band shares that view. The members of Depeche Mode are very supportive of us. They typically have a four-year album and tour cycle, and so in those three year breaks I know we help sell a lot of Depeche Mode records [laughs].

What a great thing that they've been supportive of this.

How did Strangelove start? Were you all longtime fans?

I'm pretty much the one constant member, and the music director. The inception of this project began about 13 years ago now, and it's grown and grown into what it's become today. The original kernel of the idea was that I saw a shift with cover band musicians who were looking to do something more upscale. There were only a handful of tribute bands at the time, so I thought, what could I do along these lines that suited my personal musical tastes?

At the time I was living in Los Angeles, which is a huge epicenter of Depeche Mode fandom.They’re enormous out there. It was basically an organic outgrowth of wanting to do something in tribute. Depeche Mode was something I felt I could do that I was passionate about, that didn’t feel like I was a weekend wedding musician in a tuxedo playing Bruno Mars [laughs].

There are several cities we’ve been where it’s the first time into a market, like Houston, Texas. We played a venue that held 1,700 people and they turned away 300 people.

And they’d never seen us, so it was all on the strength of Depeche Mode. They’ve sold 120 million records — they’re kind of a behemoth, but a little under the radar.

I was going to ask about that, actually. Was it part of the goal for you to expose people to the deeper cuts? Because they really are a band who is massively successful but simultaneously underappreciated in terms of their catalog as a whole.

Sure, that’s part of our indulgence. And the crowd loves those indulgences. The fans that follow us love that we’ll pull out some album cuts from Black Celebration that they themselves haven't performed since the '86 tour if at all.

We’ve performed a few songs that they’ve never performed live. We’re enormous Depeche Mode fans ourselves, so it’s half fan service and half self indulgence that we get to play the songs that we love.

What does it look like when you figure out what songs you want to do? Do you all sit down and go through the records when putting together setlists?

Most of that is me, honestly, as music director. I’ve got about 3,500 hours into parts and sound design and backing programming and all of that. We’re up to about 75 songs now out of their catalog.

Wow. Do you change the set a lot?

Absolutely! It completely depends on where we’re playing. In Savannah you can expect a hits heavy set, because the demographic we expect there will be general ‘80s nostalgia. And that’s a safe bet whenever we go into new markets anyway.

But when we play L.A., we’ve done the Some Great Reward album front-to-back plus B-sides. It can be that esoteric of programming.

I think something that some people might not understand about tribute bands is that a lot of the time, it truly comes from a place of absolute passion for the music. That being said, as someone who’s a fan of Depeche Mode and performs the music, how would you sum up what they mean to you?

I would use this analogy — a lot of times people look at tribute musicians in a diminutive light or something like that, but I consider us like Yo Yo Ma or Luciano Pavarotti. We are playing great concert repertoire and playing it to the best of our abilities. That’s our approach.