Half-capacity, temperature-taking are part of health protocol at Grayson Stadium

The Savannah Bananas home opener is July 1. Other home games include July 3, July 5, and July 7. Due to half-capacity, no new tickets are being sold.

Go to thesavannahbananas.com for more info.

WITH MANY other local businesses grappling with how and when to reopen — some having to close again almost immediately due to reinfection — the Savannah Bananas deal with the same challenges.

The beloved college summer league team is set to play their season opener July 1 at Historic Grayson Stadium, the first game of a truncated season with expanded COVID-19 protocol.

But in a dilemma that’s becoming more and more common, they aren’t immune from continued coronavirus worries.

A former employee, Trevor Trout, charges that the team covered up positive tests of nearly a dozen office staff. Trout quit his job as Director of Entertainment, citing discomfort with the way he says the team handled the situation as well as with safety concerns.

The team counters that as soon as the test results were known the first week of June, the employees went into quarantine and every staff member has to get a negative test before they’re allowed near the facilities. 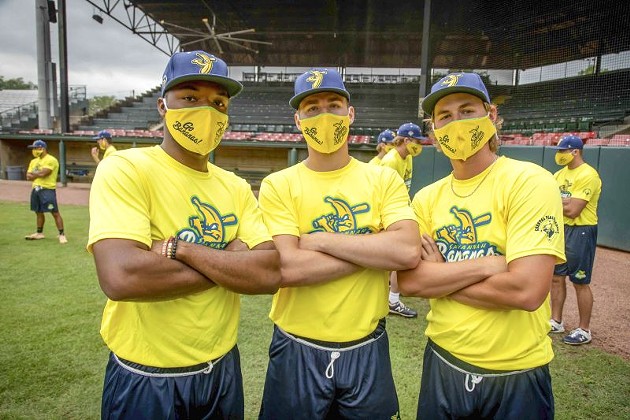 Orton says the team has left no stone unturned in their effort to make the fans’ experience as safe as possible.

“Our big advantage is that we’re an open-air park. The Health Department has said that’s a big thing we’ve got going for us,” Orton says.

Orton says the team is going far beyond the often-vague state guidelines for sports events and facilities, including close cooperation with the Health Department, and some contact tracing.

As far as the fan experience in the stadium, that will obviously be different in key ways from previous seasons.

“We’re reducing capacity by 50 percent, but not reducing staff by anywhere near that much. On the ticket-taking and usher side, there is virtually no staff reduction,” Orton says.

There have been some staff reductions on the food service side, simply because of fewer customers and even more of a move toward self-service.

Half-capacity for Grayson Stadium means about 2,000 people. The team will enforce social-distancing rules, with at least six feet between parties seated in the stands.

“We’re going to have lots of signage basically saying, here’s our role, and here’s your role,” Orton says.

What about the debate that has shaped up to be the biggest cultural touchstone of our time? Mask or No Mask?

“That was the biggest sticking point in discussions. How do you enforce it? Do you kick someone out for pulling their mask down to eat a hot dog?” muses Orton.

“Once you go down that rabbit hole and say it’s mandatory, then you become the mask police and have to enforce it no matter what. And you see how many difficult situations come up.”

In the end, the Bananas decided to basically do the same thing Whole Foods has been doing for quite awhile.

“They’re offering hand sanitizer and a complimentary mask for whoever wants one, and that’s what we’re going to do as well.”

The six-foot rule, however, is different, Orton says. “We can enforce that. We can and will make that mandatory.” 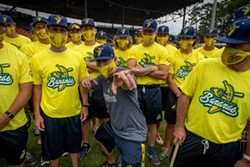 Temps will be taken before coming into the stadium.

Speaking of the team, what is the protocol for the players?

“The way we’re looking at it is, they’re learning new habits,” Orton says. “These guys will all have to employ some form of this protocol when they go back to their college campuses in the fall anyway.”

In this case, the new habits will involve a constant round of COVID-19 tests prior to arrival and again upon arrival in Savannah, with symptom screenings each day and a mask requirement when not actively playing or warming up.

Multiple locker rooms will be used with daily disinfecting, and no communal items.

Originally, the COVID-shortened 2020 season for the Coastal Plain League — the league the Bananas play in, along with “rivals” like the Macon Bacon and the Gastonia Grizzlies, the latter also owned by Bananas owner Jesse Cole — was going to feature all league teams.

But while the Coastal Plain League operates outside the NCAA structure, they are affected by in-state coronavirus protocols.

With different states having different reopening rules, it became clear that the only practical way forward was a round-robin style season down to just four teams: The Savannah Bananas, the Macon Bacon, the Lexington County (SC) Blowfish, and the Catawba Valley (SC) Stars. (Editor's Note: The number has now been reduced to three teams.)

Other Coastal Plain League teams in North Carolina and Virginia opted to cancel their entire seasons due to the stricter reopening protocols in those states.

Another South Carolina league fixture, the Florence RedWolves, also canceled their season due to their home facilities being on a college campus, which has a more strict regimen than other locales in the Palmetto State.