Blouses, Savannah’s own Prince tribute, returns to The Jinx

When he takes the stage on Saturday night, he’ll simply be known as Prince.

It’s a grand return and a final farewell for Blouses, a tribute band that formed two years ago for The Jinx’s annual cover band night.

The group’s moniker is a nod to the classic Chappelle’s Show skit in which Prince and his band dominate a game of basketball, still clad in their lavish stagewear.

Though the name’s tongue-in-cheek, Blouses’ show is a respectful, loving ode to a treasured artist.

“I wanted to do a Halloween band, and there were so many to choose from,” Baumgardner recalls. “So I came to Greg [Rettig] and the heads in our band, Ambrose, thinking, ‘What band could we do?’ I was like, ‘Either Prince and the Revolution, or Rage Against the Machine.’”

With a unanimous vote, Ambrose set to work charting out The Purple One’s hits and deep cuts (fingers crossed that Rage tribute happens one day, though).

When the evening of the gig rolled around, with Baumgardner looking the part in the iconic Purple Rain suit and romatic ruffle shirt—a loaner from Acme Costumes—Blouses was a hands-down audience favorite. Fans begged for a second show, and they got it during the Savannah Sweet Tease’s Valentine’s Day performance.

February 14 doubles as Baumgardner’s birthday, and the band went all-out with a longer set and a performance that got the audience dancing, singing along, and demanding an encore.

Having already played every Prince song they knew, Blouses polled the crowd and, with screaming approval, reprised “I Would Die 4 U” and “Let’s Go Crazy.”

“After that, we were like, ‘Alright, we’re done,” Baumgardner says.

“I first heard of his passing at work,” says Baumgardner solemnly. “I needed to take a break. I had to take a break when Michael [Jackson] died, but it wasn’t like when Prince died. It just hit me, understanding the influence.”

“When I heard, I wasn’t thinking about Blouses, exactly,” he says. “I was thinking of everybody in the band; it was what connected us.” 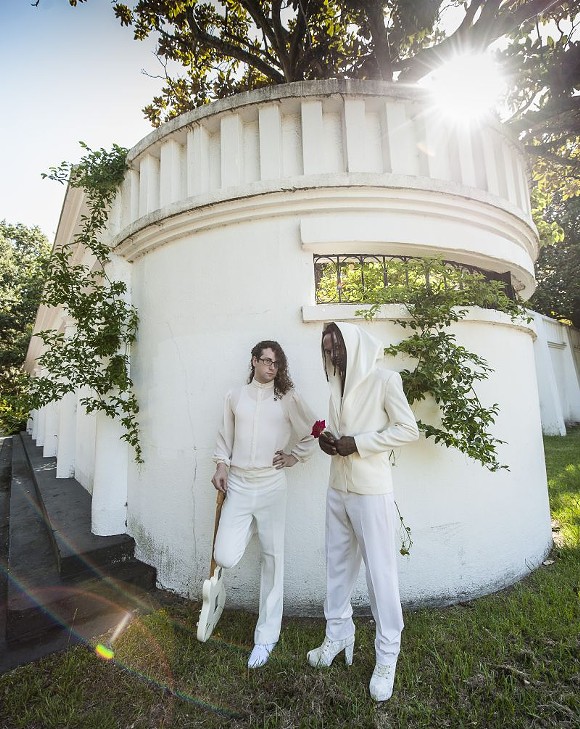 As Baumgardner and Rettig mourned, they decided the timing was right.

“We said, ‘We gotta do one more,’” remembers Baumgardner. “For ourselves—not even for nobody else. We knew we wanted to do it, but it would be really hard.”

Since Prince’s death, tribute shows, themed parties and DJ nights have cropped up around town.

“What makes ours different is that we’re really trying to capture that essence,” Baumgardner explains.

“Nothing against anybody who’s doing a tribute and showing love in the best way they can. With us and the level we’re taking it to with costuming and choreography, we’re trying to take it even further than we have before. All the musicians in the band are really great musicians and performers, and they want to give their best to this artist we all looked up to.”

Transforming into Prince Rogers Nelson takes a lot of practice. Baumgardner poured over live footage, interviews, and listened intently to every song in order to properly capture the legend.

Baumgardner is excited to unveil the new lineup and debut some new-to-Blouses songs—he’s keeping the set a surprise. His favorite song to perform is a new one, and he smiles elusively while keeping it a secret. At previous shows, he confides, he loved singing the delightfully dirty fan favorite “Darling Nikki.”

He’s got the moves, vocals, and stage presence down, but the frontman won’t be donning the Purple Rain suit for Blouses’ farewell.

“Honestly, it was cool, but it was for Halloween; it was more jokey,” he says. “I wanted to take it seriously this time, really dress up and look nice.”

He turned to Savannah’s reigning queen of vintage fashion, House of Strut’s Erica Cobb Jarman. As they flipped through reference images together, Baumgardner landed on a stunning image of Prince clad in head-to-toe white.

Jarman started with some vintage pieces and created a custom-tailored look, finished off with white, crushed velvet heeled boots that would certainly get the Prince nod of approval.

“And once I told Greg about my outfit, he said, ‘We’re all dressing in white,’” says Baumgardner.

It’s a lovely visual: elegant, respectful, evocative of dove’s wings, as bright as the legend himself. Wearing traditional mourning black would be far too drab, and Blouses doesn’t want the event to feel like a funeral.

“We don’t want this to be sad,” Baumgardner says. “We want it to be a sendoff, a celebration of a great artist.”

“You’re not going to want to miss this,” he attests. “It’s probably going to be the last time you’ll see it. This is the tribute we want to end on. We’re going to really be giving it our all for this one.”