Dime Store Red is located at 1313 Rogers St. and is on view Nov. 14-22. To learn more and buy tickets, visit dimestorered.com.

Dime Store Red popped up on Instagram over the summer.

The account first acted like a mood board, with reposted images of Yayoi Kusama in the 1960s and of the work of Christo and Jeanne Claude. Then it verged into weird color studies, like a white shoe dipped into orange paint and sushi being painted green.

Over time, more of the mystery worked itself out in real time: Dime Store Red had a Kickstarter to help fund the project. The project directors were graphic designer William Kesling and painter Juliana Lupacchino. There was a car involved.

Everything about Dime Store Red is strategic and intentional, right down to its name. 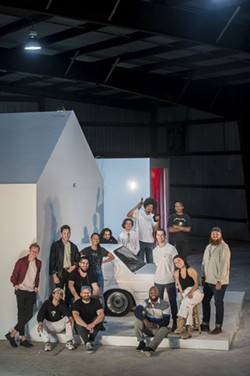 “We were talking to someone and they were like, ‘What’s a dime store?’” adds Lupacchino. “We wanted it to be fun; even if you don’t know what a dime store is, you want to say it.”

“We attached red at the end of it, and it was just the vibrancy and color, the contrast and energy that’s in all the work that we’re bringing to Dime Store Red,” says Kesling.

Dime Store Red is a three-room installation set up in the back of Smoke Cartel’s warehouse on the westside. The building is designed to look like a dime store and is set in the back of the warehouse as a subversion to the typical art-viewing experience.

“We wanted to position it the furthest point away from the door to cut down on gratification,” explains Kesling. “When you walk into any kind of store or gallery, you immediately expect to see art hung up on the walls.”

Each room of Dime Store Red has a specific purpose. In the first room, Lupacchino paints her signature pattern, the Julu pattern, as a nod to the beginning of the partnership with Kesling.

“This room is the pinnacle of our collaboration,” explains Lupacchino. “Will and I started working together in February. I don’t really know how it happened, it just did, like, ‘I’ll paint on your photos.’ We did a whole series of that, and it was a test. We work really well together, we bounce ideas off each other, so we were like, ‘Let’s do something more.’ We like doing pieces that fit in a gallery, but we’re both passionate about really large-scale, like big, crazy, moonshot kind of things.”

Don't be a sheep. Photo by Geoff L. Johnson.

The Julu pattern, she notes, has become a verb, which comes to life in this room.

“‘What can you Julu? You should Julu a car,’” she shares. Ta-da: The Julu room has a Julu-ed car, thanks to their builder, Ryan Lawrence from the Stables.

“We gave him all these crazy things, like, ‘Can you make a car go through the building?’” Lupacchino shares. “And he was like, ‘Um, sure!’”

The middle room serves as a palate cleanser before the intense “do not be a sheep” room.

“This is probably the most important part of our collaboration and how we got to where we are,” says Lupacchino. “The idea behind this is, don’t conform to what everyone’s doing. Make your own stuff, do whatever it is you’re called to do, and don’t conform. I think it’s the passion behind our project—we feel like no one’s doing this in Savannah.”

The development of ideas like these for Dime Store Red was no small feat. Lupacchino and Kesling held five-hour meetings every week to talk concepts.

“We’ve talked about anything you can imagine about this whole space, because we’ve been living and breathing it,” says Kesling. “We didn’t do the whole thing of, ‘Let’s create something super concept-heavy, driven by the idea of the political system or justice in society or something. It wasn’t about having this heavy concept behind it. Every room leads into each other and speaks to our artistic approach. For some people, it’ll be a visual experience; for others, they’ll come through and sit in this room for 15 to 20 minutes and take it all in.”

“I think it’s important that we designed so much of this show and that we both like to have control of a lot of things,” adds Lupacchino. “Every detail is intentionally pulled.”

Dime Store Red also invites other artists to collaborate, like Tayler Ayers, whose art is popular on Instagram and around town. “From the standpoint of Tayler’s work and how it’s word-based, so much emphasis in everything he’s saying and sometimes causes turmoil or a type of energy people feel,” says Kesling. “A lot of times, his work is on a façade of a building, but he was talking about a building he put his work on and the owners of the building were super protective of his work. It might have looked like he tagged it or it was street art not supposed to be there. It’s interesting how much the owner of the building really wanted his work there. We’re allowing him to tag the back of a dime store, leaning on him to tell his story through artwork.”

Kesling and Lupacchino gave artists a fortune cookie with prompts designed to influence, rather than dictate, the contribution.

“I think it’s important that we designed so much of this show and that we both like to have control of a lot of things,” says Lupacchino. “Every detail is intentionally pulled, like this fortune cookie and sending it to people and we have literally no idea what it says: letting go of control and knowing and then letting it be on its own.”

When Dime Store Red opens on Nov. 14, the full vision will finally be on view. Kesling and Lupacchino hopes it inspires its viewers to let go and try something new, just like they did.

“Brainstorming creatively and having weird ideas and doing weird photo shoots where you paint sushi, when you let your mind go and have ideas to bounce around and feel like you can say whatever you want, I think running with that is such a gift,” says Lupacchino.

“This is the weirdest shit I’ve ever done,” laughs Kesling.

“I don’t want to make something and it just stands still,” adds Lupacchino. “We want people to be inspired to do stuff.”