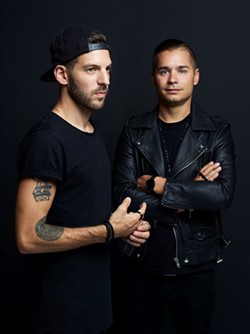 FRENCH DJs/producers Charly Barranger, Julien Corrales, and Julien Lignon have been pushing the genre of bass music since their 2008 debut. After hitting the charts with the single "French Fuck" and remixing tracks by Skrillex, Marilyn Manson, Crystal Method, Linkin Park, and more, the group released a debut album, Irreverence, through Dim Mak Records. With their own backgrounds in the heavy metal scene and the influence of drum and bass, heavy bass house, and dubstep, Dirtyphonics takes pride in defying genre and breaking all the rules of EDM.