At the SCAD Record Fair, a new generation gets hip to vinyl 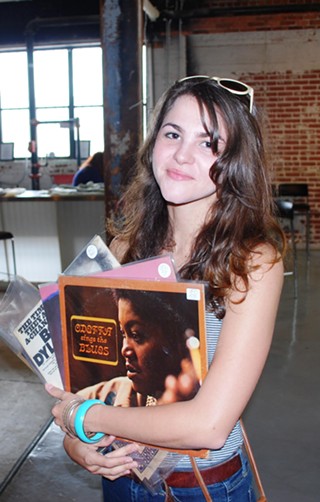 The 2011 Savannah Record Fair was fraught with pleasant surprises, from Odetta to Dylan.

Vinyl, once thought to be as extinct as the passenger pigeon, is making a surprise comeback. According to Nielsen's SoundScan, vinyl record sales have increased significantly over the past four years. In 2009, 2.5 million albums were sold in this country, up from 1.88 million in 2008.

Back in 2001, when the CD reigned supreme, the numbers for vinyl barely registered at all.

At last weekend's third Savannah Record Fair, hundreds of young people - college students, from all appearances, kids who probably weren't even born when those 12-inch slabs of plastic were already starting to disappear from retail racks - combed through boxes and boxes of vintage vinyl LPs. There were very few CDs for sale.

Some came with definite ideas about what they wanted to buy. Others were just enjoying a good browse.

"The biggest thing with the Internet is that the new collectors don't have an appreciation of things like the art and the liner notes," says Florida-based Tom Buby, who's been dealing in used and rare music, and working record shows, since 1978.

"That's kind of too bad, because one of the things that was most fun was seeing who played on what songs, and with who ... that's gone away. Right now, all they have is a Sharpie pen to write down the song listings."

In Savannah, Buby sold mostly inexpensive records. However, he said, "If there's something they really want, I've seen them pull out 25 or 30 dollar pieces. A 40 dollar piece, for a college kid, I think that's pretty good."

Roger Hoppe, a Detroit-area broadcaster who's been dealing records for about 25 years, said the Savannah crowd was buying imports, and specialty things like picture discs. Most of his customers, he explained, seemed to know what they were looking for.

"I met a young lady at the last Savannah show, and she spent about three hours at my table, talking about music," he said. "She was a SCAD student, and she was incredibly knowledgeable. She bought a Kinks box set, and it just blew my mind how much this girl knew about music.

"I was kinda hoping she'd show up here today, because she actually pointed out some rare items that I had, that I wasn't really aware were that rare. A lot of these college students from this generation are - probably because of the Internet - very musically educated."

Then there are the other repeat customers: "Over the years, I've gotten the reputation of being the ‘80s guy," he laughed. "I took a lot of flak at first from the ‘oldies' dealers, but now it's turned the corner. I've got a lot of moms and dads, soccer moms who want their Rick Springfield and Bryan Adams records."

The first day of the weekend event happened to fall on Record Store Day, a loosely-organized national salute to the (dwindling) number of independent record stores. Many labels, in the past few years, have begun re-pressing older titles for the new generation of vinyl buyers. For Record Store Day, numerous artists and labels put out limited-edition singles and albums, in commemoration.

Mark Vaquer ran Graveyard, a Savannah record store, for 14 years. He closed the place in 2001.

"Back then, people were thinking ‘Oh, vinyl's on the way out and it's never gonna come back,'" Vaquer said. "Then Napster hit, and the era of the really cheap CD burner started. And that equaled: Kids were not buying CDs any more.

"That's pretty much what killed my store.

"Back then, there were five or six stores in town. Now, there's nothing."

The resurgence of interest in vinyl, Vaquer believes, is multi-generational.

"People see that Mom and Dad have those old albums. ‘What's that?' ‘It's a record.' It looks cool, you put it on a turntable, it sounds better. It sounds better than CDs.

"You put an album on a good turntable, good tube amp, nice speakers, there's nothing better."