Dive back in with American Aquarium

SAVANNAH'S beloved American Aquarium is back to electrify the Jinx stage with hooky, boundary-pushing Americana/country. The band released its most recent LP, Wolves, over a year ago to roaring success—and while they've enjoyed a growing fan base and critical acclaim, the hype hasn't slowed the busy group down one bit. After logging hundreds and hundreds of shows and countless miles on the road over 2015 and 2016, they're set to release a second live album, recorded at Atlanta's Terminal West, in November.

Frontman B.J. Barham, who’s juggled a solo career with American Aquarium for a while now, will put out a solo effort, Rockingham, on August 19. We chatted about writing for two new records at once, coming back to Savannah, and bringing the American Aquarium live experience to living rooms nationwide.

You have a solo recording coming out this summer. How do you approach your solo work and American Aquarium?

It's just like I've got two jobs. American Aquarium is still my primary focus—this is getting me a better outlet as an artist. I'm writing the type of songs I don't get to write with American Aquarium. The solo project lets me be more of a fictional character songwriter, I get to tell stories, and it's more Americana. It's something I always wanted to do, and it's found its way into American Aquarium stuff, but now I have an entire record to do that by myself. 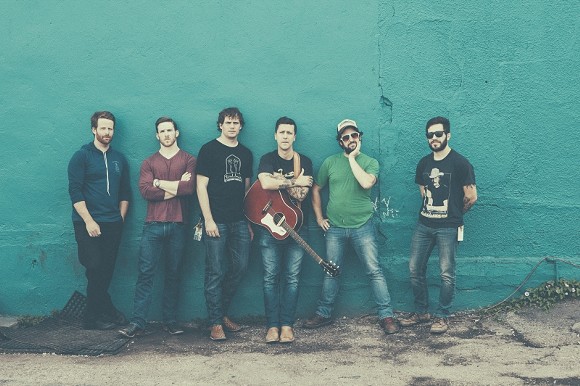 Y'all are still touring on Wolves; what's coming up next for the band?

We had Wolves come out a year and a half ago, in February 2015. We got a live record from Atlanta coming out in November, and in fall we go back into the studio. The last live record we made was in 2011, so the band has grown quite a bit since then—musically and just the size of the band. We had a really big show last November at Terminal West in Atlanta and we recorded it. We're putting it out as a DVD/CD combo.

What made you choose that particular show for the live recording?

Atlanta's always been a really good place for us, a great market. They latch on to what we do. The last live album was live from Raleigh, our hometown, so we were going out for this one, and people came from all over country to scream as loud as they could and try to be on the record!

A live record is a good transition between studio albums. What distinguishes a live record from a studio LP for you?

We're very much a live band—it's how we operate. We have cut our chops on the road. We play somewhere between 250 and 300 shows a year, so we're a live band first and foremost. You come see us live, we try to make it an experience.

When you're recording in a studio, you're going for the perfection, this perfect product, and live, you can cut loose and there's character, there's mistakes, the songs are loose, you can relate to the audience. It's a totally different gig, and something I really enjoy doing. To capture a really great night onstage forever is a really great thing.

Having played those songs for more than a year now, what do you feel the band has learned since Wolves was released?

We've pushed ourselves to be better musicians, and it's pushed me to write better songs. The ultimate goal is to write songs that aren't cliché, run-in-the-ground and come up with original ideas. I always try to push myself to do that, and the band's trying to do that on musical side. We want to prove you can be an Americana/country-rock band and still do some pretty weird things. Burn. Flicker. Die. started that. We want to prove every song doesn't have to be same for you to be a country band—you can get out and explore sonic territory.

What's it like when American Aquarium goes in to record? Do you write ahead of time or do a lot of it in the studio?

I do lot of writing before. Basically, the way we make songs, I write the songs and bring these very, very loose musical sketches to the band and we add on it, and we take away from it, we add more. It's a really democratic process—and there's six of us, so we try to keep adding to, whittling something away, so all six of us can stand behind it and say, 'You know what? I like it.' That's the only way you're going to want to play these songs a thousand times.

Does working on solo material refresh you to write for American Aquarium?

It's a really great feeling to step out and do something on your own, step out and take that chance. The boys have been together for almost 11 years. That's my sanctuary. We know exactly what each other's going to do...I know if I can't figure out this one part, there's someone in the band who's going to be able to do it.

The solo record was definitely an exercise in independence. If I got stuck, well, I better figure out a way to fix it! That was really nice. It’s the same way a kid, at 18, leaves the house for college. He’s going to make a bunch of fuck-ups, but he’s about to do it on his own. That’s what I’m doing here.

Savannah has always been more than kind to us, always been one of those places. The Jinx is a magical, magical place—Susanne and Gil, all those crazy kids, they made up a perfect place. It’s a place we can always go and feel home.

Speaking of American Aquarium , The Jinx