Football players' concussions and chronic traumatic encephalopathy have been in the news a lot. Do woodpeckers, banging their beaks against trees, sustain such brain trauma? How about bighorn sheep?—Nancy 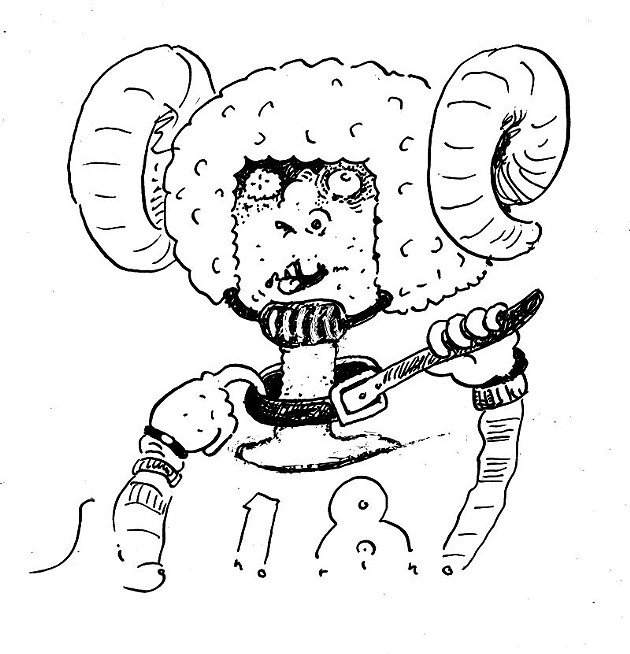 It’s true there’s a serious need to address CTE, a punishing degenerative brain disease that looks to be endemic among former pro football players, and may be a cause for worry in soccer and hockey as well. So one might wonder about species that engage in regular headbanging and seem no worse for wear.

Woodpeckers show a number of anatomical adaptations that help distribute the energy of repeated high-intensity impact. But from a sports-medicine perspective their big innovation may turn out to involve their tongue.

Don’t feel bad if you didn’t see that one coming. The tongue is a little-celebrated element in the woodpecker’s MO—one birdwatching website calls its surprising length “one of the best-kept secrets of birdlore”—and the anti-concussive properties of woodpecker tongue mechanics have only recently attracted attention.

As you’re aware, the woodpecker makes its living by pounding its chisel-like beak into trees (20 times a second, maybe 12,000 reps a day), then extracting whatever chow is thus exposed. This is where the extra-long tongue comes in, variously adapted depending on the species to probe deep crevices in the wood.

Now, if you’re a bird with a tongue several times the length of your bill, where’s it supposed to go when you’re not using it? All vertebrates have an arrangement of bone and cartilage below the upper jaw to support the tongue, called the hyoid apparatus. With woodpeckers, a notably elaborate hyoid setup lets the tongue retract behind and up over the top of the skull, in some species all the way to the bird’s nostrils. At rest, a woodpecker’s tongue is basically wrapped around its cranium.

And seemingly this protects its brain as it hammers away. Much credit goes to the strong, flexible material making up the hyoid apparatus, allowing the whole thing to act as a kind of combination shock absorber and seat belt.

But, and crucially, the muscle called the omohyoid also gently constricts the jugular vein while the woodpecker feeds. This reduces outflow of blood, causing blood vessels surrounding it to expand and create what sports-medicine researcher Gregory Myer calls the “Bubble Wrap effect.”

Bighorn sheep, known for their head-butting, may achieve the same result via different means. Hollow cores in their horns are connected to their respiratory tract, which, Myer thinks, enables them to send already-breathed air back through the system a second time. The higher CO2 content of the recycled air would cause their oxygen-hungry brain to retain more blood, again producing inflated vessels and added cushioning.

In contact sports, extra brain cushioning is what we need. Our skull doesn’t snugly encase the brain—that would transfer too much impact shock to its contents. Instead the brain sits suspended in fluid, which provides enough shock buffering for everyday use, but violent jolts cause it to smack against the inside of the skull. Called “brain slosh” by concussion experts, this is the phenomenon that, repeated over time, leads to CTE.

That’s not something even high-quality helmets can prevent; as Myer points out, the brain’s already got a helmet—the skull. Additional armoring protects against fracture, but does little more.

If we could bump up the blood level in athletes’ brains, though, and tighten their cranial fit, maybe they’d get the bubble-wrap benefit too. But assuming the premise is right, how can football players get more blood into the cranial vasculature?

Moving to higher altitude might help: the oxygen-poor environment leads the body to compensate with increased blood flow to the brain. Myer found that NFL games held in stadiums at 644 feet above sea level and up showed 30 percent less “total concussion incidence.”

We can’t play all our football in Denver, though. So what then?

Maybe just stop playing football? Don’t be ridiculous, America bellows. OK, then it might be time to put the players in a very gentle chokehold. One device now under FDA review is called the Q-Collar: it applies a bit of woodpecker-hyoid-style pressure to the jugular vein, increasing blood volume in the brain by a teaspoon—no more than what happens when you yawn, bloodwise, but ideally providing enough cushioning to reduce injury.

The collar has shown early promise, though there are concerns about any solution involving chronic vein compression, which can lead to clotting.

If it pans out, though, we may have a rare case where a swollen head is an asset rather than a liability.