Taming of the Shrew, presented by Savannah Shakes 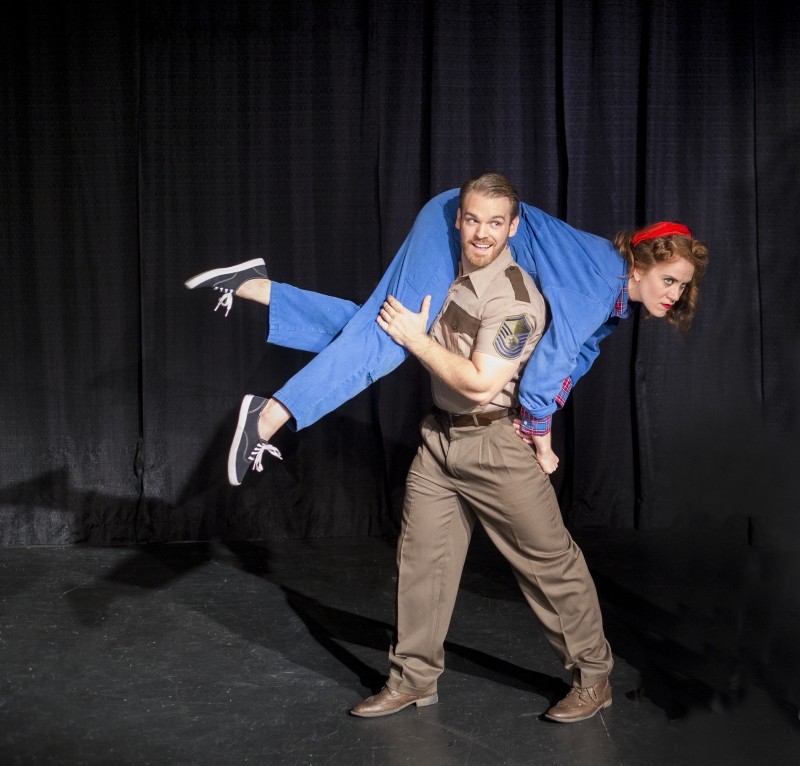 ONE OF the beauties of the work of William Shakespeare is its enormous adaptability. Productions of his plays have been set in virtually every time period imaginable—past, present and future.

And because of his matchless insight into the universality of human nature, it nearly always works.

Savannah Shakes’ inaugural production, The Taming of the Shrew, sets the Bard’s famous “battle of the sexes” comedy about Kate and Petruchio—easily one of his most accessible works—right after World War II.

The fightin’ boys have come home and there’s the little matter of what to do with all those womenfolk who entered the workforce during the war.

“When I first thought about doing Taming of the Shrew I always wanted Kate to embody Rosie the Riveter,” says Shrew director and Savannah Shakes co-founder Sheila Lynne.

“These women heard the call and went to work in the factories, helped keep the country running. And then the soldiers came home and said, OK back in the kitchen, bye bye!” Lynne says.

“There had to be some of them who were like, oh no, that’s not gonna happen, I liked what I was doing, don’t make me go back.”

Deanna Greif, who plays Kate, says “Shakespeare is timeless. It’s easy to suit his words to any time period. He wrote about the same kinds of things we feel and go through today.”

Prior to rehearsals, Lynne and co-founder/co-producer/actor Chris Soucy gave the cast a quick tutorial about the time period of the production.

“We had a little bit of a presentation at beginning on the history, but for my character it’s mostly about the look and feel,” says Greif. “It’s kind of a vibe she has to have.”

As the play begins, director Lynne says, “Nobody wants Kate. She’s not the typical soft feminine girl men of the time pine after.”

Kate’s love interest/foil, Petruchio, in this production is a returning U.S. bomber pilot.

“He’s seen the war, he’s experienced damage from the war, but still likes that dangerous life,” says Lynne. “He still wants challenges. So he’s like, Kate sounds like my kind of gal. As for Kate, she’s surprised he’s not as easily dismissed as the others have been.”

In a neat touch, many of the male characters are members of Petruchio’s former aircrew.

“He’s still in touch with his crew, so a lot of the play’s secondary characters are part of his crew from the war. They’re his bros, his buds, but they’re befuddled by his sudden change of behavior when he starts showing off to impress Kate,” Lynn says.

“There’s a universal personality to men whatever time they’re in,” Burke says. “When you the read the text it very much translates to any soldier in any time. The language is different, the costumes are different. But the way we joke translates to right now.”

Lynne also says that setting the show right after WWII “gave us a framework by which to interpret Shakespeare’s jokes. There are a lot of sex jokes in the show!”

Soucy concurs with a laugh.

“They’re not very subtle. These are single entendres!” he says.

“If you look at the censorship of the ‘40s, there was a lot of overt sexuality going on that was being quelled, whether it’s Bugs Bunny cross-dressing and sexing it up with Elmer Fudd or whatever.”

That said, the proto-feminist message of Taming of the Shrew isn’t lost on this cast.

“I’m a bit of a feminist myself so I try to steer away from anything that puts up a red flag,” says Burke. “I trust Sheila and I trust my fellow actors to tell me if we’re going too far. We want to ride the line of showing the battle of the sexes without being disrespectful. As long as the main theme is creating a partnership in a relationship instead of dominating, that’s the key.”

“That’s the place we approach it from. You can’t have a winner in a relationship,” says Greif.’

“We came from the perspective of Kate and Petruchio being alpha personalities. And she wants to be in charge and he kind of wants to show her that neither one can be in charge.”

However, as Connect reported a few months ago when auditions for Shrew were announced, this is no typical repurposed Shakespeare.

Taming of the Shrew is the inaugural play in an ambitious chronological three-year Shakespeare cycle from Savannah Shakes, beginning in the years immediately post-World War II and moving all the way up to the present day.

“For example, we’re doing Hamlet set in the Beatnik ‘50s, Much Ado About Nothing in the Madmen-era ‘60s, and Henry V during Vietnam,” says Lynne.

The plan is to alternate comedies like Shrew in the summer, with bigger productions of tragedies in the fall.

Soucy, a two-decade local theatre veteran, says another goal of the company is to spur a rebirth in the community Shakespeare spirit, such as Savannah experienced during the days of City Lights Theatre under the direction of Jim Holt and Jody Chapin.

“Every year we’d hold auditions for Shakespeare in the Park, and tons of people who weren’t normally a part of the theatre scene showed up on the doorstep wanting to contribute their talents,” recalls Soucy.

“The very thing we were hoping to achieve with Savannah Shakes was bringing people together to marvel at the work of Shakespeare, and have this great sense of community about the show. And it worked like a charm,” he says.

Lynne adds, “And Shrew was a great place to start. It’s fun!”