Screening at Sentient Bean is Friday

THE RATTLE of a spray paint can sends a metallic echo off of a shadowed street. A familiar hiss emits as a dark-hooded artist sweeps color across a wall. The beat drops.

With that, we’re welcomed into the world of Las Calles Hablan (“Streets Speak,” translated), a fascinating peek into Barcelona’s street art scene. Featuring the work of over 20 artists, the documentary profiles the art and tight-knit community that exists in Spain’s underground world.

The film moves with a passionate fervor as we watch the artists work—the camera follows closely, moving jarringly at times while an array of Barcelonans hurriedly wheat paste, paint, and disappear into the night.

It’s enough to make you want to hop in a plane and set off to find the Technicolor world just feet away from Gaudi’s basilica and the Museu Picasso.

Street art broke out of Barcelona’s totalitarian state in 1970s,at the end of Francisco Franco’s dictatorship. In the 1980s, Parisian street art influences trickled in; in the 1990s, it was all about New York City’s graffiti scene, MTV, and hip-hop culture.

Artist El Xupet Negre says that the “golden era” took place in the early 2000s, when Barcelona was the mecca of graffiti. Artists could freely paint without asking for permission—the canvas only had to be abandoned.

Los Calles Hablan offers something for longtime fans of street art and newbies as well. Artists working in a variety of styles demonstrate their craft, provide a historical context, and share their stories of why many up-and-coming artists find street art to be the most direct way to reach an audience and challenge corporate and political framework.

It’s also a glimpse into a subculture fighting against a restrictive government to spread color, promote dialogue, and have street art seen as a cultural asset to the city and tourism.

In addition to sharing their work many artists (some with pixelated or shadowed faces, for anonymity), had insightful words into the importance of accessible art. 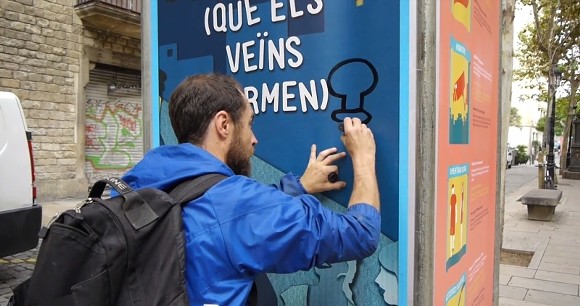 Gola’s passion for creation is tangible in his interview. “It accompanies you like a little demon that talks to you,” he explains. “You can pretend not to hear it, or you can face up to what it says. This is what inspirations is for me.”

El Xupet Negre sees street art as a way to counteract the forces of corporate propaganda. “...everything is publicity, and we are bombarded with messages from all angles so that you can buy and consume and do what they want. Well, the artist sees all that as a way to display his art,” he says.

Zosen is particularly interested in people’s varying definitions of art and the question of what inherently makes art just that. “You have to educate people—most of them, at least—in questions of art,” he poses thoughtfully.

Vinz has a decidedly romantic and communal view of art’s contribution. 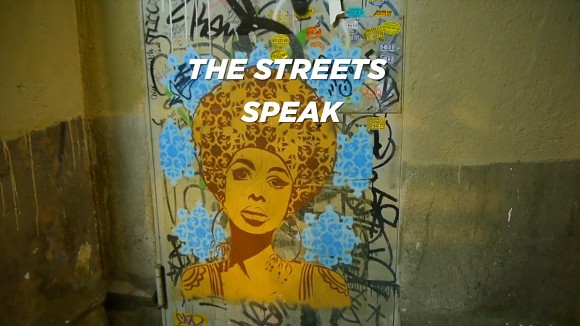 “I think that the function that this has is to keep you company, so that we can walk and see that we are not alone,” he poses.

“When you go for a walk, and you see a work by a great artist, you see that he has the same insecurities as you, the same sensitivity. He looks for the same things. That is what street art can do.”