Does the Rothschild family control every central bank in the world?

I HAD a friend recently try to explain to me that the Rothschild family secretly own almost every central bank in the world and use their power to influence world events. I know the Bank of England, for instance, was nationalized after World War II, so this sounds to me like another crackpot conspiracy theory. What’s the Straight Dope? —Jim Moore 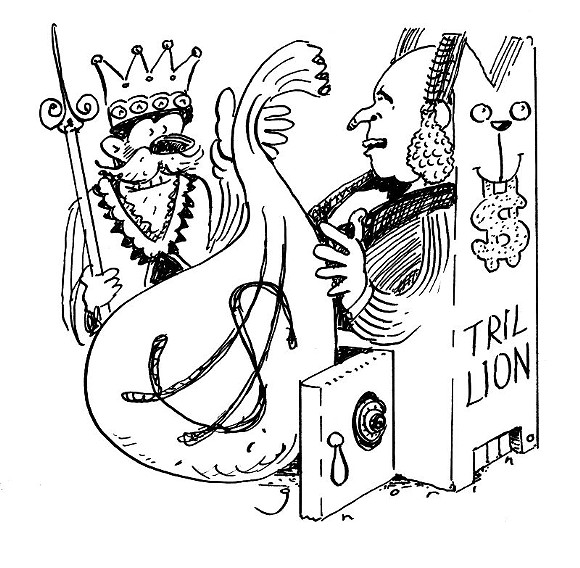 A TEXTBOOK crackpot theory, sure, but with a dash of anti-Semitism to liven things up: what your friend has seized on is basically the ur-myth of the whole Jews-control-banking routine. And it’s far from the only slander that’s been heaped upon the house of Rothschild.

They’ve also been linked to that missing Malaysian airliner, the 9/11 attacks, and the sinking of the Titanic—the premise here being that its passengers included Benjamin Guggenheim, Isidor Straus, and John Jacob Astor, three rich guys who opposed the creation of the Federal Reserve and therefore (it’s important not to think too hard on this one) stood in the Rothschilds’ path to world economic domination.

I’ll allow there’s a certain romance associated with the barons Rothschild, who have been nearby for a lot of significant historic events; a familial tendency toward secrecy has perhaps enhanced the mystique. The family business got going in the late 1700s in Frankfurt, where one Mayer Amschel Rothschild progressed from dealing coins and antiques to providing financial services for local powerbrokers, most notably Crown Prince Wilhelm of Hesse-Kassel.

In short order Mayer dispatched his sons to the great cities of Europe—London, Paris, Vienna, Naples—where they set up shop. This being a time of some political upheaval, the Rothschilds found great success lending money to the various governments of Europe, who needed the bread to fund their unending wars with one another.

Which brings us to one pernicious myth about the family: that they made their fortunes speculating on the outcome of the Battle of Waterloo in 1815. The story, which circulated Europe in an 1846 pamphlet, went that Nathan Rothschild, the son stationed in London, observed the battle’s outcome and rushed back to England to exploit this knowledge on the stock exchange a full 24 hours before news of Napoleon’s defeat reached the British government. It’s a good yarn if you’re trying to paint a picture of an amoral, calculating greedhead, and it made its way into literature and film. Alas: it’s not true. Nathan wasn’t at Waterloo, and he didn’t clean up in the market immediately following. Still, we’d be remiss not to acknowledge that while the Rothschilds weren’t running around Europe acting like anti-Semitic stereotypes made flesh, their burgeoning wealth and influence was no tall tale—that the family actually did provide key funds to the British army and allies in 1814-’15 indicates its ascendant role in European geopolitics at the time. So, I suppose, does another conspiracist claim wherein Nathan financed both sides at Waterloo, coolly playing one off the other.

A further bit of Rothschild apocrypha you may come across is a juicy quote also attributed to Nathan: “I care not what puppet is placed upon the throne of England. . . . The man who controls Britain’s money supply controls the British Empire, and I control the British money supply.” This line appears in none of the major books on the family, and where it does turn up—the most credible venue being a 2004 article in the British journal the Independent—I haven’t yet found it linked to any actual citation. Still, it packs a punch, huh? Exactly the sort of thing you’d expect from a key player in the international Jewish conspiracy.

As to the notion of the Rothschilds owning the central banks, the Anti-Defamation League points out that this Jewish-control-of-the-Fed stuff is pretty much the oldest anti-Semitic story in the book, but one that our modern age of economic anxiety has brought back to the surface—the fact that the international banking system actually is a byzantine mystery that seems to function mostly to make rich jerks richer makes it easy for some to see the nefarious hand of conspiracy behind it. The ADL cites, specifically, the Rothschilds: “In the literature of bigots, the name Rothschild is a trigger for the most explosive of anti-Semitic tremors,” both among your neo-Nazi types and your more extreme Nation of Islam types. Nice to see these guys agree on something.

Where are the Rothschilds today? Now in its seventh generation, their European banking business remains intact. By design, nobody really knows how much the family is worth. As the Financial Times has put it, “The family empire is divided among a web of descendants and a few external shareholders. The ownership structure is opaque, which makes it hard to estimate the family wealth, although it is one of the richest in the world.” That 2004 Independent piece cites “industry insiders” estimating the Rothschild kitty as countable “not in billions but in trillions.” So basically the family continues to do what it’s always done best, which is to make money hand over fist, and that’s probably the long and short of it. Greed’s a pretty ecumenical value.

More »
More The Straight Dope »
All Extras »
Comments (36)
Add a comment
Subscribe to this thread:
By Email