Dog Reiki and other acts of faith

PLANNING for a big trip always triggers my crazy.

I make endless to-do lists, only to misplace them until there’s a rainbow of Post-It notes all over the house.

I start packing weeks before, obsessing over whether I really need the sandals or if the black flats will match everything. I clean with hysterical precision so that upon my return, opening the door is like popping the seal off a new can of chips.

In between printing out my itinerary four times (one for the neighbors and one for each pocket of my crossbody travel purse) and arranging eyedroppers of water in the plants, I deal with the stress of impending departure by chewing on my nails and bingeing on gluten. (A Squad Bake Shop’s blueberry basil donuts at Paris Market really seem to help.)

Yet even with my raggedly cuticles and powdered sugar mustache, I’m practically the poster guru for Serenity Now compared to the dog. 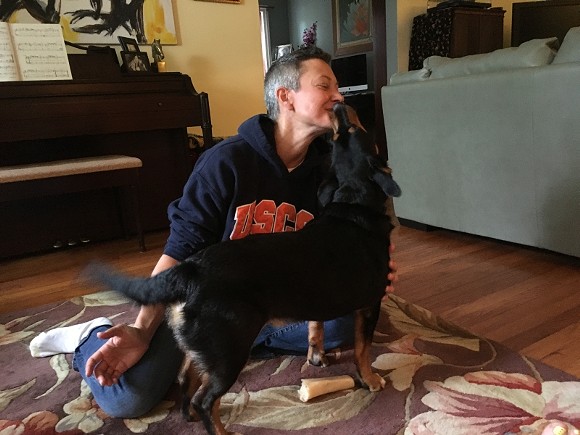 No live bones were harmed during Sue Finke’s Reiki session with the orally-fixated Geechee.

Our rescue pooch Geechee has come a long way since being found by Paul Rockwell behind a trashcan on Christmas Day 2014. He has fully recovered from his brush with the front bumper of a Ford Explorer and subsequent runaway adventure last fall. But the presence of the Brown Suitcase of Abandonment next to the closet seems to have activated a major case of canine cray-cray.

In addition to his usual tics of eating bathmats and barking maniacally every time someone sneezes, Geech has ratcheted up the neurotic behavior. He must have a bone in his mouth at all times, lest he orally fixate on someone’s arm. He scratches compulsively, even after we switched him over to the allergen-free food from Tailsspin.

And every time I place something in the brown suitcase, he whimpers, as if with each rolled-up pair of jeans he is a step closer to a stint in a Revlon research cage instead of spending a fortnight frolicking with friends at Carol’s Pampered Pets.

Also, after burying his third bone of the day in my flower garden, the little loon snuck up on one of our two remaining menopausal chickens and literally, shook the shit out of it. We buried it next to the pug in our ever-expanding pet cemetery while he spent three days under the bed in a shame spiral. But dog memory is short, and the following week, the Henslayer snuffed the last one, too.

To be fair, them chickles were old and slow, and hunting instinct is a powerful thing. Not to be macabre, he probably saved us from what we’d have had to do ourselves soon enough.

After hearing me kvetch about Geech’s travails, our friend Sue Finkle offered to give him a Reiki treatment. A beloved yogi on staff at Savannah Power Yoga, Sue has been practicing the Japanese form of spiritual healing since 2004 and knows a helluva lot more about serenity than I ever will, so I handed over his shredded leash.

Characterized by a “laying of hands” that is hardly a touch at all, Reiki brings the physical and mental realms into balance by channeling qi, or “universal life force energy,” from practitioner to client, explained Sue.

While it’s increasingly used as a complementary treatment for cancer and other diseases, she clarifies that Reiki is not meant to replace traditional medical or veterinary care. Call it hippie voodoo if you want, but thousands across the world practice it as a way to promote well-being and inner peace.

“My goal isn’t to convince people that it works. I’m just here to serve,” she shrugged as Geech gave her the side eye then sneaked off to grind his back teeth on the piano leg.

Sue became a Level 3 Reiki master working on humans and began experimenting with the non-invasive technique on animals while working at the Skidaway Institute of Oceanography (yeah, the yogini also has a Masters in Marine Biology, no big deal.)

“Every animal has a life force, even if they don’t have the egos we humans do,” she said, ticking off a list of creatures she’s worked with, which includes not only domesticated pets but fish, an octopus, a bat, and, in the case of a nighttime invader who found his way in through the cat door, a possum.

The aquarium is also where she met One Love Animal Rescue’s Kerri Bulski, who was delighted when Sue offered her services to the organization. Sue now performs Reiki treatments on many of One Love’s rescued pets, offsetting the cost by raising donations and seeking sponsors via her website, breathe2balance.com.

“I’m a huge believer. Sue has a gift,” says One Love co-founder Dana Bertagnolli, describing case after case of sick pups taken from shelters and breeder mills that have responded to Sue’s gentle work.

“A lot of our dogs and cats come from abusive backgrounds. In order to heal, sometimes it has to start on the inside. Reiki opens your life force to receive positive energy, and that’s what it seems to do for the animals. We consider it an invaluable service to our rescue.”

Even knowing that plenty of rescue pooches dig Reiki, I was skeptical that it could help Geech. I’m all about alternative healing modalities, but I doubted he would sit still for a session with Sue and more concerned that he would demonstrate his maladjustment on her fingers.

Then again, he’s not nearly as scary as a possum, so I figured she could handle him.

I was surprised that after a mere minute of barking backflips and showing off his bone collection, he immediately plopped between her legs with his favorite femur and let her do her thing. Sue held her hands about an inch above his fur for almost an hour while we sat on the living room rug, establishing the connection that she says feels like static electricity. Geech pulverized his bone the entire time, occasionally looking up like, “Yo, this is nice, but when does the massage start?”

From an observational standpoint, it didn’t look like a whole lot was happening. That’s significant in itself, as no live bones were harmed. All I know is that ever since his Reiki, Geech has slept through the night in his dog bed instead of draping himself across the brown suitcase like a four-legged martyr.

So at least one of us is ready for the trip. Me, I’m still stressed to the gills.

But I expect by the time you read this that I’ll be blissed out on donuts and Rescue Remedy on my way out of the country.

If not, Sue promised that Reiki works long distance, too.