I AM fairly new to this dog person business.

I grew up with cats, which my mother insisted were much cleaner, except in the mornings, when they left half-chewed dead birds on the doorstep.

My first dog, Jasmine, came with my husband. A shaggy, smoke-colored Snuffleupagus-type creature that had to be displaced from the horizontal middle third of the bed every night, Jasmine was one of the smartest people I’ve ever known. She never needed a leash, preferring to wait patiently outside the grocery store or the library. She could snarf a sandwich right out of your hand before you even knew she was eyeballing it. When I was in labor with both my kids, she snuggled up back to back with me, pushing her big gray tushy against every contraction.

My second pup was my very own beloved pug, Clarabell. This lump of love had all the intelligence of a rutabaga but taught me the true meaning of devotion, clicking endlessly around the house so she could stare at me with her goggly, cataract-clouded eyes. She loved riding in her special sturdy bike basket right up until a few weeks ago, when she succumbed to her long struggle with diabetes, arthritis and torrid flatulence.

My little Clara passed away next to my side of the bed, teaching me again how being present for death can be beautiful and sacred.

I’m eternally grateful for the many fur-heart condolences offered online and in person. The comforting words were still coming at Sunday’s Doggie Carnival, sponsored by the Humane Society of Greater Savannah, which I'd not attended before because, well, Clara hated other dogs.

Nothing heals the heart like puppy love, and it was a salve to the soul to witness this convention of canine cuteness: Prancing pit bulls, winsome Weimaraners, costumed Chihuahuas, marvelous mutts—every breed, size and color combination imaginable filled Forsyth Park with a joyful cacophony of barks, ruffs, growls, yips, yaps and howls. Our family’s remaining pooch pal, Geech, was beside himself with excitement and peed a little, but that’s totally acceptable in these circles. He also won a snazzy second place ribbon in the Doggie Derby, which he promptly ate. 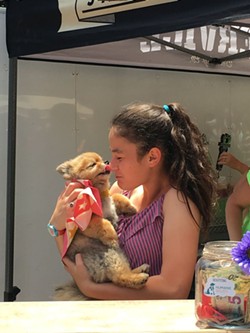 This annual fundraiser—put on almost entirely by volunteers—is the hottest festival on the circuit for the pet set (let’s nickname it Barkaroo? Shaky Tails? Dogchella?) As the doggles amused themselves all afternoon by tangling leashes and sniffing butts, the two-legged folk perused the vendors and played games, including giant Jenga courtesy of the Chromatic Dragon. A couple of tickets bought kisses from Instagram sensation Miss Zoe and a fortune-telling session with Mopper Kelly Realtors’ Great Jodini, who read the “terrier cards” and predicted long, happy dog lives for all.

It is a cold fact—some might consider it a travesty—that a Humane Society event can bring out thousands of people but a recent protest against gun violence was a pedestrian trickle. Earlier in the month, I marched with activist Linda Wilder Bryan and several dozen orange-clad citizens to the county courthouse, and I felt the frustration of unmet campaign promises and dismissive leadership.

“Eddie DeLoach, where is he? City Council members, where are they? I invited all of them here today,” she called through a bullhorn, a mother demanding justice for hers and the 200+ sons whose homicides remain unsolved.

“Everyone ran on the platform about crime, but where are they now?”

Indeed, in a city where the murder rate has doubled in a year and the bloodbath now includes in the body count two mothers, Hannah Brown and Kathy Henry, it might seem painfully deluded and downright ludicrous to parade around a bunch of Pomeranians in tuxedos.

But our adoration for animals does not diminish the grief and outrage we feel for our fellow humans. Empathy for others transcends species, and research shows that the better care we take of our four-legged friends, the better we take care of each other. Sadly, it also goes the other way.

“Intentional cruelty to animals is strongly correlated with other crimes, including violence against people,” reminds Carol Hammock Williamson of Speaking Loudly and Often for Animals, who has spent all kinds of time trying to convince Chief Lumpkin to educate officers on the connection.

Crimes against humanity and animals are inextricably linked: Pet abuse is a major indicator of domestic violence and child abuse, and according to a landmark study, 66 percent of those arrested for crimes against animals (including dogfighting) already had arrest records for battery.

Poverty—which is not a crime, though there are those who’d like to tell you differently—often necessitates pet neglect due to lack of resources. It also contributes to the overpopulation of homeless dogs (and cats!) due to owners not being able to afford to sterilize pets, a problem already being tempered with Pet Fix Savannah, HSGS's new low-cost spay/neuter facility.

“Our animal welfare issues in this community are significantly tied to the well-being of the people,” HSGS Executive Director Michelle Thevenin wrote recently, expressing her wish to partner with local poverty-reduction organizations.

We know that connection and collaboration are the best ways to help each other, and that includes our furry companions. The proceeds reaped from the Doggie Carnival enable HSGS to continue Operation New Hope, the program that pairs dogs with prisoners, training everyone on how to be civil and kind. And Nuzzle Buddies helps kids with their reading skills as they entertain prospective pets waiting for their forever homes.

We know that humans and dogs have evolved together, aiding each other’s survival from the dawn of time. Surely this pup-praisin’ city can find compassion and create solutions for the bipeds in dire need of help, and vice versa.

We don’t just share slurpy love with our dogs, we teach each other how to be better beings. Anyone who has ever been followed into the bathroom by a pair of adoring goggly eyes knows that, too.