Crews work the fluids so fast, like a magician’s card trick.

WHEN I walk around Lake Mayer sometimes, I find myself asking, "What the hell is that noise?"

Every now and then, the tranquility of ducks and sailboats is interrupted by what sounds like bees swarming, along with an auctioneer’s voice, fast and rhythmic:

“Up and over the triple there in the back, playing it smart, doing the single, single, single! Two-thirty now, two-thirty left to go, working the right side of the track now....”

Remote-controlled cars fly over humps and around curves at the 30-year-old Phil Hurd Raceway at Lake Mayer.

I investigated the ruckus. And I’m here to report that its source, one of the nation’s oldest tracks for remote-controlled cars, is celebrating a milestone.

The Phil Hurd Raceway, along with its sponsor, the Savannah-Chatham Off-Road Racing Enthusiasts, or SCORE, is now 30 years old.

Guys – and it’s mostly men and boys – have been gathering around a clay track there since 1987 to race little cars, RC buggies, whatever. Just don’t call them toys!

“You got to work on them all the time,” says Alex Gilmore, 77, who’s been with the group since the start. “You keep the fluids changed in it, like the shocks. You change the springs, pistons, the weight of the oil, all that has to do with the handling of the car.”

These guys are serious. During a recent winter race, a three-day affair which drew about 160 entrants from all over the Southeast, racers arrived with campers and trailers decked out as “car repair shops,” complete with heaters, tools and televisions. 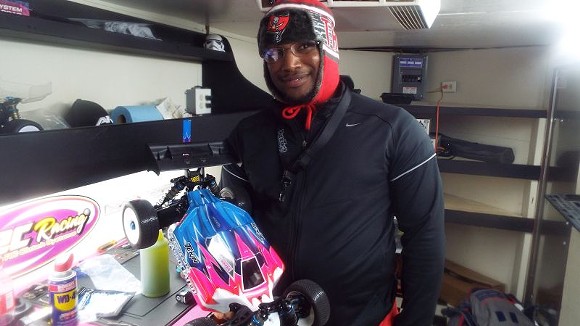 Jermaine Hayes shows off his remote-controlled car and stays warm inside his race trailer.

“Do you see how cold it is out there?” asked Jermaine Hayes, racing a “one-eighth scale” car on the coldest night of the winter so far. “While you guys are out there freezing, I’m just in here chilling, waiting for my turn. I stay warm.”

The gas racers, by the way, operate in teams, just like NASCAR drivers, with a pit crew underneath the viewing platform, waiting for the car to come in for gas during the race.

I stood in the noisy pit with Sean Pressburg, 16, who explained part of the club’s appeal.

“You meet new people and make good friends,” he says. “Some of us aren’t out here necessarily to win. We’re just out here to have a good time.”

You could’ve fooled me in the pit, where crews work the fluids so fast, like a magician’s card trick. Patrick Rossiter was clearly out to compete. He brought his one-eighth scale electric buggy, lithium polymer, four-cell “with brushless technology.”

“You’ve got to be focused, stay in the game and stay relaxed,” he says. “It’s all about precision and endurance.” Rossiter has worked at hobby shops where cars are sold.

Also making a living in remote-controlled cars, Lance McDonald is the booming voice whose auction-like calls, artfully delivered, are heard all over the lake on race days.

But his organizational experience is just one reason racers like him. His calls have “personality.” “You have to tell jokes,” he says. “If you don’t tell jokes, you’ll have a bland program.”

His voice pierces the air when there’s a wreck. Yes, “the agony of defeat” happens from time to time, injuries to car parts only. That’s part of the fun of watching.

I’ll definitely be at their summer race. It’s the only noise I’ll want interrupting my walk.