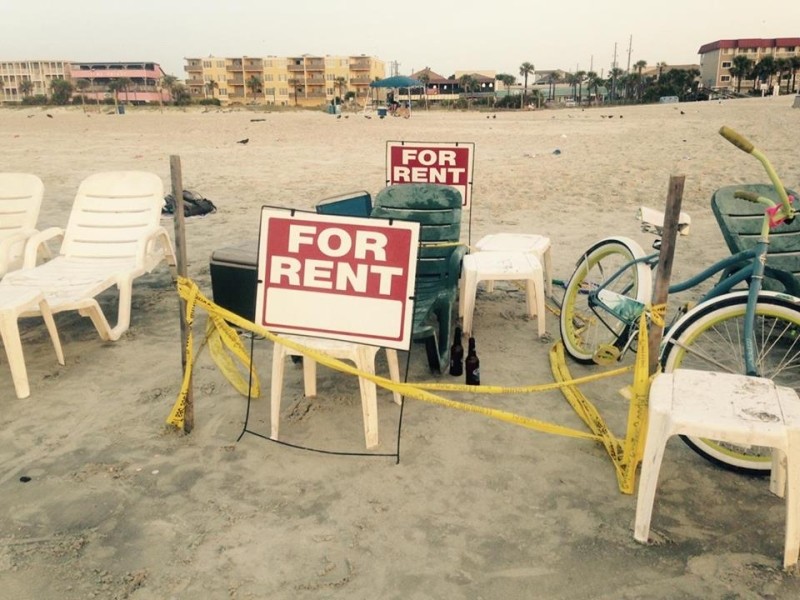 OVER THE Fourth of July weekend, someone disturbed the carefully-marked possible nesting site of a rare leatherback turtle.

Volunteers from the Tybee Sea Turtle Project on Saturday’s dawn patrol found that the site’s wooden stakes had been moved during the night and its yellow caution tape repurposed to cordon off a pile of chairs, coolers and bicycles.

Tampering with a sea turtle nesting site violates federal and state laws. No suspects have been charged, though Tybee Island Police issued citations to two nearby witnesses for leaving debris on the beach.

More than 1,700 sea turtle nests have been identified on the Georgia coast so far this season, including eight on Tybee Island dug out by loggerhead turtles. The vandalized site belongs to a rare leatherback turtle, spotted near the Pier on May 21. Tagged on Wassaw Island in 2011, she is the first leatherback seen on Tybee since 2004.

The gentle giant left a body pit that may or may not contain a nest below it.

“We’re calling it a ‘possible nesting site’ because because they lay so deep,” says Tammy Smith, coordinator of the Tybee Sea Turtle Project.

Leatherbacks are the largest species of sea turtle, reaching up to 2000 pounds and eating their weight in jellyfish every day. The biggest threat to their survival is plastic and poisonous debris in the ocean discarded by humans.

Turtle advocates ask that if you’re looking to plunk your beach gear and encounter yellow tape wrapped around a series of wooden stakes, find another spot. And don’t forget to collect your garbage at the end of the day.

“Picking up all trash and recyclables, removing beach gear, filling holes in the sand, and flattening sand castles are all easy ways to have a direct and positive impact on sea turtle nesting,” urges Cody Shelley of the Tybee Island Marine Science Center.

Shelley also reminds that flashlights can confuse nesting mamas and turtle hatchlings. Night visitors to the beach should use a red filter on flashlights (red taillight tape purchased from an auto parts store works well) or download a turtle-friendly red flashlight app to their smartphones. The science center’s Lights Out! campaign encourages businesses, vacationers, and residents along the beach to turn off exterior lights after 9 p.m. from May through October.

Shelley acknowledges that most people are respectful and many want to help. “The best thing beachgoers can do to support sea turtles on Tybee is to make sure our beaches are safe and welcoming.”

Smith reports that she and volunteers were able to restake the disrupted area using previous coordinates and original materials and that there was no damage to the leatherback site, which may hatch later this month if there are in fact any eggs.