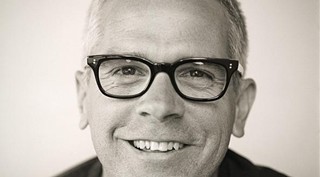 DJ Stout knows a thing or two about design. After spending more than a dozen years as art director for Texas Monthly, including overseeing a handful of national award winning spreads, he landed as a partner with renowned design firm Pentagram and hasn’t looked back since.

Stout stops in Savannah next Thursday for a presentation sponsored by the Creative Seed Initiative, so we caught up with him by phone last week to talk about the relationship between content and design, David Carson as problem solver, and advice for young designers.

With an interest in journalism, what is it that drew you to design instead of writing?

DJ Stout: My dad played baseball in the ‘50s for a semi–pro team in West Texas. After that, he was a sports writer for a local paper there for a while. I think that’s where I got the influence to journalism. In 4th or 5th grade, I’d do these little neighborhood newspapers. At first they were mostly cartoons. I was doing them on carbon paper, so I pressed real hard, I’d get 4 or 5 copies and I’d just go around the neighborhood and pass them out. I was always really interested not just in design, but the combination of text and design.

How does design influence content? Does that impact how the reader perceives the quality of what’s on the page?

Is there something that you look for in a photo that sets it apart? What is it that makes a great photo in your opinion?

DJ Stout: To me it’s a gut reaction. A really great photo, like a really good story, has a clear narrative to it. When you look at that picture, it very simply tells you something. It gives you an emotion or it gives you a story. Some photographs may have some really good content in them, it’s just that they’re not photographed in a way that gives the information quickly or emotionally.

Earlier, you mentioned working with magazines on re–designs. What are some of the most common flaws you end up correcting?

DJ Stout: Because they don’t have the greatest art budget in the world, the designers are trying too hard. They don’t have the budget to assign a really great portrait or illustration, so what they end up with is a lot of crummy photographs that are either provided to them, or party pictures – grip and grin type stuff. So they get on a computer and start to overcompensate for the lack of good art. There’s a lot of trickery. Screen back imagery with type on it. Lots of doo–dads, bars and colors.

The main thing we always talk about is pulling back and simplifying. Thinking about what you’re trying to communicate with each spread. We show them ways to do that with no budget. What it really takes is thought and re–evaluating what it is that you’re doing. Keep the text nice and clean and simple, but create a visual hierarchy. That’s the other problem. When the reader turns to a spread, they don’t know what to look at first because there is no hierarchy.

In the progression of design over the last 60 years or so, going from the late–50s super–clean Swiss style to the early–90s David Carson craziness – is there a canonized concept of what is good and bad design? Or are we just in a clean, minimal phase?

DJ Stout: There’s still a lot of horrible design out there. I can’t believe how much bad design there is actually. I do feel like we’re maybe in part of the cycle that leans toward cleaner, simpler design. Design is a lot like fashion. It goes up and down. In fashion, one year the long skirt is in, and then next year the short skirt is in.

What’s interesting about the whole David Carson thing — I know David pretty well — when he came up with that original look that he was doing for Beach Culture and Ray Gun, that particular look was really smart because he came up with the solution to a problem — the same problem I was telling you about. At Beach Culture he was working at a magazine where he didn’t have a very good art budget, so he was given all these crummy photographs. He was like, well I’m not going to sit here and do bad design, I’m going to sit here and do something with my intelligence and come up with something more interesting. He’d take a photo and crop it in an interesting way. And then he started doing stuff with typography because those were the tools that he had. Because he was trying to solve a problem, what he ended up doing was creating this new look that was copied endlessly by students for years.

What’s some advice that you would give to young designers that you wish someone had told you?

DJ Stout: The most difficult part of my job is communicating to clients, trying to explain to clients who don’t live in a design world why you’re doing something a certain way. I think you can tell students that all day long, but when they are getting out of school, they’re fascinated with design and how things look. Like fashion, they’re just interested in the surface of it.

What you learn over time is how to communicate, and how to sell your ideas to clients. That’s what really separates the men from the boys.

Throwing it back with Ex Hex