Walking and talking with the new director of The Creative Coast

Last week, when I called up new Creative Coast director Bea Wray for an interview, the first thing she asked me is "Can you walk and talk?" I replied that I would be fine if I kept chewing gum out of the equation. Probably.

But even without a stick of Wrigley's I had a hard time keeping up.

It was only her fifth day on the job as the head of Savannah's entrepreneurial nurture nest and innovation think tank, and Bea was already moving at lightning speed.

When I arrived at the airy offices on Wright Square, she'd just gotten off the phone with philanthropist Howard Morrison and had squeezed me in before a lunch meeting with a board member. I was thinking my old Dansko mary janes would serve me well for a leisurely stroll around Tomochichi's Rock when I noticed Bea was wearing cross trainers.

And she intended to use them.

"Let's head towards the park," she suggested, already ten feet ahead of me, blond curls flying behind her.

Recorder in hand, I gamely trotted along, trying to avoid tripping over the cobblestones as I reconciled the impressive person I had read about on paper (Harvard MBA, venture capital darling of Siemens Business Services, successful serial entrepreneur) with the grinning lady in the pink polka dot skirt kvelling about her three kids. Though she may look the part, it became evident after just a few blocks that Bea Wray is much more than a very smart cheerleader for Savannah's creative class. 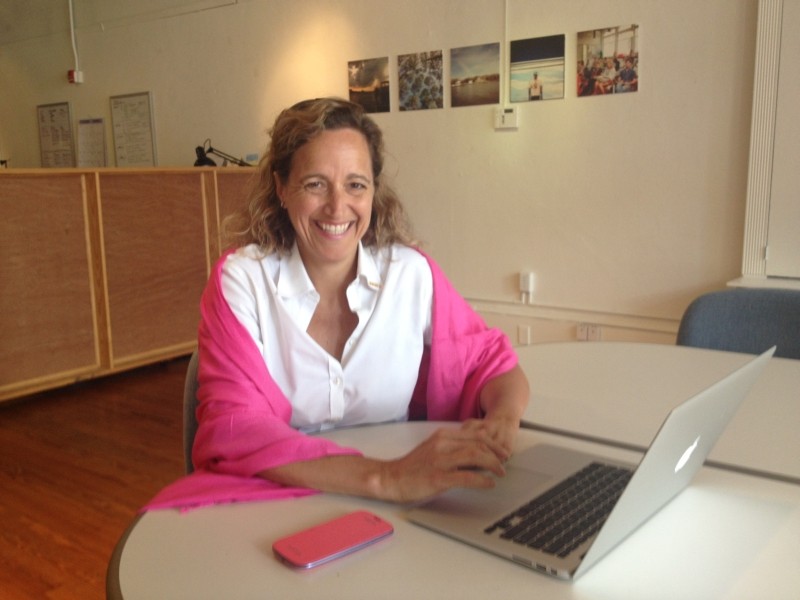 Bea lives on Hilton Head Island, but her Savannah roots run deep: Her grandfather was a deacon at Calvary Baptist Church when the social hall was just a card table and some fold-up chairs. Her other grandmother worked on Broughton Street bringing in container ships. Both her parents attended Savannah High and came up "very poor," and Bea grew up understanding that with this city's gilded charms come great challenges.

"Savannah was a place you escaped from," she once believed.

So she did — to Emory, then Boston, then San Francisco, New York, Munich — until 9/11, when she and husband returned with their new baby to American soil "temporarily." They fell in love with Daufuskie Island, settled into Lowcountry life.

But Bea is not one to be lulled into a stupor, no matter how lovely the scenery. In 2001, she met with then-Creative Coast director Chris Miller, who helped her hatch Source Harbor Inc., a third-party escrow company that protects source codes and intellectual property for those who license software. I'm not exactly sure what that means, but apparently it was a damn good idea.

"I walked in and said 'Hey, can you help me start by business?' And Chris shook his ponytail at me and told me to go for it," Bea remembered as we breezed up Bull Street, the exhaust from the traffic mixing with the lemony scent of magnolias.

"I raised local dollars, built up four offices with clients in 14 different countries. I sold it to an international company, returned everyone their investments, then took off a couple of years to be a mom. That's exactly what I want to help other people do."

Bea and her growing family eventually moved to be with her parents on Hilton Head, and she's kept her tan toes in the entrepreneurial waters with the social media site Kin Valley and a mobile app for ER doctors.

She often catches a ride with other big-brained commuters like ThincSavannah co-founder Tom Shimado and HunterMaclean powerhouse Diana McKenzie.

"When I come across that bridge, it means something to me," she said.

"I have a very joyful life. I'm a very happy person. I like creativity. I also like to be prosperous. I want to help people understand their resources."

Our conversation jumped from socioeconomic strategies to soccer mom sympathies back to Savannah's position in the global economy as we blazed past the Forsyth Park fountain. I mention that as hard as SEDA and other entities work to bring sound business here, we seem to be hanging out in a certain comfort zone. If Savannah really is going to make a push to become the world-class city we believe it can be, we've got to create sustainable jobs for all these college grads.

Bea's key seems to be marrying off some of the starving artistic potential around here to a greater capitalistic vision:

I had to admit to Bea that while I have always been a great admirer of the sexy techy-business network branded by Miller in 2007 and most recently headed by community advocate Jake Hodesh, I wasn't exactly sure what the Creative Coast does.

I mean, I dig the programming like FastPitch (a local, kinder version of Shark Tank) and the inspirational showcase that is TEDx. But say you've got this great idea for a widget or service. What next?

"Well, our mission is to encourage, enhance and build innovative, knowledge-based businesses. But what does that really mean, right?" she asked rhetorically as the buckle of my Danskos rubbed uncomfortably on my ankle.

"We're the glue. We put the suits with the tattoos together with a purpose."

She calls her predecessors' legacies a "launching pad" and means to kick up the reach beyond the Talmadge Bridge. She's still defining her next steps but intends to utilize her extensive network as well tap into the region's undersung assets, like AASU's IT department and the Darla Moore School of Business in South Carolina. The board chose her from 300 applicants, banking that her consulting skills — worth $300 an hour in the big world — will translate into greater opportunities for us all.

Perhaps the expectation of Bea's new era is best described by board member Rad Harrell, the host of this Friday's sold out TEDx event (lucky you if you got your ticket!)

"Chris was the beta; he got it going and defined it. Then there was Jake; he was version 1.0, laying out the market and creating relationships," explains Rad with his signature enthusiasm.

Tell me about it. By the end of my "walk" with her, I had practically melted my soles of my shoes. Judging from her pace, there will be no coasting under Bea's watch — maybe it should be renamed the Creative Sprint? (*Boom* Thanks folks, I'm here every week! Tip your servers!)

She may push Savannah to be and do more, and I have a feeling it will totally be worth the blisters.