Legendary UGA coach to be inducted as Georgia History trustee 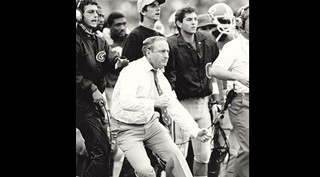 Vince Dooley on the sideline coaching the Georgia Bulldogs

He needs no introduction. But here's something you may not know about the legend that sets him apart from many sports figures: He's a bona fide scholar.

Dooley's abiding love of history and politics, in fact, is almost a parallel, shadow career alongside his iconic status as former University of Georgia football coach and athletic director.

It's a passion that very nearly persuaded him to run for U.S. Senate in 1986 against Mack Mattingly.

A longtime Georgia Historical Society board member, Dooley will be inducted into the Society as a Trustee at this Saturday's gala, along with former U.S. Senator Sam Nunn of Georgia.

His love of football has been passed down to son Derek, now head football coach at the University of Tennessee.

Without further ado, here's our chat with the man who'll always be top Dawg.

Not a lot of people know you have a masters degree in history from Auburn. How did that come about?

Vince Dooley: I actually finished my undergraduate work in business and went in the Marine Corps. I came back and wanted to take advantage of the GI Bill. So I thought I would get a minor in history and then proceed to get my masters in economics.

I took the history courses and I really enjoyed it. It was part time - it had to be because I had a full time job coaching. When I got finished with the history courses, I started to take the economics courses. And I found out that I was making myself study at night, which means I wasn't really enjoying it like I was enjoying history.

I told a professor my dilemma: That it would be an easier and shorter course to get my masters by going the business route, but I really enjoyed the history. But it would take me three times as long because I'd then have to qualify for an undergraduate in history before I even started on the masters.

He said he thought it was important to do what you really enjoy doing. Even though it will take you a much longer route, the chances of eventually getting the masters would be much greater in something you enjoy as opposed to something you don't enjoy.

Vince Dooley: Yeah! It was great advice. It ended up taking me five years of taking courses and about a year and a half to do my masters thesis, which really almost turned into a doctorate because I got so involved in that.

It was on a political figure in Alabama named Tom Heflin, who was a colorful character. They called him Cotton Tom, and he was probably the greatest orator outside of William Jennings Bryan at the time.

With every course there was always a paper involved. What I enjoyed writing about most was elections, so I did most of my work on Southern demagogues. Huey Long, for example, or "Pitchfork Ben" Tillman.

In between, I got one degree with the name of one school, and by the time I got the degree they'd already changed the name. My first degree was from Alabama Polytechnic Institute. Then they changed it to Auburn University. So I've got a degree from each one!

I don't go as far back as when they called it East Alabama Male College. I'd hate to have a degree from there. I'd be 200 years old, maybe (laughs).

It seems like it would be so much more difficult for a head coach to find time to do that today, as grueling as the job has become.

Vince Dooley: The difference is we finished our recruiting in December, and now they're still recruiting in January. It was 24 hours a day, seven days a week during the season, but we had some down time as opposed to now.

Also, in the spring the demands weren't as much as now. I could study at night during spring practice and also be recruiting in the spring.

I couldn't do any of it during the season. I'd take classes in winter and spring, and take a doubled-up summer course before football practice. Once we started football I couldn't do it.

When I would take off and go recruit, I'd find some time to maybe go to the University of Alabama library, where the Heflin papers were. As an assistant coach I was able to find time to squeeze it in, as opposed to a head coach.

You nearly ran for Senate in 1986. Any regrets at all about not taking that path?

I had this desire in my mind, but it was not in my gut or in my heart as it should have been to devote myself to doing that. Because of that, I think I made the right decision.

It's sort of like the decision with the masters degree. You've got to thoroughly enjoy doing what you're doing. And I didn't enjoy the politics part of it as much as I enjoyed athletics and being of service that way.

With the nastiness of politics today, I've got to think you're relieved.

Vince Dooley: It is tough. I think the toughest part is that itself keeps a lot of good people from running. There are a lot of people that are really good people that could be of great service, but they don't want to put themselves through it.

Unlike a lot of GHS Trustees, you actually have a long association with the Society.

Vince Dooley: I'm on the board, but you always get surprised when you're informed that you've been "selected" to receive an honor. You're taken aback, and say why me? But I've never been taken aback as much as by this one. I can think of a lot of people in this state that ought to be honored as a Trustee long before I should be. So I am very much humbled by it.

Then to be in the same breath with Sam Nunn, somebody that I think is a real statesman and not a politician, makes it extra special.

If we had a few more Sam Nunns in politics today, this country would be a much, much better place.

Vince Dooley: That's exactly right, and that's the kind of person I'm talking about. We don't have enough of those.

You're from Alabama but have lived most of your life in Georgia. What sets Georgia apart from other Southern states?

Vince Dooley: It has the quality, the charm, and all the wonderful attributes of the Deep South but it also has this incredible economic engine of Atlanta that drives it. You've got the charm of the Old South and forward-looking Atlanta. That combination makes one extraordinarily unique Southern state.

Let's talk football. What do you think of your fellow Auburn Tiger, Cam Newton?

Vince Dooley: I've never known anyone quite like Cam Newton, probably the best one-year football player I've ever seen. But as great as he was, and as greatly as he influenced that team, they couldn't have done it without that defensive lineman. They couldn't have done it without that running back, who really came into his own in that championship game. You've still got to have a complete team.

Herschel Walker is a great example. Herschel was the missing piece of the puzzle in 1980. He's be the first to tell you he came in with an experienced bunch of seniors, a good offensive line, superstars in Lindsay Scott and Buck Belue and Scott Woerner, an All American safety. So we were a complete team, though Herschel was at the forefront.

Where does Auburn's Bo Jackson fit in?

Vince Dooley: I think Herschel is the best running back that's ever been in college football. I think Bo might have been a little better athlete, but I don't think if you look at the record that Bo over the same period of time was as productive as Herschel.

The compliment to Bo is he was able to play baseball, which really points to his athletic ability. But Herschel had this world-class speed -- he's faster than Bo, and I mean Bo was fast -- and he had this incredible self-discipline and mental toughness.

The greatest all-around player, I believe, was Charley Trippi. Talk about a runner, a passer, a punt returner, punter, kickoff returner... never been one like him. When I met him he said "Boy, I'd love to play in this offense today." He would have been ideal today, in that spread single wing which is also essentially what he starred in as a player.

So of the three greatest players I know, two of them are from the University of Georgia, and Cam Newton's from Auburn, the best one-year player.

It's ironic that college football is back to running the single wing, essentially the very first offensive formation.

Vince Dooley: It's a spread single wing, with other options off of it, that's exactly what it is. What happens in the evolution of sports is these things come back. But they come back a lot of times in different forms, like all these options.

Historically the defense usually catches up with the offense. So right now the spread single wing is a throwback to the old single wing people stopped using.

This makes five consecutive national championships for the SEC. Does that come down to the athletes or is it more about our culture of football down here?

Vince Dooley: A combination. The difference is up front, with these incredibly quick, good-size players that are quicker and bigger than most players in the country. And we've got more of ‘em.

The big question: Would you rather the Bulldogs have won it all this year, or are you just as happy Auburn won the national championship?

Vince Dooley: Absolutely not! I prefer Georgia, by far! And Tennessee if I had to pick two. Auburn would be third.

Vince Dooley: I've got a son coaching up there! My wife would divorce me in a hurry if I didn't say that! (laughs)