THERE’S AN early deadline this week, so I’m going to be a little lazy, and a little indulgent, and return to the subject of Savannah River Landing. However, after that I will move on to something brand-new and exciting, so read 'til the end!

Last Wednesday night at the November meeting of the Downtown Neighborhood Association (DNA), Ian Smith of the Mariner Group gave an update on the progress of The Second Coming of Savannah River Landing (see previous column).

There wasn’t much new to tell, other than the fact that the development group (Regent Partners) has now actually closed on the 54-acre property, and a home-builder has been selected for the eastern, all-residential side of the project. This is Patrick Malloy Communities.

You can see examples of their previous work at PMCommunities.com, but Smith says that a new “pattern book” of designs is being developed by the Cooper Carry architectural firm, based on what already exists in historic Savannah districts.

Given previous experiences, I was pretty impressed with the overall tone of this session, from the crowd. Very little outright hostility was shown towards Ian Smith, and the development plan. In fact, there seemed to be an overall air of acceptance of the scale of the project, and even concepts such as “wrapped” parking structures that go along with that scale.

Perhaps there was even some mild optimism (?) at the prospect of more shopping and dining options, as well as an increase in public greenspace and public access to the riverfront.

But just because there was little in the way of open hostility doesn’t mean there was no fun to be had, because after the presentation Mr. Smith took a number of questions from the attendees. Don’t we all miss the public meeting segments from “Parks & Recreation?” Of course we do.

(On a side note, it was not really a “public” meeting as you had to be a dues-paying member of DNA to attend, but you don’t have to live in the Historic District to do so. If you pay and attend all the meetings, you more than make back your money in pre-meeting booze and finger food.)

One citizen was a bit upset that the plan wasn’t “Savannah” enough. Now, I’m not sure how one can objectively measure Savannah-ness. As an experiment, perhaps readers could suggest things that embody Savannah-ness and give them a score from 1 to 10. I’m pretty sure that we will end up needing to build a Stone Stairs of Death into all future projects.

Of course the question of affordable housing came up—would there be any? Nope, answered Smith, the land cost precludes anything but market rate housing.

When these questions are asked at a forum like this, I always wonder how many people living in the Historic District are renting their garden apartments and carriage houses to food service workers, hotel employees, and public school teachers for below market rates.

Sustainability was brought up more than once—would the developer look to produce any power on-site by putting solar panels on top of the larger buildings?

This is not an absurd proposal, but Mr. Smith said that they had not considered it, but would be willing to consider leasing rooftop space for energy production.

He was then told by an audience member that the development could probably power itself completely, if he would just give Elon Musk a call, something could certainly be set up. Yep.

One woman asked Mr. Smith if the nearby water reclamation facility had been contacted and encouraged to do something about the smell. Mr. Smith said this issue had not been addressed. I, however, did some research.

According to the Squatty Potty Blog, for better smelling poop you should cut down on sulfur-rich foods, eat less processed food, eliminate trans fats, and perhaps just eat less generally. We can all help out.

And of course traffic on President’s Street was brought up—those that currently clog this arterial with their commuting don’t want to share it with potentially 2,500 new residents.

Since the buildout of this project is at least ten years, I wanted to yell, “Robot cars, people! Wake up!”

One puzzling thing was also uttered by Mr. Smith. When asked about flood risk, he seemed to insinuate that residents would not need to buy flood insurance. However, when I reviewed flood zone maps on SAGIS.org, Savannah River Landing is entirely within an “AE” designation requiring the purchase of flood insurance.

It’s possible that it is being developed in some way that lowers the risk, or that units not on ground level will not need insurance, but the issue certainly seems worth more attention, especially in regards to residential structures built at ground level.

Now that I’m done with a bit of light mockery, I’d like to thank the Downtown Neighborhood Association for hosting the event (and all their events) and for something that I did not realize the DNA is responsible for (not the City)—the Christmas decorations in downtown squares.

I’m not much of a Christmas guy, but that’s a bit of holiday spirit that even I enjoy.

But along the river is not the only place where we will be seeing an expansion of our concept of “downtown.” Among many other things that happened at the last City Council meeting, the Foram Group clinched the bid for purchasing the City’s surplus property at 2115 Bull Street (used by the SCMPD traffic division, across the street from The Vault). 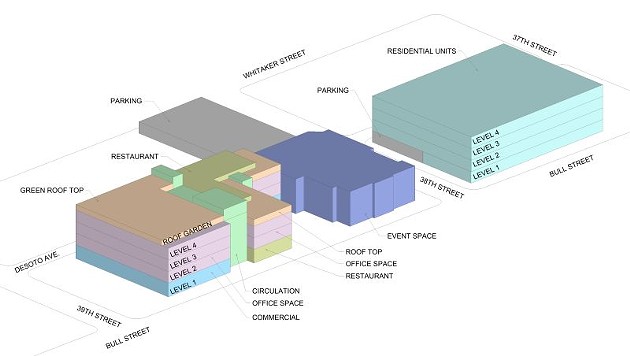 So, Foram is now ready to go public with the plans for that parcel, and most of the block just south of it. This is the complex constructed as Epworth United Methodist Church and most recently occupied by the New Covenant Church congregation.

The proposed mixed-use development, which the Foram Group is calling “Starland Village,” truly has a little bit of everything.

The striking gray stone assembly building will become a music venue and event space that will seat between 600 and 800 people, or allow over 900 to stand for a show. Foram reps say that it will be similar to the Orange Peel in downtown Asheville, as far as a size comparison.

Foram will also renovate the addition to the assembly hall, and build out the surface parking lot to the south (see illustration). This section will house a mix of uses—class A office space that will be split between private build-outs and shared areas that will act as incubators for small businesses. There will also be room for retail and a courtyard restaurant at the ground level, as well as another restaurant on the rooftop.

The residential component of the project will be built on the parcel just acquired from the City. There, Foram plans to build over 50 studio and one-bedroom apartments (yes, rentals!) with an on-site parking space for each.

Neighbors will find benefit in daytime (9 to 5) public access to a community rooftop park, including access to free wifi. Foram is also already in the process of working with community partners to enliven the site with public art including murals and sculpture.

Now before you roll your eyes at the gray-haired real estate developers throwing cool treats to the young neighborhood residents to engender support, let me tell you something.

Travis Stringer, CEO of the Foram Group, is under 40, as is his head of business development Melody Dawkins. In addition, Travis leads Foram from a live/work space within the neighborhood.

He IS one of the young residents that he’s trying to entice, so this project is as much about his own enjoyment as trying to fulfill the demands of some studied target demographic.

Expect to hear a lot more about this project. Travis will be presenting the plan to the Thomas Square Neighborhood Association shortly, and releasing more information to other media outlets as well.

He hopes that apartments will be ready for rental in the summer of 2019, and that the venue will host its first show the following fall.

Editor's Note: After The Gold Rush