Roth's work is on display at Gallery Espresso through Nov. 30.

MAGGIE ROTH’S work is proof that something as simple as a line can be intricately beautiful.

Roth, the featured artist for November at Gallery Espresso, is set to graduate from SCAD next year. She started out as an animation major but changed her course.

“During my sophomore year, I changed to illustration because animation was too tedious,” she says. “Drawing something over and over again for someone else’s creativity isn’t what I wanted to do. I wanted to create art for myself, for my own mind.” 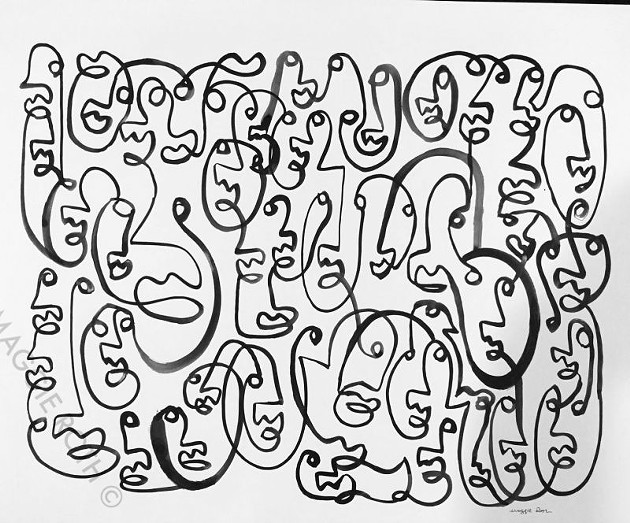 She further pursued that passion on her study abroad trip.

“I always did cartoons and stuff, but when I went to study abroad in Lacoste, my friend and I were doing blind contour lines,” Roth recalls. “Using that blind contour, I draw Lacoste in a nice line form and everyone really liked it. I was like, ‘Oh, maybe, this is something that could be cool.’ I really liked it because it was challenging and because everyone received it well. No one was doing it around me. It was nice to really challenge myself.”

Roth’s work is notable in that the figures are all one unbroken line.

“It depends on what I’m drawing. I figure out what I’m going to do first—do I want it to be covered in lines or do I want something more specific?” she shares. “The one of two people kissing, I had to sketch just the general idea, then create the line work. But normally, for a piece, once the pen goes down it’s all in the moment. I don’t know where it’s going. I might have a general idea, but I don’t really know. It usually takes a short time if I know what I’m doing, but for other pieces, like my big blue piece ‘Mobbed,’ that one took a while, only because it was layers of things. I painted the backgrounds, first layer, and second layer, but the initial line took under two minutes.”

The nature of Roth’s work makes her a bit of a perfectionist.

“There’s a piece I have that I initially drew but didn’t like it, but I had this board and I couldn’t waste it,” Roth says. “So I painted pink over it and then did the line. If I like how it is, it’s the end, but I’ll never know until it’s done. There’s a lot of throwing out paper. It might be good to someone else, but it might not be good enough for me.”

Roth has 13 pieces up at Gallery Espresso, including a collaborative piece with her professor.

“We got in touch last year through a mutual friend,” says Roth. “It was cool. He usually does black blobs and puts white on top, and mine is just the line work. It was just me putting the lines in next to his stuff but making it look like it could all go together. Just looking at it, you can see they’re obviously different, but it comes together.”

“I was contacted by Keep Shop, the boutique shop at the Alida, earlier in the summer,” says Roth. “I was really honored that they saw my line work and thought my work would suit the aesthetic for such an elegant establishment.”

The Alida is named after Alida Harper, an early historian and preservation figure in Savannah. Harper’s likeness graces the front cover of notebooks created especially for the shop.

“She was a pioneer in the restoration movement,” Roth says. “I’m happy I can create a piece that will forever represent someone so great and be presented by a wonderful place.”