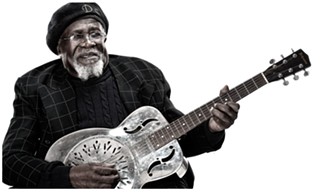 'No man in the world sounds like me but me.' Drink Small, still going strong at 81.

The blues is as much a part of Southern lore and culture as barbecue and beer. And for more than 60 years, South Carolina's Drink Small (yes, that's his real name) has carried the ball for the enduring Lowcountry blues team.

Small comes from tiny Bishopville, in the northeast corner of the state, and shares “local hero” status with Heisman Trophy winner Felix “Doc” Blanchard and artist Dalton Stevens (aka “The Button King”).

The 81-year-old singer and guitarist, known around the world as The Blues Doctor, still resides in Bishopville. In the 1950s, he was considered one of the South’s most lauded gospel guitarists, but by decade’s end he had dedicated himself fully to making blues recordings.

At the center of it all, then as now, was the man’s distinctive growl of a baritone voice. It’s reminiscent of both Howlin’ Wolf and Muddy Waters when he sings; in conversation, it’s like Fred Sanford in a blender (transcribing this recorded interview was a pleasure, and a challenge).

CS: I understand you transitioned from gospel guitar playing to straight-up blues in the '50s. Did you come from a gospel family?

Drink Small: I can't say a gospel family, but we sang gospel ... Me personal, I'm a kind of strange fella. There wasn't no transition in me, because I had it all the time. See, if it's in you, you can't get it out. If you listen to blues music, you can tell the ones that were born with it.

What I’m saying is, when it comes to the blues, some people are born with it. Cause if you ain’t got the real blues in you, you can’t change up and put in in you.

Now you take Muddy Waters, he had that coarse voice, and he sang from the heart. A lot of guys sing the words, and don’t care, and don’t know it. They get high class with it. High class.

See, that’s another-type blues. When it comes to me, that’s my life, that’s Drink Small, and no man in the world sounds like me but me.

CS: Did you always have that deep voice, and did it get deeper over the years?

Drink Small: God gave it to me! And when I get onstage, I demonstrate it. You can take some song, and make it be a blues. You can make a gospel singer be a blues singer.

A good singer can make a country song be a blues, by the tool of his voice, the way Ray Charles did a country/western and put the blues in it. And they took rock ‘n’ roll and made it rockabilly.

I like to tell that it’s the difference between Hee-haw and Ahh-ha. To the white people yodelin,’ and the black people moanin.’

CS: Did you keep your base in Bishopville, or did you eventually go to New York or Chicago?

Drink Small: No, no, no, everything was in Bishopville. But the way it was, see, I was a in a small pond, if you know what I mean. I had to get out of there because I was too advanced for the people there. And still am. You're talking to a foundation man! I'm not an imitator, I'm an originator.

Let me tell you about the blues. All music is a type of blues. All will get you an identity. That’s what really sells music. And what that means is, sound like yourself.

Like this song, “Little Red Rooster.” A lot of people play it, but mine’s different. It’s got slide—but it’s how I slide it. That’s what I’m saying—I got my identity, and I thank the Lord for it. And believe me: Don’t sound like nobody, be yourself.

I don’t care how technically good you are as a guitar player, when B.B. King sounds off, you know that. Identity!

More than blues: Bottles & Cans gear up for Quarantine Concert