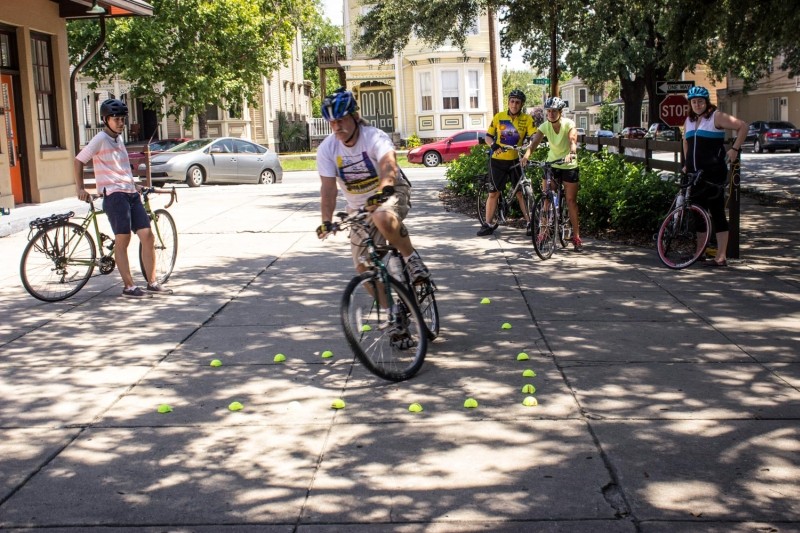 Ken Robichaux initiates an "Instant Turn," used if a driver turns left into the path of a person on a bike.

HERE'S WHAT I remember about the drivers education class I took in high school: The simulators that required students to steer along to scenes of suburban Los Angeles streets from the 1970s, which were projected on a classroom wall.

It was like driving through an episode of “The Brady Bunch,” except with a bored football coach occasionally barking commands.

Did I learn anything? Probably. It’s hard to say because that drivers ed class, the first and only formal training I received in motor vehicle operation, happened three decades ago.

I suspect my experience is fairly common. Do you know any adult who has voluntarily taken a refresher course? I don’t. Attending the Richard Petty Fantasy Racing Camp (yes, that’s a thing) does not count.

Last Friday and Saturday, however, grown people from around Savannah willingly submitted to more than eight hours of training on how to drive a different kind of vehicle: a bicycle.

The League of American Bicyclists’ Smart Cycling class covers principles of traffic law, crash avoidance maneuvers, basic bicycle maintenance and other topics. Participants receive classroom instruction, practice bike-handling skills on a closed course, and ride with traffic in a group to demonstrate concepts learned in the class. The class is taught by nationally certified instructors and is designed to make people safer and more confident when riding on city streets.

Reasons for taking the class vary. Some want to become cycling instructors themselves or simply want to make sure they are teaching their children best practices.

Others are eager to try bicycle commuting or using their bicycles to run errands, but are apprehensive about sharing the streets with people driving cars and trucks. 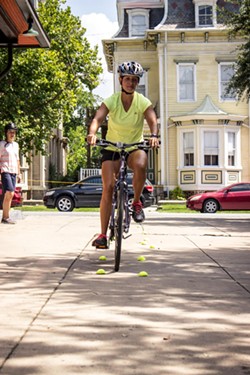 Caroline Jordan practices a maneuver called the "Rock Dodge," used to avoid roadway debris that could cause a person on a bike to crash.

The crash avoidance techniques taught in the class make full use of two significant advantages that people on bikes have at their disposal. When riding a bike, a person’s field of vision is uninterrupted by roof pillars or air fresheners dangling from the rearview mirror.

And under the control of someone who is properly trained, a bicycle is a magnificently nimble vehicle that can be easily steered clear of potentially dangerous situations.

Most people arrive at Smart Cycling classes with a general understanding of traffic laws. They know that whether they are riding a bike or driving a car, they are supposed to follow the same regulations, summarized by the phrase, “Same roads, same rules, same rights.”

Yet it’s not quite that simple. There are passages in the Official Code of Georgia that apply specifically to bicycles and within some of these passages there’s a certain level of nuance that is not always apparent.

For instance, some people read, “Every person operating a bicycle upon a roadway shall ride as near to the right side of the roadway as practicable...” and presume that they should hug the curb to get as far to the right as possible.

However, “as practicable” and “as possible” are not synonymous phrases, explained Brent Buice, executive director of Georgia Bikes and one of the instructors for last weekend’s class. It is up to each person to determine how far right in a lane is practicable.

In fact, the law permits people on bikes to move away from the right side of the street in a number of scenarios including avoiding debris or other hazards.

One of these hazards can be the street itself. When a “lane is too narrow to share safely with a motor vehicle,” says the law, a person on a bike may move to the center of the lane.

Doing otherwise may invite a driver to attempt a pass when there is not enough room.

While permitted by law, “taking the lane” as it is often called, is completely bewildering to some drivers. They complain about “fools riding their bikes in the middle of the street,” not recognizing that it may be the safest place for them to be.

Some of these complaints are issued directly to people on bikes via blaring horns or expletive laden tirades yelled from the windows of their cars.

As a result, graduates of the Smart Cycling class may find themselves in the uncomfortable position of receiving unsolicited advice on how to ride their bikes from people who have absolutely no idea what they are talking about.

Still, they know the law is on their side and, having completed the class, can talk about the legalities and practicalities of cycling with family members, friends, neighbors, classmates and coworkers.

With more Savannahians equipped with Smart Cycling knowledge and the ability to explain it to others, we will all be safer.