About the Earth Day Wheelie Bike Ride: The Eighth Annual Savannah Earth Day Wheelie Bike Ride will be held on Saturday, April 18. The free, family-friendly, police-escorted ride is part of the City of Savannah's Earth Day Festival and will depart from the south end of Forsyth Park at 3 p.m. An after-ride party, the Post Wheelie Dealie, will be held at Blowin' Smoke Southern Cantina, 1611 Habersham St. The total distance of the ride is approximately 5 miles. For more information email info@bicyclecampaign.org or visit the Earth Day Wheelie web page: bicyclecampaign.org/celebrate-earth-day-with-8th-annual-wheelie-ride-recycle-art-events/

Explore Savannah and learn about the sponsors of reCycle Art! 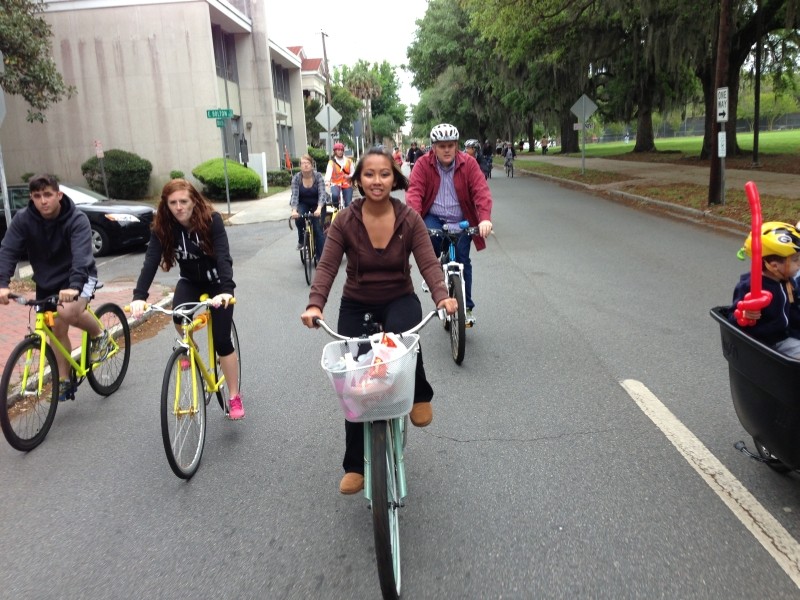 The Earth Day Wheelie was the first major event organized by the Savannah Bicycle Campaign and remains, in its eight year, one of the most popular. It departs from the south end of Forsyth Park at 3 p.m. this Saturday.

THE Savannah Bicycle Campaign's annual Earth Day Wheelie bike ride rolls again this Saturday at the conclusion of the City of Savannah's Earth Day Festival. At 3 p.m., hundreds of people on bikes will assemble at the south end of Forsyth Park for a 5-mile ride through historic Savannah neighborhoods.

The Earth Day Wheelie was the first major event organized by SBC and remains, in its eight year, one of the most popular. It’s easy to see why. People understand the environmental benefits of bicycling.

Or at least one of them.

The connection between bicycling and reducing air pollution is one that most people recognize instantly. Better air quality is good for the planet, good for people and especially good for people who suffer from respiratory conditions. The 1996 Olympics in Atlanta showed just how harmful car and truck emissions are to folks who have asthma and other conditions.

A study published in the Journal of the American Medical Association found that when car travel restrictions reduced morning traffic by 23 percent during the games, acute care visits for asthma decreased 41 percent.

Bicycling can also reduce water pollution. I shudder to think of the mix of coolant, motor oil, and brake fluid that steadily dripped, dripped, dripped from the undercarriage of my 1968 Ford Mustang when it was in a dormant state, its usual condition (Fluid leaks were among least of its mechanical issues).

Parking lots are excellent conveyors of these and other toxic substances into storm water systems and eventually, marshes and rivers.

Earlier this year the Savannah Tree Foundation’s Chatham County Canopy Summit announced alarming data on the rate of tree loss, with a significant portion felled to make way for parking lots. Chatham County already has nearly 5,000 acres of parking. Increasing rates of bicycle commuting and bicycling for other everyday trips can reduce demand for parking and preserve our tree canopy.

The science behind bicycling’s environmental benefits is, as they say, settled. But what about the art?

That’s the focus of a series of events leading up to Earth Day. The reCycle Art mini festival, which begins April 15, includes an exhibit and silent auction of bicycle-themed art, workshops, and musical performances.

“reCycle Art was born out of my graduate degree program at SCAD where I’m studying arts administration,” said Maggie Kantor, the festival’s organizer. “Through my coursework, I had some really great opportunities to work with both the Savannah Bicycle Campaign and Art Rise Savannah. I really loved working with both organizations and wanted to use my final project as a space to bring the two groups together in a unique way that also highlighted what I love about Savannah.”

The exhibit includes photographs, illustrations, mixed media and three-dimensional art, all available for purchase through the auction.

Kantor said, “There is so much diverse art here and so many different local businesses here that it seemed like the perfect chance for me to create a fun, free and accessible art festival that just also happens to feature lots of my favorite things!”