Eden Supper Club: Dining in the garden of goodness

The food industry exclusive event will take place on Sunday, June 16th at Southbound Brewing Company. The menu is set to include street food, stellar craft beer, and an experience that will surely be hard to beat.

To buy your tickets, go to www.edensupperclub.com

BREAKING BREAD at the dinner table is the ultimate unifier. The passing of good food across a bountiful spread knocks down walls and creates community.

Sitting down for a reservation at a local hotspot does not always give patrons the opportunity to connect within the community. The chefs remain in the back, cooking away, while patrons enjoy course after course that is meticulously created by those chefs. The relation between the two remains distant, at best.

The same can be said about patrons of a restaurant. It is rare that you find a community table or the opportunity to connect with your fellow foodies at a restaurant. I am the first to admit that I am too often guilty of linking with only those seated at my dinner table. 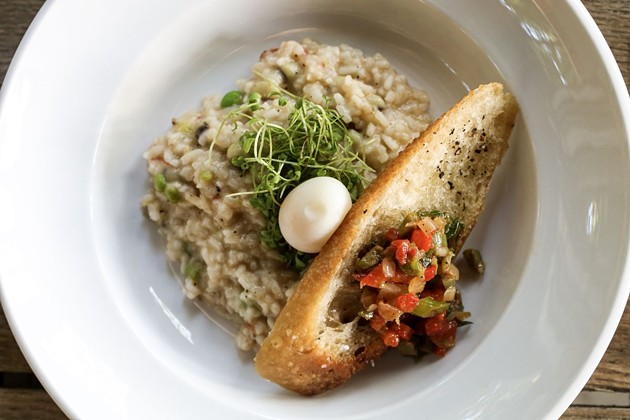 Last month I purchased tickets to a brand new pop-up supper club in Savannah—Eden Supper Club—and after attending the inspiring feast, I have cataloged the supper club as one of the few places in town that affords guests the opportunity to connect with the chefs, fellow patrons, and the food that is served.

Creator of Eden Supper Club, Chef Jared Jackson, started the unique dinner experience with a purpose that goes beyond the food that he is creating and serving.

“I started a supper club because I wanted to create something that other young chefs and go getters could use as a platform to be creative and let their ideas finally have a voice -- an opportunity to build a network and community of creative bodies who wanted to do something different,” he explains.

“The idea is to expand this beyond just the kitchen and into something that strengthens the cord between the smaller farmers and a new market of opportunity for them. The idea is just about connection.”

The new supper club entails all of the characteristics of popular pop-ups found all over the country: a secret location, a surprise set menu, and food that you can only get for one night; yet it is so much more.

I would summarize the Eden Supper Club experience as going to your coolest friends house to enjoy an intimate and thoughtful dinner created by expert hands, instead of that one friend that can “kind of” cook.

Chef Jackson explains his creation better than I can by saying that “each menu honestly starts with an idea surround the season we are in. This last Eden we had was based on the idea of spring through the eyes of Eden. The birth of a new season, which leads to the rebirth of new identity and new ideas.”

The night began with a cocktail inspired by a snow cone and a big beautiful cheese plate for sharing.

All of the cocktails were created by Andi Osby, including the first snow cone like drink called the Low Country Sipper. The thoughtful details executed throughout the night were evident in the use of the “Fancy Parker’s” chewy ice poured into the Low Country Sipper, which emulated the childhood experience of eating a snow cone.

The first course (and my favorite) was presented as a hearty bowl of gooey yet al dente Anson Mills Carolina Gold risotto speckled with fresh north Georgia field peas. Atop the pile of exquisite rice sat a perfectly poached quail egg and a crispy point of Auspicious Bakery baguette.

The night continued with the main, Georgia Plums and Cream, and was followed a delectable dessert called the Garden Doughnut. For the main, a roulade was created with mushrooms rolled inside of tender chicken. The dish featured locally gathered ingredients like fiddlehead fronds, king trumpet mushrooms, and a mystifying savory plum sauce.

“Some of the best time sourcing ingredients has been foraging for mushrooms or edible flowers,” he says.

“Our good friend Ancil, with Swampy Apple Seed at the farmers market, who not only grows his own, but does mushroom walks and teaches people about foraging and truffle hunting, collaborating with people in a way that’s long lasting and bigger than what’s on the plate.  It’s about sitting next to someone you don’t know, and enjoying a conversation about something bigger than the little bubbles we normally exist in.”

The dessert was a show stopper. Two oversized handmade doughnuts graciously shared a bowl with blackberry compote, smoked vanilla gelato, and a hibiscus and rose espuma. The finishing course could only be described as an expertly crafted inside out doughnut.

To round it out, again creating an experience, Osby paired the dish with a coffee inspired dessert cocktail called the Java, Java, OK...

Before we left that evening, full of food and fellowship in true Southern supper fashion, I made the decision that I will buy tickets to the next available pop-up. If after reading this you feel the same, Chef Jackson can tell you what the next Eden Supper Club will entail:

“This next Eden is really about building a community. It’s geared towards our fellow food and beverage peers (although anyone can grab a ticket from the website) because we wanted to take a second to say thank you to us.”