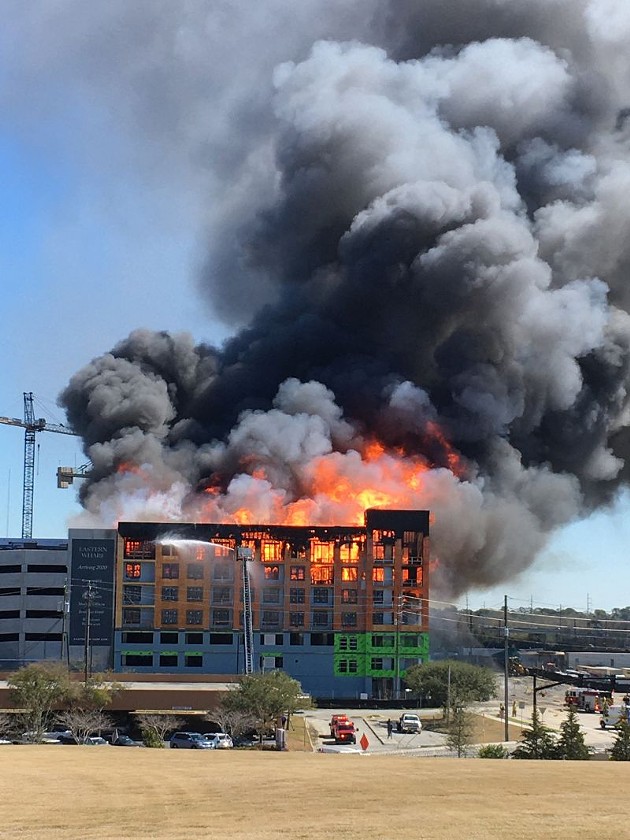 The view of the Eastern Wharf fire soon after it began, from Trustees Garden to the west.

THIS PAST WEEK, news in Savannah was dominated by the enormous fire that engulfed a portion of the Eastern Wharf development under construction.

While the Savannah Fire Department did their usual excellent job in extinguishing the blaze — which could easily have spread further than the single construction site affected — we shouldn’t stop just with congratulating them.

We should learn some valuable lessons from the incident.

For those unaware of the location — and a disturbingly large number of local people were unaware — Eastern Wharf is the development immediately to the east of the Historic District, just across from Trustees Garden. (We at Connect had an amazing, and frightening, view of the fire from our office in Trustees Garden.)

On the site of the defunct Savannah River Landing project, which was a casualty of the Great Recession, Eastern Wharf is quite simply, enormous. At nearly 70 acres, it’s double the size of Forsyth Park.

A costly investment by City taxpayers had already brought much of the site’s infrastructure up to par for Savannah River Landing. A more recent round of investment further prepared the site and its infamously swampy environs.

Despite the damage from the fire, Eastern Wharf’s developers insist they will stay on task and finish the project.

As a distinct and quasi-autonomous Planned Unit Development (PUD) by law, Eastern Wharf has the ability to set many of its own rules and regulations, such as an individualized sign ordinance.

Intended as a mixed-use residential/retail development, when complete Eastern Wharf will be an unintentional bookend of sorts with the similarly massive Plant Riverside project at the other end of River Street, a project of local developer Richard Kessler. (Despite persistent rumor to the contrary, Kessler is not involved with Eastern Wharf; that’s a separate investment group.)

Both projects also share something in common: Public/private parking garages paid for in part by City of Savannah bond issues — nearly $100 million worth for the two garages, one at each site.

Together, these two projects represent a massive investment and expenditure, and will increase the number of warm bodies on each side of the Historic District, as well as further stress the City’s infrastructure.

All this development happened concurrently with a push from the previous Mayor and Council to decrease the amount of fire coverage downtown, cost-cutting moves which included the mothballing of an engine unit as well as Savannah Fire’s Marine 1 fireboat.

Marine 1 actually made an appearance last week; a crew was mustered to bring it into action to help fight the fire.

However great a job Savannah Fire did last week, it’s important to note that fighting the blaze required 20 units all told — pretty much an all-hands-on-deck response from the entire department.

This included at least one fire truck that was stopped in traffic for a time while rushing to the blaze.

The reason? The notorious train that frequently causes traffic jams as it crosses President Street.

Savannah got lucky last week. While the fire was certainly no joke, no one was harmed. And also luckily, another serious blaze didn’t occur at the same time.

But with only a couple of twists of fate, the situation could have been more dire.

Maybe the wind could have shifted in a westward direction, and taken the flames across General McIntosh into Trustees Garden, which boasts the oldest wooden structure in Georgia at the Pirate’s House.

Or the wind could have blown north, and engulfed the Eastern Wharf parking garage and the adjacent Marriott.

Or the wind could have pushed the fire south, into several nearby homeless encampments and combustible wooded areas.

Or maybe Marine 1 would have been sold off by the City, and unavailable that day.

Or maybe that one fire truck held up by the President Street train might have been the one needed to turn the tide.

The lesson is that now isn’t the time to decrease emergency services.

If anything, we still don’t spend enough.

Savannah can move heaven and earth, it seems, to prepare ground for a new development.

But securing and staffing the infrastructure necessary to keep everyone safe, at the new developments and everywhere else, sometimes still seems like a bridge too far.