AFTER ABOUT a quarter century of reporting on the shenanigans of many dozens of elected officials, there is little any of them can say or do that really impresses me.

A journalist’s natural enemy is anyone in power — or should be, anyway. So I’m almost genetically predisposed to have a very healthy skepticism of just about anything any politician says or does, regardless of what party they belong to or how promising they appear to be on the surface.

This skepticism has served me well through the years, both professionally and personally.

But I can say I was genuinely impressed by the remarkable inaugural address of new Savannah Mayor Van R. Johnson II. 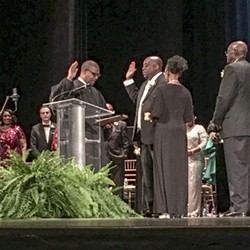 Mayor Johnson being sworn in by Judge John E. Morse

After floating the idea on Facebook and receiving an overwhelmingly positive response, I decided to take the highly unusual step of running Mayor Johnson’s speech in full in this issue.

(Or mostly in full – I edited out the lengthy thank-yous in the beginning, for space reasons.)

If your first response is “It’s just a speech — what counts is action,” obviously I would agree.

That is the case with literally any speech, made by anyone. So it’s a given in this instance as well.

But Johnson’s speech was important in its groundbreaking nature. It was unlike anything I’ve ever heard in decades of covering local politics.

We’ve certainly had leaders in Savannah before who espoused the value of tolerance, giving voice to the voiceless, and taking care of those less fortunate. So in that regard Mayor Johnson is far from the first to do so.

But what is remarkable, first off, is the frank specificity of his call for inclusion.

I don’t believe there has ever been a mayoral address in Savannah where lesbian, gay, bi, transgender and queer people were given specific, careful shout-outs, rather than generic pandering, if even that.

Secondly —and this is the really important piece — his call for inclusion wasn’t merely checking off boxes to make various groups feel like they’re getting some overdue attention, before inevitably being ignored once again.

My takeaway is that Johnson specifically called for marginalized groups to be stakeholders in policy decisions.

Think about that for a minute.

In practice this would mean that advocacy for the the homeless, for example, might include – gasp! – talking to actual homeless people and taking guidance from them, rather than just talking about them while they’re absent from the room.

Things such as this will cause quite a ruckus in certain circles.

Johnson also went out of his way to at least obliquely call out — in my reading, anyway — various establishment bodies who have held sway over local politics for many decades.

Most people refer to them as the “Good Ol’ Boy Network,” but these days it’s just as likely to contain in its ranks a young developer from Atlanta or Texas or California as a blue-blood product of a local private school.

Johnson was savvy enough to avoid mentioning these groups by name, as they still remain extremely powerful and can still cause a lot of damage. While not directly named, I assure you these groups took notice.

These unelected business leaders largely view themselves as a form of “permanent” government, with Mayors and Councils coming and going.

One of the main challenges facing Mayor Johnson and this Council will be to avoid being co-opted by these moneyed interests.

I also believe Johnson’s mention of the need for a Master Plan for Savannah was no casual reference.

As I heard it — and this is just my opinion — it was at least partially a reference to the outgoing Mayor and Council’s literal last-minute attempt at its final meeting to ram through a proposal to pay the local Chamber of Commerce and Savannah Economic Development Authority (which feature many of the same players) a million bucks to not only formulate a master plan, but run the independent body which would administer it.

On a larger point, these inaugural addresses are truly important, in that they set the tone for everything to follow.

It may be “just a speech,” but it’s an extremely key one, and the first official act of anyone elected to an executive office.

For example, I distinctly remember after Donald Trump’s election, when every media analyst insisted that his inaugural address would be the time he could finally put the divisiveness of the campaign behind him, and “bring the country together.”

But if anything, Trump’s inaugural address was even more divisive than anything said during the campaign.

In any case, it clearly set the tone for the next four years.

While any number of trials and tribulations are ahead for the Johnson administration — and we’ll be here to report on them objectively and hold those in power accountable — I think most of us can take solace, at least for now, in the tone set by Van Johnson in his inaugural address.