SAVANNAH has a lot bigger problems to worry about than a video promoting the new Savannah Arena.

One such bigger problem would be, say, the arena itself. (For more, see Jason Combs’ column this issue).

But sometimes you find elucidation in the strangest places. And one such strange place is the official concept video for the Savannah Arena.

Like most renderings and concept presentations, you have to take it with a large grain of salt and not get too worked up about it either way.

When I watched the video, however, a few odd things popped out at me. In and of themselves, they can probably be chalked up to glitches in the AI software that helped produce the videos.

But they also, accidentally, point out some unaddressed issues likely to come up when the actual brick and mortar arena is built.

When you watch the video, you see hundreds of CGI people walking around before a show. It’s quite impressive, actually.

They promenade around the exterior, they ride on the special-built bike lanes to arrive, they meander around the lobby, they look at their phones or stand around with a beverage having conversation.

Almost all of them are white. Literally almost every single one.

Now, I’m not saying we need to make a big controversy out of the video. In a year or so, no one will remember anything about it at all.

What I am saying is that, perhaps unintentionally, a message is being sent about who the likely “preferred” clientele is for the arena: Almost 100 percent white, in a city which is majority African American, in an area of town which is predominantly African American. 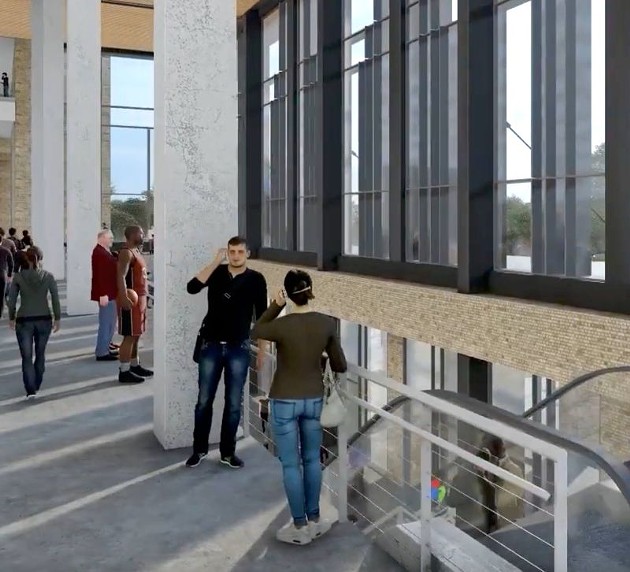 One of the very few African American CGI characters in the video is the man at left, in full basketball uniform, holding a basketball and standing in the Savannah Arena lobby.

Did I say all white? Turns out there is a small handful of African American CGI characters in the concept video.

One of them is standing by himself in the lobby at the top of some stairs, looking off into the distance. He is wearing a basketball uniform... and holding a basketball.

I kid you not – see for yourself at about the one minute mark.

It’s pretty weird. The first time I saw it, I thought I was hallucinating.

Again, it’s unlikely that this cartoonish stereotyping is intentional racism. Or at least we all hope and pray that it isn’t. Like I said, it’s probably just a glitch in the CGI.

The problem isn’t so much the graphics as it is the fact that no one caught any of this before releasing it to the public.

This is, after all, a project closing on on $200 million when all’s said and done. And no one could be bothered to look a bit more closely at the official video?

If you have enough time on your hands, you can spot some more anomalies. One in particular I found not only hilariously funny, but somewhat predictive of one of the issues surrounding the arena.

Almost certainly unintentionally, this bizarre image of a well-dressed man arriving at the Arena via an apparently about-to-sink wooden dinghy highlights the issues surrounding the use of the old industrial canal itself, and how it will relate to the new Savannah Arena.

In one segment, a well-dressed elderly man arrives at the show all by himself, in a vintage wooden dinghy via the adjacent canal.

He is solo, and apparently has no place to tie up his little boat, nor anyone to help him. It looks like some marsh grass is literally coming up through the bottom of the boat.

It’s silly and completely harmless, but also indicative of a more serious question: how does the canal fit into the vision of the “Canal District?”

How much of the canal is actually navigable, by vintage dinghy or canoe or whatever?

And what brave or foolhardy soul will actually dress up to go to an event with tickets probably costing at or over $100, and get there via a former industrial canal awash with mosquitoes and mud and pollution and who knows what else?

The controversy isn’t in the video, but in the way these larger issues seem not to have been thought through at all.

The video in and of itself is nothing to get too upset about. What is more concerning is how the arena concept was sold to the public with so many questions being left unaddressed, and unanswered.

Editor's Note: Oops! Arena may not have been approved by voters twice