MANY PEOPLE were surprised by the news last week that City Council approved the idea of completely demolishing the Civic Center and Johnny Mercer Theatre — whose roles are set to be filled by the Savannah Arena on the westside of town.

In place of the Civic Center and Mercer Theatre, we’re told, will be mixed-use development and at least a partial restoration of the revered Oglethorpe Plan. (Elbert Square, adjacent to the Civic Center, was mostly paved over in the ‘30s to make way for Highway 17.)

I think much of the public shock was due to sincere nostalgia for the Civic Center and Theatre — or rather, the important life events that took place there, not the dilapidated and soulless structure itself.

Another reason the public was taken aback has to do with the flawed nature of the process involving the new Arena.

There wasn’t enough public engagement on the question of what to do with the Civic Center site after the Arena is built.

What should have been the first question answered was instead an afterthought.

When the Arena was first envisioned, there was a widespread assumption that the new site would go right on the Civic Center footprint. This seemed a common-sense, cost-efficient solution, and one I personally supported.

You could make the case that it would also be historically correct. The same site had been used as a civic gathering place since the building of the Municipal Auditorium in 1916 (a beautiful building sadly demolished to make way for the inferior Civic Center).

Political considerations quickly came into play, as residents of West Savannah were “promised” the brand new Arena as a way to jumpstart economic development in that neglected part of town. 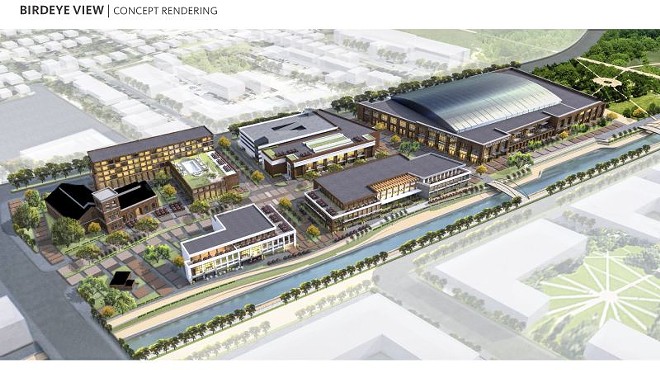 To be fair, there were economic considerations as well — many analysts said you just couldn’t fit a big enough modern facility, with enough parking, on the current Civic Center footprint.

What confused people the most, however, was that until last week, City Council itself had never decisively addressed what exactly should be done with the Civic Center after the new Arena is finished.

As late as last month, Alderman Van Johnson, mayoral candidate and strong supporter of the new Arena, was lobbying fellow members of Council to also keep the old Civic Center open, despite its nearly $2 million a year operating loss.

Personally, any nostalgia I may have had about the Civic Center and Johnny Mercer Theatre was outweighed long ago by constant disappointment in the site’s lackluster customer service, its unaddressed dilapidation, its bad acoustics, and its bizarrely inadequate concessions.

I for one will not mourn its passing.

I also embrace any well-intentioned plan to restore Oglethorpe’s original vision for Savannah, and we’re told that is exactly what is planned for the Civic Center site.

A restoration of Elbert Square will bring back a more organic, neighborhood feel to that part of downtown, and encourage more pedestrian activity.

A strict adherence to the original Oglethorpe Plan would serve to cut off any attempts at egregiously out-of-scale, high-rise development.

Critics say, with merit, that after the Civic Center’s gone downtown will lack a community compass point, that “Third Place” for important civic gatherings such as graduations, nonprofit benefits, and local grassroots festivals such as the Black Heritage Festival and Irish Festival.

I suspect the Cultural Arts Center around the corner will pick up some of the slack, but it is just too small to accomplish much in that department. 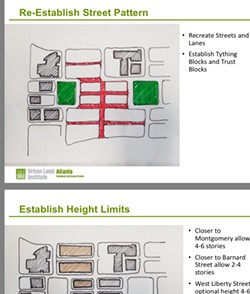 A screenshot from the Urban Land Institute report.

The City’s partnership with the Urban Land Institute, whose recommendations City Council is following, collected some interesting stakeholder input that in my mind makes it a good trade to lose the Civic Center in order to regain a square.

• “No hotels should be pursued; mixed use would be better. Once this site is razed, developers will come to us so there shouldn’t be any worries about interest.”

• “There is also a ‘missing middle’ problem, meaning there’s no place to live for workforce, college grads. This site may be worth $16-23 million, and we should get it back on the tax rolls.”

• “Can’t replace that feeling of excitement about coming downtown to go the theatre; it was a big deal and many people’s only occasion to come to this part of town. While the new Arena could provide a place for some of these community events, we must acknowledge a sense of loss if the site is razed.”

• “Would be good to re-establish some of the street grid that was lost and bring back elements of the Oglethorpe Plan. Also need shops that cater to locals... We don’t need office, hotel space as much as housing and retail.”

But the devil as always is in the details.

I would say that enforcing height limits and mandating a significant volume of tree planting are two non-negotiable points for the public to insist on.

We don’t have any real guarantee of what the new site plan will actually look like once politics and big developers and their attorneys start getting involved.

And with potentially very big changes after this November’s elections, it’s possible that a new Mayor and Council might reverse course entirely, making this whole conversation moot.

Whatever the future holds, there are few things sadder than the rotting hulks of obsolete ‘60s and ‘70s era civic centers still standing bereft in cities all over the U.S.

We should thank our old Civic Center for its decades of service, and be thankful that it will join the ghosts of buildings past.

And we should demand that the new Savannah Arena be held to much, much higher standards than we had become resigned to at the old Civic Center and Mercer Theatre.