THE SAVANNAH MALL is about to mark its 30th year, which some people would say is about 20 years too many.

But the timing is right, with discussions about how to repurpose dying malls being a topic of conversation all over the country.

In any case, Savannah never fully accepted the mall named for it.

The reasons are many:

• Savannah’s way too small a market to sustain two malls in the same area of town.

• The growth pattern in Chatham County went west, towards Pooler, rather than south through Georgetown and Richmond Hill, as was envisioned back in 1990.

• Malls all over the country are being gutted by online commerce.

Regardless, with the Savannah Mall clearly past its prime, and another of its anchor tenants, Burlington Coat Factory, leaving, we are left with the question of what, if anything, can be done with it.

First, it’s important to note that not all malls are dying. Oglethorpe Mall itself seems to be humming along. The same for the Tanger Outlets in Pooler.

The enormous Mall of Georgia, in Gwinnett County, does incredible business. One of the nation’s oldest malls, Lenox Square in Buckhead, still packs in the crowds an amazing 61 years after it first opened.

Most remaining successful malls in the U.S. seem to have two important buzz words in common: “Mixed use.”

The Mall of Georgia, for example, is a modern pedestrian mall, ringed with quality restaurants and bars a substantial cut above a TGIF or an Aunt Annie’s Pretzel stand. Lenox has several Yelp-worthy eating spots withing yards of the entrances.

The Tanger Outlets in Pooler are a short drive away from all kinds of entertainment options, from restaurants to bowling alleys to IMAX multiplexes with reclining seats.

The other two important buzzwords in Savannah right now are “affordable housing.” This issue is taking on more steam with the news that the Chatham Apartments near Forsyth Park — one of the last bona fide affordable housing units anywhere near the tourist area — is set to be developed into higher-end housing.

Along these lines, there is a nascent effort to somehow repurpose the Savannah Mall into affordable housing itself.

The rub of course, is that private dollars are unlikely to be the main driver, except in remarkable circumstances.

For example, Haven for Hope, a very successful transitional housing project in San Antonio, Texas, is based at a mall-like campus constructed mostly through the private dollars of a retired oil executive.

But in Savannah we’re much more likely to rely on the public/nonprofit model.

The idea of Savannah Mall as Georgia Southern student housing seems a non-starter, as the University already has vacant or underutilized student housing.

College enrollment is down nationwide, as is usually the case in a strong economy. But the Armstrong campus, in particular, has seen larger than average declines.

If anything, the Savannah Mall would seem more useful to Georgia Southern as classroom space than for student housing.

The other housing issue in Chatham County has to do with the homeless. There are several notable, successful examples of dead malls being turned into housing for the previously homeless.

One of the DC area’s oldest malls, the dead Landmark, has been used for two years as a homeless shelter by the charity Carpenter’s Shelter. They are set to move that operation to a new space later this year, as the old mall is to be redeveloped.

That story contains another interesting nugget that might also be of use to Savannah, with perhaps more relevance to the larger issue of affordable housing:

Carpenter’s Shelter’s original location in a former DMV building has been converted to affordable housing units, which is why it left for the Landmark Mall.

Might there be a surplus of old institutional buildings in Chatham County that could be converted into affordable housing, through a partnership arrangement?

This would eliminate the need to purchase the property from a private company, as would be the case with any repurposing of Savannah Mall.

That’s an interesting question for our new Savannah City Council.

Under the DeLoach/Hernandez era in City government, of course, surplus City property was unloaded to private investors, mostly for upscale projects, mostly through sweetheart deals, with taxpayers now having to subsidize rent payments for government offices which used to be housed in publicly owned buildings.

I’m not sure how much of those bad decisions can be overturned – probably not many – but if I were on City Council right now, I’d take a long, hard look at them.

For example, think what a gamechanger it would have been for the old utility building on Broughton to have been converted into affordable housing, smack in the middle of the tourist district.

How about old school buildings? Chatham County has a special tax, ESPLOST, that does little else but fund new school construction, which the district is currently awash in.

How about tying that into efforts to use vacated public schools as affordable and/or homeless housing?

Are all of these pipe dreams? Probably.

Candidly, they may all have to wait on a future consolidation of city/county government here.

But where there’s a will, there’s a way. Look at how fast all the new upscale apartments and hotels and SCAD dorms are going up — in the blink of an eye when the market’s right.

And when there’s a demand, there’s a market. In Savannah right now, there is at least as much of a demand for affordable housing as there is for upscale condos and/or Airbnbs. Many would argue, a much higher demand.

The trick is to make this demand able to be met in the real world, in a market economy. That will involve partnerships, compromise, and yes, some kind of regulation on new development — perhaps tying in the affordable housing component as part of the permitting process.

And that would involve defining exactly what we mean by affordable housing, which might be the best first step. 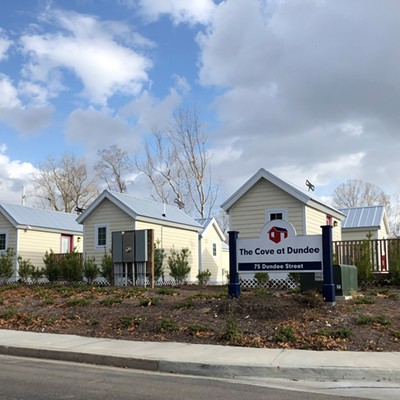